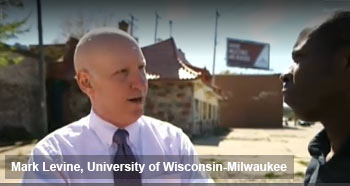 Marc Levine participates in the BBC News video presentation of “Inside the Mind of White America” in which racism and race relations in urban Milwaukee (and America in general) are discussed. Journalist Clive Myrie, of the BBC’s “This Week’s World,” asks the question “Does America have a race problem?” Clive delves into what white Americans understand – or don’t – about race. Other interviewees include Martha Barry (Racial Justice Director, YMCA), Rev. Dr. Alice Hunt (Chicago Theological Seminary), conservative talk host Charlie Sykes (WTMJ), and several insightful Milwaukee residents.

Clives Myrie concludes that in his exploration of racism in American, he has come to an understanding why many white Americans are clueless in regards to the issues that black Americans face, like issues of white privilege and the prejudicial treatment of black African-Americans. Even though he has come to an understanding of how this can happen, he also adds that not being aware of the issue doesn’t mean that nothing should be done about racism in America.