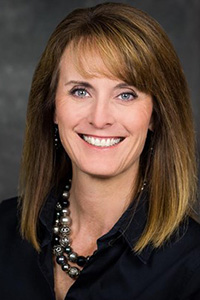 Prior to transitioning into an administrative role, Litzau spent 14 years as the head women's volleyball coach at Milwaukee, where her teams compiled a remarkable 118-14 (.894) record in Horizon League play over her last 10 seasons. She led her teams to a Horizon League regular-season title in each of her final four seasons at the helm of the program, while the Panthers also won 20 or more matches nine times in her final 10 campaigns.

UWM lost just five regular-season league matches over her last four seasons and under Litzau, the Panthers won 115 of their final 128 home matches. Only two Horizon League teams defeated UWM at the Klotsche Center after 1996.

Litzau was a seven-time Horizon League Coach of the Year honoree and guided Milwaukee to eight regular-season conference crowns and six NCAA appearances in her career. In 14 seasons at UWM, she racked up 271 wins after taking over a program that won just three matches the year prior to her arrival.

A standout volleyball player at the University of Notre Dame, Litzau was a team captain and earned team MVP honors as a senior. She earned her bachelor's degree from Notre Dame and later was awarded a master's in kinesiology from the University of Illinois.

She and her husband, Steve, have three daughters - Lauren, Danielle and Kayce - and a son - Nicholas.