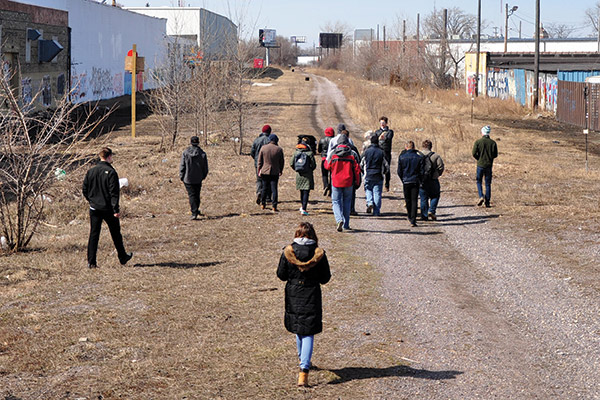 The SURF grant, Support for Undergraduate Research Fellows, is a University grant awarded to student researchers to participate on faculty research projects. Faculty in the Department of Architecture have been very successful in obtaining SURF grants.
This program is designed to foster faculty-student research collaborations, and, as such, the UWM Office of Undergraduate Research (OUR) is particularly eager to fund work through which students have the opportunity to engage in thoughtful and progressively sophisticated work central to the overall research program of the principal investigator. SURF awards are part of larger efforts to foster a culture of faculty-undergraduate research collaboration at UWM.

Two of Milwaukee’s unique assets, the confluence of public waterways and its performing arts communities have the opportunity to converge and newly energize the fabric of the city through the construction of a mobile performance space —the “Milwaukee Total Theater.”
A collective performance space able to travel along its public waterways allows the various communities to directly engage each other and the city as a living theater, offering unique experiences for performers, spectators, and future development of the city of Milwaukee.
The Milwaukee Total Theater would be organized and developed by a pubic-institutional-governmental alliance to oversee its program throughout the year and develop other means in which it can further reach and enrich more communities in Milwaukee. The project currently has fiscal, managerial, and programmatic support from local community organizations to bring research conducted at UWM into a realized project in spring 2016.

What if Urban Wood Waste didn’t have to go to the wood chipper, or worse, the landfill? What if it could serve a purpose? The BEEbrane seeks to do just that. Functioning in the space between Art and Architecture, the BEEbrane makes use of urban wood to create an installation that is simultaneously an urban honey bee habitat and an engaging public art piece.

The BEEbrane began by researching honey bees, their habitats, beekeeping techniques, and other types of tree hollow dwelling animals. Characteristics of natural honey bee hives, specifically their geometry and solar orientation, were examined with regard to the sizing and placement of the BEEbrane. Precedent research was the next step. A number of art installations by various artists and man-made honey bee hives were investigated to inspire innovative construction techniques.

Next, urban wood scraps were collected from a local tree service to produce a series of small scale studies that explored formal potentials. From there, larger experiments were produced to meet the functional needs of the honey bees and further explore the project’s artistic expression. Investigations were then done using the offcuts from the original form studies to demonstrate how the “waste” pieces could achieve some of the desired effects.

At the onset of our work we looked to the past to inform the present. Ant Farm’s Inflatocookbook (1971), a do-it-yourself manual for creating inflatable (a.k.a. pneumatic) architecture, was a jumping-off point for us. Our goal was to improve upon their methods and to bring the pneumatic into the 21st century. As opposed to the single membrane construction primarily seen in the Inflatocookbook, we decided to pursue a double membrane surface because it offered more possibilities for optimum formal, structural, and thermal performance. We used heat seaming to meld two layers of plastic sheeting together, leaving space between the seams. This spacing determined the size of the air-filled ribbing, which in turn impacted the rigidity of the construction. Because plastic itself serves as poor insulation, both from radiant solar energy and low temperatures, we were able to channel the excess pressure created by the blower into small vents on the inside of the structure. This method regulated airflow and helped to ventilate the interior. After spending time inside the structure on a hot summer day, we found that although the venting helped, the transparency of the plastic allowed for uncomfortable amounts of solar gain. Another problem that we encountered was its propensity to collapse under high winds. In the future, we hope to address both of these issues with a change in material—a move away from plastic and towards coated fabric. This would provide less transparency and a heavier skin to support the pneumatic structure against the elements.

The Next Generation of Domesticity

Mo Zell’s research with Kelsey Keuhn interrogates the history of microhousing with a focus on free-standing units while positing a new typology of units that work collectively to create a sustainable and affordable community.
Reflecting distinct personalities of its end users, these units of micro-housing are actually six-paired prototypes. The six units magnify two conditions—one is the gable roof as an identifier of house and home, and the other is the reliance of the units to work collectively in creating a sustainable, viable community. The units not only work together as pairs but collectively as 12 units to harvest energy, water, and food. Each of the six prototypes takes on an identity from different parts of a House while working in unison with another part of the House to create shared, public space between them. For example, The Dining Room, an A-frame unit, prioritizes the table as the communal space while collecting solar energy on its expansive vertical surfaces. The horizontal surface of reclaimed wood extends into the public realm creating more opportunities for gathering. The Dining Room unit is positioned to optimize solar gain at the edge of the site while capping the public space with this community table.

Kelsey’s role included the design and creation of artifacts for a traveling exhibition on microhousing.