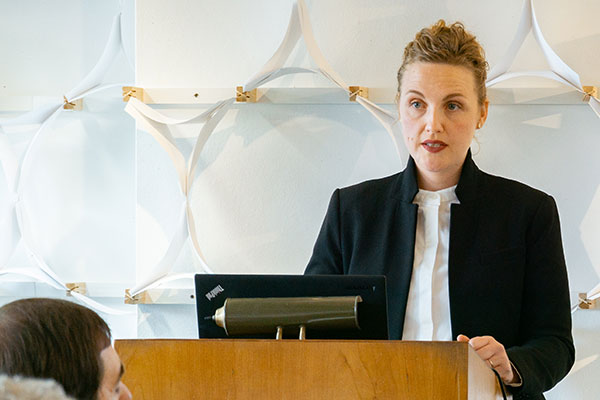 Trudy Watt joins SARUP as an assistant professor this year. Since 2015, Watt has been the co-founding principal of Waxwood, an architecture and design research studio that cultivates equitable access to well-being through advancements in architecture and interdisciplinary collaboration. She seeks to expose traditionally cloistered design knowledge to a diverse community, building a foundation of public discourse and curious investigation to evoke a robust future for all. Broadly summarized, her primary work areas are health equity, architectural diplomacy and fantasy.

In 2016, Watt became the first resident architectural designer within a research unit (MEDstudio@JEFF, Sidney Kimmel Medical College) in Thomas Jefferson University’s nearly 200 year history. Soon thereafter, she became the first fellow in Emergent Design + Creative Technology in Architecture + Medicine and associate director, working in collaboration with the MEDstudio@JEFF team to advance the mission of the organization, develop and manage programming and public installations and further the research of MEDstudio@JEFF around an emerging discipline between architecture and the life sciences.

Watt graduated with honors from the University of Illinois–Chicago in 2011 and Princeton University in 2013. Before joining the faculty at SARUP, she taught in the architecture departments at Princeton, Columbia GSAPP, Jefferson University and the University of Pennsylvania and her work has been exhibited both in the United States and internationally.

At SARUP, Watt is looking forward to learning Milwaukee and her new community of colleagues, students and neighbors. She is especially excited to combine architectural diplomacy with the future of aging in the built environment to investigate the influence of memory, power and the social determinants of health in architecture and urban design.