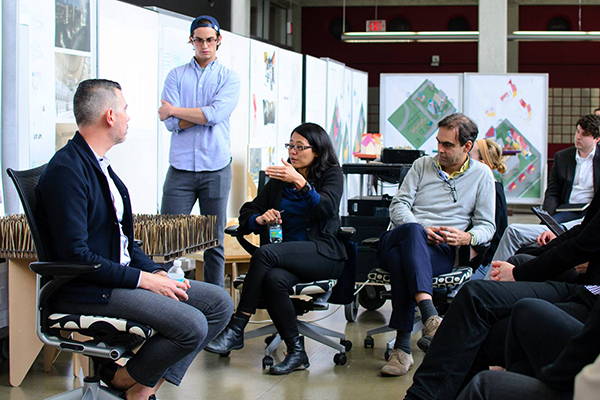 SUPERjury is a day-long review and celebration of the most provocative undergraduate and graduate projects in the school. With projects nominated for consideration by both students and faculty, the goal of SUPERjury is to foster self-reflection and stimulate a conversation about the state of architecture within the school and also how our work relates to contemporary issues in practice and the world. Students who are selected to participate in the review are recognized with honors and cash prizes. It’s a very significant event for the School of Architecture & Urban Planning.

After an initial term as Louis. I. Kahn Visiting Assistant Professor, Mr. Bald has continued to teach design studios and visualization at the School. Previously, he taught design and theory at Cornell University, Columbia University, the University of Michigan, and Parsons. Mr. Bald is a partner in the New York-based Studio SUMO, which has been featured as one of Architectural Record’s Design Vanguard and the Architectural League of New York’s Emerging Voices. In 2015, SUMO was awarded the Annual Prize in Architecture from the American Academy of Arts and Letters. His firm has also received a Young Architects award from the Architectural League, fellowships from NYFA and NYSCA, and was a finalist in the Museum of Modern Art’s Young Architects program. SUMO’s work, which ranges from installations to institutional buildings, has been exhibited in the National Building Museum, MoMA, the Venice Biennale, the Field Museum, the GA Gallery, and the Urban Center. Mr. Bald has an enduring research interest in modernism, popular culture, and nation-making in Brazil, for which he received fellowships from the Fullbright and Graham Foundations and published a series of articles.

Maya combines her backgrounds to explore how the increased availability of data and the emergence of computational design transforms the theoretical frameworks, methodologies, tools and outcomes of the architect. In 2018 she was awarded a multi-year grant from Canada’s Social Sciences and Humanities Research Council (SSHRC) for her Soft Materials project to develop architecture-specific methods for achieving more complete engagement with both the sociocultural agency and technical capacity of the computational components embedded within data-driven design work. With the goal of bridging technological and sociocultural concerns, this work has been presented in a variety of venues including technically focused venues such as ACADIA and CAADRIA alongside socially-minded venues such as Architecture Media Politics & Society(A_MPS) and the Architectural Humanities Research Association. Maya’s design work brings together software, data, hardware and physical materiality to explore citizen-oriented visions of a software/data enabled city.

Maya is a founding editor of [bracket] (Actar), a series that, since 2010, has documented the intersection of architecture, environment and digital culture. She has co-edited two issues: Bracket 1 [On Farming] and Bracket 3 [At Extremes], both supported by the Graham Foundation for the Arts.

Nader Tehrani is the Dean of the Irwin S. Chanin School of Architecture at the Cooper Union in New York. Tehrani is also Principal of NADAAA, a practice dedicated to the advancement of design innovation, interdisciplinary collaboration, and an intensive dialogue with the construction industry. He was previously a professor of architecture at MIT, where he served as Head of the Department from 2010-2014. Tehrani’s work has been recognized with notable awards, including the Cooper Hewitt National Design Award in Architecture (2007), the United States Artists Fellowship in Architecture and Design, and the American Academy of Arts and Letters Award in Architecture. He has also received the Harleston Parker Award for the Northeastern University Multi-faith Spiritual Center and the Hobson Award for the Georgia Institute of Technology Hinman Research Building.

Throughout his career, Tehrani has received eighteen Progressive Architecture Awards as well as numerous AIA, BSA and ID awards. Over the past six years, NADAAA has consistently ranked as a top design firm in Architect Magazine’s Top 50 U.S. Firms List. He served as the Frank O. Gehry International Visiting Chair in Architectural Design at the University of Toronto and is currently the inaugural Paul Helmle Fellow at California State Polytechnic University, Pomona. He also recently served as the William A. Bernoudy Architect in Residence at the American Academy in Rome.

This event is cosponsored with the American Institute of Architecture Students at UWM.