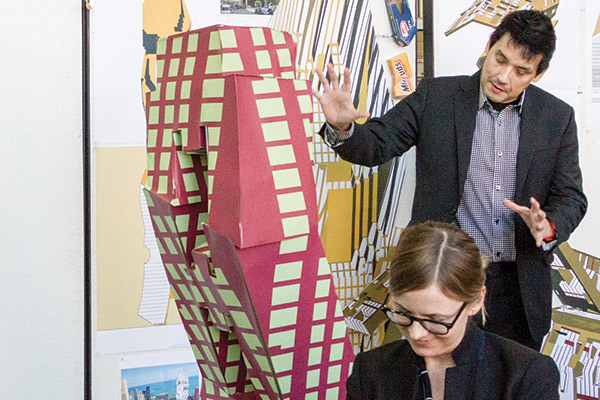 Following the success of last year’s inaugural MASTERcrit event at SARUP that hosted MOS Architects, MASTERcrit_2016 took place at the beginning of the spring semester, whereby prominent architect Andrew Zago was invited to work on a project with some of the School’s best students.

Modeled on the traditional notion of a “Master Class,” and conceived by Assistant Professor Jasmine Benyamin, MASTERcrit_2016 encompassed lectures, critiques and a workshop—all of which took place over the span of a four-day period. As with last year, the MASTERcritic was tasked with presenting a project brief to the charrette team that in some way reflected a current pre-occupation in his or her practice and research.

The intent of the project was in part to bridge the discursive gaps between making, thinking, and building in a unique institutional setting. Ultimately, the students engaged a set of questions within and outside the project proposal while the work was evaluated via the fairly conventional confines of a “crit.” A primary goal of the event as a whole was to ask: how and in what ways could design—as discipline and practice – mediate pedagogy and the profession? Operating within the moniker of “Big Dumb Building,” Andrew Zago presented the MASTERcrit team with the following prompt: can cities be defined as agglomerations of “shaped things” made up of buildings behaving not unlike unruly guests at a party?

Zago thus positioned the charrette as a conversation in and through ideas, images, and objects. The resultant work manifested a mash-up of popular culture, intermingled with past and present zeitgeists. What he coined “awkward displays of expertise” were encircled by “Back to the Future” form-making via Godzilla, full frontal façadism, slapstick tectonics, and “too big to fail” scale.

Contemporary cities are complex organisms that defy any easy analysis or singular characterization. In the past hundred years cities have grown to dwarf the scale of historic human settlements, stretching to the limits of comprehension. Nonetheless there remains the physical fact of cities. They are composed not only of flows of capital, information, peoples, and resources, but also of the brute, inert, mass of buildings, streets, and infrastructure. These shaped things are unavoidable presences and, after they are shaped, to quote Churchill, “they shape us.” Given the breadth of pressing urban concerns, architecture may sometimes seem to be of minor importance. This workshop argues instead that architecture is an urgently needed element in cities and that it can uniquely provide them with defining new diagrams.

Since the latter half of the twentieth century, the very big building, in a city (the VBBC) has been variously theorized, embraced, ignored, grudgingly accepted, and vilified. By now we recognize it an inevitable, if occasional, product of advanced technologies, programmatic agglomerations, and flows of capital. This workshop proposes that there are still unrealized diagrams for the VBBC, ones in which such a building can become an unruly guest at a city’s party.

This workshop proposes that such belligerent tectonic behavior can have novel consequences when foisted onto an urban fabric. What begins as harmless jostling when the buildings are considered in isolation, becomes boorish and potentially destructive behavior in the city. Not just the bigness theorized in S,M,L,XL but big explicitly as an affront to urban decorum and safety. Our model for this will be Godzilla. Sears Tower, Again. While Chicago can claim credit for significantly contributing to our understanding of the VBBC it has never—2011’s dreary Transformers: Dark of the Moon notwithstanding—been properly visited by a giant monster. This workshop will redress this slight by reimagining the Sears (Willis) Tower, again.