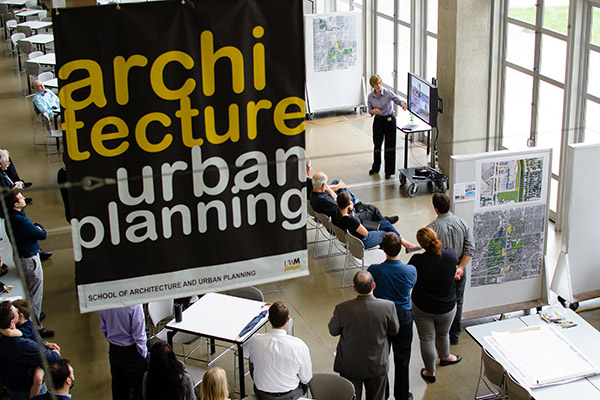 What is Community Design Solutions?

Milwaukee Public School’s Department of Recreation worked with CDS to create a new vision for Columbia Playfield. The design process included extensive community involvement that engaged youth and neighborhood members. Two concepts were developed, one with a strong geometric layout with hard surfaces and recreation areas on half and grass on the remaining areas. The second concept captured the multi-generational potential of the park with a network of pathways and recreational areas. Both include a variety of open space areas to allow a variety of programming.

The Goat Palace is a warehouse structure reinvented as an exciting events space in Milwaukee’s Riverworks creative district. Building uses include an event space, catering, bar, lounge, small office, storage, and an additional meeting room. Two plan schemes were developed, but several plan layouts ultimately emerged due to the extreme flexibility of the space. Because of its flexibility, the main hall can be used for weddings, presentations and lectures, conferences, and performances.
Milwaukee Park Signs

Community Design Solutions (CDS) worked with DPW to create a sign concept that differentiates city parks from their county counterparts. The design concept includes a logo that can be used consistently across the various city parks and begins with the familiar oak leaf logo of the Milwaukee County Parks. The upper portion of the leaf is replaced with a series of iconic Milwaukee buildings. Colors for the logo are drawn from the People’s Flag of Milwaukee. The sign concept has gone out to bid with the hope of some proto-types being built this summer.

Colorful play equipment and seating areas provide a new identity for a vacant park at 17th and Vine. CDS worked with MKE Plays, City of Milwaukee, to develop the new playground concept.

Community Design Solutions worked with Goodland Mobile Market to design a mobile grocery store that provides a new, fresh grocery option for food deserts in Milwaukee. This mobile grocery store will be constructed using an existing Milwaukee County Transit System (MCTS) bus. The exterior reflects a market or traveling trolley, not to be mistaken as an advertisement or MCTS bus. The passenger side is designed to engage the public with a retractable awning and hanging baskets, the interior is organized to provide an accessible venue with containers for both fresh and refrigerated items.

Calvary Baptist Church has a vision to provide a community center and wellness clinic within their Teutonia Avenue neighborhood. The goal for the community center is to enrich the lives of both the church membership and the neighboring community. CDS concepts include a large multi-purpose space to host a variety of functions; social gatherings, children’s activities and worship, along with several classrooms, a resource center, outdoor play area and several patient and doctor rooms as part of the wellness clinic.

CDS’s seventh Community Design and Development Charette focused on how to transform the South 27th Street corridor from a suburban auto-dominated corridor into a series of walkable destinations. After revisiting past plans for the area, examining the business diversity of the neighborhood, and conducting a series of Focus Groups to gather input from various stakeholders including lenders, developers, residents, city officials, agency leaders, and business owners, a day long charette was held at the UW-Milwaukee School of Architecture and Urban Planning on September 8th, 2016. Architectural firms that participated included: Engberg Anderson, Zimmerman Architectural Studios, Eppstein Uhen, Uihlein Wilson, Kubala Washatko, and GRAEF. Concepts included a model for redeveloping retail strip centers, integrating housing along the enhanced Wilson Creek, including destination retail and medical uses, redeveloping key gateway sites, and providing opportunities for public spaces that can be programmed and serve as destinations for both residents and visitors to the corridor.