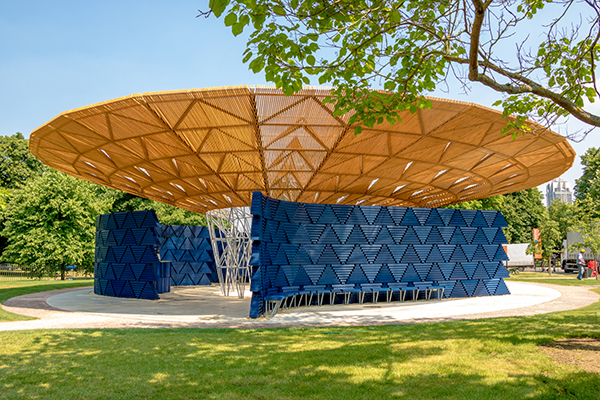 Blake Villwock and Adriana Arteaga graduated from SARUP in 2012 after completing their joint thesis as part of the Marcus Prize Studio under the direction of Burkina Faso-born architect Francis Kéré and SARUP Professor Chris Cornelius. Through the Marcus Prize Studio they had the opportunity to connect with Barkow Leibinger and Kéré Architecture, two internationally-renowned offices located in Berlin. When Blake and Adriana made the decision together to find work abroad, they sought the help of Cologne-based SARUP 1998 alumnus Scott W. Pollock who guided them through the process of obtaining residency papers to live and work in Germany.

During his time at Barkow Leibinger, Blake quickly rose through the ranks from working in the model shop to leading design and research for high-performance façades, prototypes, and pavilions. Notable projects include a museum for Mercedez-Benz in Stuttgart, a residential high-rise on Alexanderplatz in Berlin, a temporary summer house commissioned by the Serpentine Galleries in London, and a kinetic wall for the 14th International Architecture Exhibition Fundamentals (2014) curated by Rem Koolhaas in Venice.

Adriana’s responsibilites at Kéré Architecture initially ranged from supporting the designers to handling all English-language correspondence for the office. Eventually she took over all press relations—coordinating publications for print and web, managing the website, establishing a social media presence, ghost-writing for Francis Kéré and assisting him with public lectures and interviews. She assisted with design, writing, and producing press materials for projects such as the Obama Legacy Campus in Kogelo, Kenya. She also worked closely with cultural institutions such as Copenhagen’s Louisiana Museum of Modern Art, selecting and curating archival material and leading the design of an architectural installation for the exhibition Africa: Architecture, Culture, Identity (2015).

After three years at Barkow Leibinger, Blake decided to make the jump to Kéré Architecture’s growing studio. With increasing demands and interest from the US and the UK, Adriana and Blake embarked on managing and leading projects in English-speaking countries in addition to supporting the other design teams for projects in Europe and Africa. Significant projects they’ve worked on include the Burkina Faso National Assembly and Memorial Park in the capital city of Ouagadougou, which was exhibited at the 15th International Architecture Exhibition Reporting from the Front (2016) in Venice, curated by Alejandro Aravena. They also produced other exhibitions and architectural installations including: Place for Gathering at the 1st Chicago Architecture Biennial; The State of the Art of Architecture (2015), the Colorscape, and Francis Kéré: Building for Community (2016) at the Philadelphia Museum of Art; and Radically Simple (2016) at the Architekturmuseum der TU Munich. When the Serpentine Galleries selected Francis Kéré to design the 2017 Serpentine Pavilion in London, Blake and Adriana led the design and worked closely with engineers and fabricators during the notoriously short six-month project schedule.

Blake and Adriana will be back in the midwest this year for the 2nd Chicago Architecture Biennial Make New History.

Class Notes are a way to share what’s going on in your life with your SARUP classmates. Here are some common class notes submissions: Promotion, Birth announcement, Wedding announcement, Published an article, paper, book, etc., Featured/listed in a publication, Became a member of a committee or organization, Retirement notice, Honor Recipient (grant, medal, etc.), Moving/Relocation (new job), Received a degree. You can submit any other additional information.