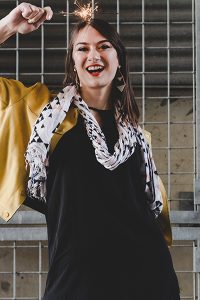 Kali Desorcy is an illustrator and graphic designer graduating from the University of Wisconsin – Milwaukee in May 2019. Within both illustration and graphic design work, emphasis is placed on clear communication, vibrant colors, and extra attention to detail. She believes that illustration gives projects the opportunity to stand out through the limitless possibilities of depiction and can provide the right drive, emotion, and spirit that a project needs to flourish.

Throughout her time at UWM, Kali has had the opportunity to utilize her talents in a myriad of places. In the January of 2017 she began working as the Marketing Coordinator and Graphic Designer for the UWM Student Union Art Gallery, where she designed numerous print and digital advertisements for upcoming exhibitions while also assisting in the assembly of said exhibitions. In January of the following year, she began work at the Florentine Opera Company as a Graphic Design Intern, in which she produced marketing material for upcoming operas and events.

In her free time, Kali spends most of her time illustrating and learning about visual development. Her work has primarily been strictly two-dimensional, but she has an interest in exploring the outside of her comfort zone and learning more about 3D-modeling after graduation. She is open to collaborating with other creators and companies, so feel free to contact her at kalidesorcy@gmail.com. When she isn’t doing any of these things, she’s probably playing with her cats Jiji and Benji.

My manifesto Take a Break is a 10-page comic that details the ebb and flow of a creative’s schedule. The emphasis of taking breaks when working on a project is often viewed and divided by two parties- one party that values the notion of hard-work and constant grit, and one that views breaks as being vital to perform at one’s best by providing a resting point. Usually it is agreed that a combination of both is healthy in a creative’s work process, but very often occurring as well is the cognitive dissonance of creatives preaching the practice of taking breaks while not doing it themselves. Take a Break is a discussion about this practice by two parties. It details the thought-process a creative may encounter when deciding whether a break is deserved and if it needs to be deserved.