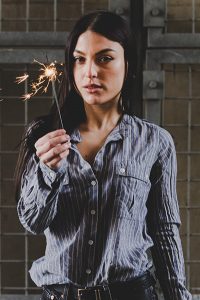 Abby Wajer is a Design & Visual Communications student at the University of Wisconsin- Milwaukee. She sees design as an opportunity to use her love for art and commitment to progression to create, inspire, and promote the changes she wants to see in the world.

Abby has been encouraged to explore her creative nature from a young age. Her education has always been marked by a strong arts presence. Originally she planned on attending college to study Drawing and Painting, but decided to follow a different path after taking a class called Digital Arts: Culture, Theory, Practice. The class taught her about the connection between empathy and design, the ability to embed meaning into content, and the software skills to start her on her DVC journey.  The mentioned teachings that inspired Abby to pursue her career in design are the same things she has been practicing through her work at UWM, and more recently on the design team at Stone Creek Coffee.

More often than not, the work I create is for other people. I love the collaborative aspect of design, the empathetic nature it requires, and the ability to solve a visual problem for someone else. However, I was very ready to dive in the opposite direction for this project and embrace my introversion while writing and designing my manifesto. The intentions behind my manifesto were to create an artifact that is fully representative of who I am in it’s concept, text, style, and design and to define/execute the style I set for myself successfully.

I created a series of twenty-two cards, each one reflective of one of the lines from my manifesto. Some sources of inspiration for my manifesto were found in vintage typography and logo design, American traditional tattoo style, minimalist illustration, and tarot cards. The twenty-two cards act as an homage to the Major Arcana deck found in tarot cards which consists of the same number. “Major Arcana” translates to secrets or mysteries, and represents life lessons, archetypal motifs that influence life, and the journey to enlightenment during tarot readings. My manifesto is my major arcana, and it will be able to provide some clarity about who I am, what I stand for, and who I strive to be to the viewers who interact it.