Home » Blogs » The Facts of the Northern Lights

Aurora Borealis, aka the Northern Lights, is one of the most mysterious objects in the sky. Let’s take a moment to illuminate some knowledge on the illumination.

Aurora Borealis forms when electrons from the sun collide with molecules in the Earth’s atmosphere. Solar electrons are carried by solar wind to the Earth’s magnetic field, becoming energized as they move through the magnetosphere. They move towards the magnetic north and south poles and then collide with atoms and molecules of oxygen and nitrogen. The energy from solar electrons are transferred to the electrons of oxygen and nitrogen, exciting them to high energy levels. As the electrons of nitrogen and oxygen return to their original energy levels, light is emitted. The process is similar to how neon lights work.

The aurora get its color depending on what atoms collide with the solar electrons. The most common color, yellowish-green, comes from oxygen molecules while blue or purplish-red colors come from nitrogen. All-red auroras are formed by oxygen molecules at heights of up to 200 miles (auroras usually occur from 50 to 310 miles above the Earth’s surface). 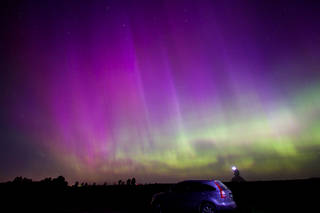 The oldest depiction of Aurora Borealis was in cave paintings dating back around 30,000 B.C. But the oldest official citing of the aurora wasn’t made until 2600 B.C. in China. Galileo Galilei was the first to give the name “Aurora Borealis” to the phenomenon in 1619 A.D. Then in 1790 A.D., Henry Cavendish made quantifiable observations of the aurora. And then in 1902-1903, Kristian Birkeland found that the light from the auroras was caused by currents flowing through the gas of the upper atmosphere. 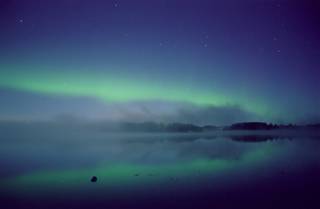 The best places to watch Aurora Borealis in North America include the Yukon, Nunavut, Northwest Territories and Alaska. It can also be seen in the southern tip of Greenland and Iceland, the northern coast of Norway and over the coastal waters north of Siberia. However, Aurora Borealis has been seen in areas much farther down, including Georgia, Alabama and Arkansas in 2011. In fact, the furthest south Aurora Borealis has been seen is in Colombia in 1859. As for the Southern Lights, also known as Aurora Australis, is not often seen as they mostly occur in a ring around Antarctica and the southern Indian Ocean.

We hope you enjoyed our insight into the science and culture of Aurora Borealis. For even more facts, check out our Northern Lights show that streamed on YouTube in March 2021!

Constellations of the Zodiac: Aquarius Friday, January 28, 2022 $6 General/$5 UWM Students 7:00 - 8:00 p.m. CT Delve into the astronomy and mythology behind the zodiac and learn how to find your zodiac constellation in the night sky. In […]