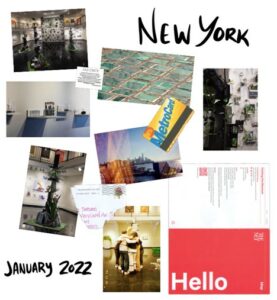 The first or second day I was working for Nathaniel Stern, he asked me if I wanted to go to New York. Being freshly out of high school, eager to please and I mean, really, what would you say? I said yes, half-jokingly, a smile on my face. Little did I know a little over 6 months later I would be stepping on a plane to go to Binghamton, New York, and New York City with my colleagues. I couldn’t believe what was happening the entire time simply because it felt too good to be true.

January 13th, 2022
We left Milwaukee early on January 13th. I hadn’t slept the night before due to a mix of nerves and excitement. I remember the jet bridge being cold as we boarded the place. We had a layover in Detroit. I slept on the second flight. When we arrived in Binghamton everyone seemed to be in good spirits. Mary Widner and Nathaniel Stern had driven the exhibition out in a 15-ft truck and picked us up from the airport and we headed directly to the Binghamton University Museum. That afternoon we oversaw everything get unpacked from the truck, including the circuit-backed tiles, and started to play with the layout for the towers of e-waste. The gallery space was beautiful, and everyone was excited to get started. After playing with the layout for a while, we headed back to our Airbnb. This trip really brought us together as a team; getting to spend extensive time with everyone built our friendships and in turn made the work more fun and of a higher quality. Everyone gained professional curatorial skills from the time spent in the gallery.

January 14th, 2022 – January 20th, 2022
The next morning, we started our day by visiting the campus’s greenhouses. The greenhouses were stunning, large, and full of plants. Working in collaboration with the gardener, Josh, we sourced plants for a piece in the exhibition, The Wall After Us, from the greenhouses. After the greenhouse visit, we headed back to the gallery to begin our work for the next few days. The routine became this: leave the house around 9 A.M., head to campus, and then spend the day in the gallery working until around 5 P.M. The days in the gallery were spent working collaboratively, laughing, and listening to music to get the exhibition done. Now, I’d be lying if I said there weren’t any challenges. I would compare having seven artists in a gallery to having seven cooks in the kitchen. But really, I was impressed by how we dealt with differences in opinion, and overall, how we were able to work as a team. I think I was especially impressed because it was our first time working as a team for many days consecutively and with how well we were able to keep morale up. We got experience with power tools and construction equipment. We learned that precision is important when it comes to an exhibition.

Another large part of the exhibition was the site-specific commission circuit-backed tiles. It was freezing when the team installed them, it was less than 10 degrees out. There was snow on the ground, a lot of it. The layout for the tiles was put together by Meghan Berger. The team worked in their hats and gloves to move the tiles from the pallets into the layout. Laura Bogyay, Allie Getty, Garrett Kocourek, Mary Widener, and Megan Berger all worked together to get this done in one day.