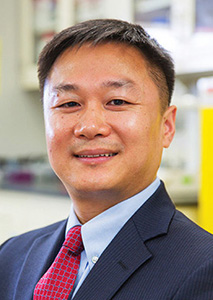 Dr. Junhong Chen is currently a Distinguished Professor of Mechanical Engineering and Materials Science and Engineering and Excellence in Engineering Faculty Fellow in Nanotechnology at the University of Wisconsin-Milwaukee (UWM). He is also the Director of NSF I/UCRC on Water Equipment & Policy and the founder of NanoAffix Science LLC. Dr. Chen received his B.E. degree (in Thermal Engineering) in 1995 from Tongji University, and his M.S. and Ph.D. degrees (both in Mechanical Engineering) in 2000 and 2002, respectively, from University of Minnesota. Prior to joining UWM in 2003, he was a postdoctoral scholar in Chemical Engineering at California Institute of Technology. He was promoted to Associate Professor and Professor in 2008 and 2011, respectively. His current research focuses on nanomaterial innovation for sustainable energy and environment. Dr. Chen has published 200 journal papers on various nanomaterials, sensors, and energy devices. His papers have been cited for over 7,300 times with an h-index of 49 and annual citation 2,200 times in 2016, including 1 hot paper, 27 highly cited paper, and 16 papers cited for over 100 times (ISI Web of Knowledge). Dr. Chen’s research has led to 6 issued patents, 6 pending patents, and 9 licensing agreements. He is a pioneer in technology commercialization through exemplary industrial partnership and the university start-up company. His research excellence was recognized by the 2008 Graduate School/UWM Foundation Research Award, the 2012 UWM College of Engineering & Applied Science Research Excellence Award, the 2014 UWM Research Foundation Senior Faculty Research Award, an elected Fellow of American Society of Mechanical Engineers (ASME) in 2013, the 2015 Inaugural Regent Scholar of UW System, the 2016 International Association of Advanced Materials (IAAM) Medal, and an elected Fellow of National Academy of Inventors in 2016. His start-up company NanoAffix is a recipient of the 2016 Wisconsin Innovation Award.