View All Updates
New to UWM?
Research Portal
He is recognized for using surface science to study catalysis under “real world” conditions. 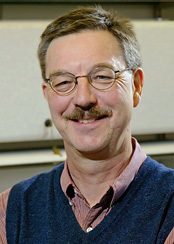 An estimated 10 to 30 percent of an automobile engine’s energy is spent overcoming the friction between its own moving parts. Much research has been focused on improving lubricants to lower friction and make engines more efficient.

But UWM Distinguished Professor of Chemistry Wilfred Tysoe has gained recognition in the study of friction, lubrication, and wear—tribology—by taking a more scientific approach and asking more fundamental questions.

“If we really understand how this chemistry occurs, and what sort of film is formed (on the engine parts),” he explains, “we can reverse the development process so that, if we would like to have a film with some particular properties, we can identify the films that have these properties, and then target the chemistry to provide that film.

“The idea is to get a fundamental understanding that ultimately will help people who make and design lubricants to do so in a much more rational fashion.”

Tribology is just one facet of Tysoe’s highly regarded research program, which focuses on understanding chemical reactions occurring at surfaces—the interface between a solid and a gas or liquid.

Another major focus for Tysoe is catalysis, where the rate of a chemical reaction is accelerated through the presence of another substance—in this case, a particular surface. A recent area of interest for Tysoe is the catalytic chemistry of gold-palladium alloys.

Experiments into chemical reactions on surfaces are often conducted in a vacuum to help ensure a clean surface—Tysoe himself has established a world-class laboratory that uses ultrahigh vacuum techniques for studying surface properties—but Tysoe is recognized as one of the few who has succeeded in performing such work under “real-world,” or high-pressure conditions.

Tysoe’s most recent area of research is nanoelectronics, where he is working toward fundamental understanding of electron conduction at the nanoscale level (billionths of meters) by studying electronic properties of molecular wires.

Tysoe’s tribology work led him to co-found the journal Tribology Letters in 1995, which has become a leading journal in the field.

At UWM since 1984, Tysoe has published almost 200 papers, made over 220 presentations, and attracted $4.5 million in extramural funding from such federal agencies as the National Science Foundation and Departments of Defense and Energy.