View All Updates
New to UWM?
Research Portal
His profound impact on cast metal matrix composites is evident in over 400 papers and presentations and 20 patents. 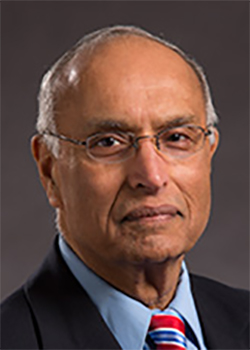 In March 2006, dozens of researchers from around the world gathered in San Antonio to celebrate the career of Pradeep Rohatgi, UWM Distinguished Professor of materials. Career paths of many attendees of the Rohatgi Honorary Symposium were guided by Rohatgi’s breakthroughs in metal matrix composites (MMCs). The event, organized by the Minerals, Metals and Materials Society, featured six sessions and more than 30 presentations.

MMCs consist of two materials: a metal and a reinforcing non-metal, such as a ceramic or organic compound, which provides added strength to the metal. Unlike alloys, which are homogeneous mixtures of elements, an MMC’s components retain their individual properties.

Making traditional MMCs—normally fibers embedded in a metal matrix—is a difficult technique whose high cost has limited the composites’ use, Rohatgi says. But in 1965—a year after receiving his Ph.D. in metallurgy from MIT—Rohatgi became the first to incorporate particles into the matrix, using simple foundry techniques. The resulting composites are strong and lightweight, and cost much less to produce.

His 1965 achievement was cited by the American Foundry Society as a landmark in the history of metal casting.

At least a thousand researchers worldwide have worked on particulate MMCs, Rohatgi estimates. “And in the next few years, I believe the industry will grow even more rapidly because of the energy crisis and global warming.”

One of his MMCs combines aluminum with graphite particles, and yields a self-lubricating material, providing great potential for next-generation engines. Another unites silicon carbide to aluminum, yielding a lightweight composite with the strength of iron-based materials.

Rohatgi is now developing composites embedded with nanoparticles that can deliver qualities such as self-lubrication, abrasion-resistance and energy-absorbing capabilities. He is also creating a robust “metallic syntactic foam.”

Much of Rohatgi’s work originated in his home country of India. Before coming to UWM in 1986, he established two national research laboratories there and was a professor at the Indian Institute of Science.

It was in India that he began work on natural fiber composites. Seeing that much of the developing world lacked sufficient energy and access to high-tech materials, Rohatgi explored incorporating coconut, banana, and sisal plant fibers into polymer composites. “So instead of using mined or synthetically made materials that cost a lot of money, I directed my work to renewable resources.”

After over 45 years of research in composite materials, Rohatgi has no plans to retire.

“I don’t consider research work as long as people don’t interfere with it and don’t harass me for doing it,” he says. “I intend to continue as long as my body allows and my research is supported and, more than anything else, as long as students want to learn from what I am doing.”