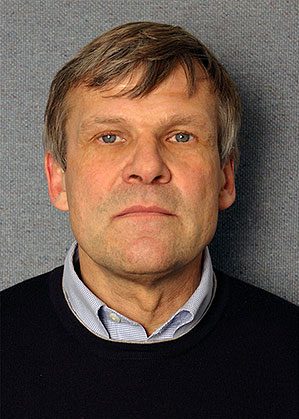 When things are really small, the laws of physics are different. Electrons surrounding the nucleus of an atom behave nothing like planets orbiting their sun. Indeed, the negatively charged so-called particles are not even particles in the classical sense, displaying many wavelike properties and surrounding the nucleus more like a planet’s atmosphere than its satellites.

Advances in the understanding of quantum mechanics has led to the shrinking of hi-tech devices and the expanding of computer hard drives.

Weinert’s basic research has helped lay the groundwork for these commercial applications. “They were really coming out of the study of what’s happening on the atomic level—the electronic magnetic properties,” the theoretical physicist and UWM Distinguished Professor says. “And to do that you need to know the quantum mechanics. Those are the kinds of problems I’ve worked on—magnetics, surfaces, interfaces.”

Weinert focuses on electronic structure theory, which describes the motions of electrons. “It’s a very complicated set of equations,” says Weinert, who has assembled a cluster of computers to handle high-volume calculations. “You basically need supercomputers. You have to go to some numerical work. Once you have that information, you can ask questions that are hard to get at experimentally.”

As a theorist, Weinert does not conduct experiments. Rather, he analyzes and extrapolates the findings of experimentalists. While cooperation between the two is essential, Weinert has been recognized for his level of collaboration.

“Weinert does something that few theorists do,” says Paul Lyman, associate professor of physics at UWM. “He consistently takes the extra effort to collaborate with experimentalists to help explain their observations, on a case-by-case basis. He thereby adds great value to an experiment, by helping to uncover the physics underlying the data.”

“I look at a lot of this as puzzles,” Weinert says. “If we change this or if we do that, what would happen? Is it some new phenomenon that would be interesting, cute, fun—something that’s different?”

After almost 20 years at Brookhaven National Laboratory, a U.S. Department of Energy research facility in Upton, New York, Weinert was attracted to UWM in 2001 by the Laboratory for Surface Studies, a collaborative research center where the structure and properties of solid surfaces and the interaction of surfaces with atoms and molecules are explored.

“Here people talk to each other,” he says. “That’s what makes it fun.”