Skip to content Skip to footer
As part of UWM’s long-term strategic planning, several UWM schools and colleges are being realigned. The process is underway and will be effective July 1, 2023.
Learn more about how the realignment will impact the College of Nursing.
View All 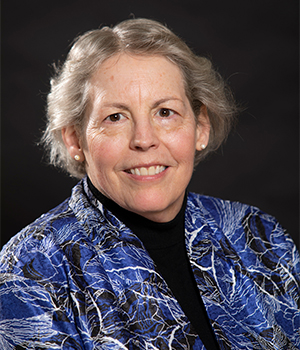 Teresa S. Johnson is a Professor in the College of Nursing at the University of Wisconsin-Milwaukee. She received her Bachelor of Science from Washburn University in Topeka, Kansas, Masters in Nursing degree from University of Kansas, and a doctoral degree from University of Illinois at Chicago. She has many years of clinical, teaching, and research experience with newborns and their families. Her research with newborns has centered on infant health measures such as infant size at birth as a reflection of fetal growth, care and study of the breastfeeding mother-infant dyad in in- and outpatient settings, and barriers to initiation and continuation of breastfeeding, especially among high-risk populations. She is also leading a team to study infant mortality in a small urban community in SE Wisconsin. She looks for opportunities to include undergraduate and graduate students in her research. She practices as a Clinical Nurse Specialist and nurse/research consultant for Wheaton-Franciscan Healthcare in Racine. She has several publications in both nursing and interdisciplinary journals.

Dr. Johnson has been actively involved with the March of Dimes and Wisconsin Association for Perinatal Care, AWHONN (Association of Women’s Health, Obstetric, and Neonatal Nursing) organizations that focus on programs and research that support healthy pregnancies, healthy babies, and healthy families. She was on an AWHONN team that developed Evidence Based Guidelines for Breastfeeding support: preconception through the first year of life. She is also working with a team in WI that is studying evidence based protocols that can potentially be used to decrease the racial disparities in birth outcomes in the state of WI.

Dr. Johnson continues to provide many different opportunities for both undergraduate and graduate students to participate in her research.

2020 Journal of Obstetric, Gynecologic & Neonatal Nursing Reviewer of the Year

The DAISY Award for Extraordinary Faculty (2018, May). The DAISY Foundation.

Practice Award (2003, May) College of Nursing, University of WI-Milwaukee

New Investigator Award (2002, May) College of Nursing, University of WI-Milwaukee

Abuhammad, S., and Johnson, T. “Potential impact of breastfeeding and maternal sensitivity during the first year of life: An integrative review of the literature.” International Journal of Pediatrics 6.12 (2018): 8655-8667.