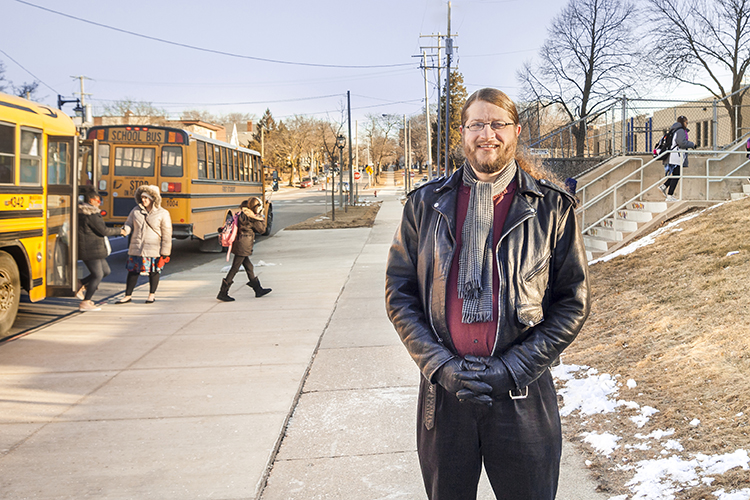 A newer city like Las Vegas may have an easier time combatting segregation than an older one like Milwaukee, says Marcus Britton, an associate professor of sociology at UWM. "Being a city of neighborhoods is appealing, but it may also be one of the factors that helps to perpetuate residential segregation and the inequalities that go along with that," he said. (UWM Photo/Elora Hennessey)

Marcus Britton is a child of the ’80s. By day, he played in the woods and fields of his hometown, Escanaba, Michigan. By night, he joined the first wave of American kids dabbling in computer programming. A love for computers and a fascination with community and the forms it can take – rural, suburban, urban – are represented in his current work as a researcher and an associate professor of sociology at UW-Milwaukee.

After a decade studying large metropolitan areas across the U.S., Britton is now focusing more on Milwaukee. He recently shared what his research can tell us about UWM’s hometown.

Do you study neighborhoods, or do you study the people who live in them?
Most of my research has something to do with neighborhoods, but I most often describe my research as being about race, housing and what I call “place-based inequality” – the idea that if you grow up in ZIP code 53206 as opposed to an affluent neighborhood in Whitefish Bay, that has consequences for the kinds of outcomes you typically experience later on.

What are the kinds of outcomes that you study when you look at a neighborhood and the experiences of its residents?
I look at birth rates of very pre-term infants, born at 28 to 32 weeks. Very pre-term births account for a significant portion of infant mortality, particularly among black and Latina women.

You’ve also studied education outcomes – literally how much education a child obtains over her lifetime. What patterns have you identified?
There is lots of evidence that growing up in a predominantly black neighborhood, which typically means a high level of concentrated poverty, is not merely associated with a lower level of education.

Some of my work has shown that even moving to a new, more affluent neighborhood often leads to a lower level of education for young black men, even if that’s the kind of move that we’d like to think leads to better educational outcomes.

One thing this may point to is that it’s important to make various kinds of investments in poor neighborhoods, and that the educational outcomes are different when you’re moving at a very young age versus moving as a teenager.

Are you saying that segregation creates poverty or poverty creates segregation?
Segregation creates poverty to the extent that we have two relatively disadvantaged racial and ethnic groups in the United States, African-Americans and Latinos. Not only do these groups experience relatively high poverty rates — in Milwaukee around one-third of African-American people are living under the poverty line, which is about three times higher than poverty rates of the American population as a whole — but they also experience segregation on top of that.

Segregation concentrates groups that have relatively high poverty rates into a subset of neighborhoods that then have all the problems that go with very high poverty: high rates of violent crime, poor health outcomes, etc.

Segregation can also, arguably, create poverty in the sense that it becomes harder for people to find jobs because many of the jobs they need to lift themselves out of poverty are located in suburban, predominantly white areas, as is the case in Milwaukee.

What is done with the knowledge and insight you’ve accumulated doing this kind of quantitative sociological research?
The kind of work I do can provide some insight into policy responses or even responses on the part of the nonprofit sector or business interests. For example, the fact that we see fairly strong associations between segregation at the metropolitan level and poor outcomes for individual black and Mexican children may point to a solution like making medical services more available in their neighborhoods. Doing things like increasing Medicaid funding is not going to help if there aren’t good prenatal care services in the neighborhoods where pregnant women live.

What are some other new directions you would like your research to take?
A comparative analysis of neighborhood change and its consequences in Milwaukee and Las Vegas. The general trend in black/white segregation, which is the most extreme form of residential segregation – feeding into school segregation and other forms of segregation – is for areas to become less segregated. This has been an encouraging development that began in the 1970s, but it’s been happening to an uneven extent across metropolitan areas.

Why are other cities desegregating while Milwaukee’s segregation and poverty rates persist at such high levels?
Cities have very different histories. Cities like Las Vegas that have more recent housing developments tend to be less segregated because they don’t have the same history and, I think it’s fair to say, animosity that you can see in Milwaukee. This makes it easier to do stuff and use the housing marketing as an integrating mechanism, which is a tall order in a place like Milwaukee where there are very clear and long-established histories at least since the 1980s that have locked in some of those inequalities. Being a city of neighborhoods is appealing, but it may also be one of the factors that helps to perpetuate residential segregation and the inequalities that go along with that.