On Saturday, the UWM women’s soccer team won the Horizon League Championship Tournament and qualified for its second consecutive trip to the NCAA tournament. On Monday, the team found out its opponent: in-state rival Wisconsin.

The teams will square off at 5 p.m. Friday at the McClimon Soccer Complex in Madison.

Wisconsin, ranked No. 11 in the country, earned an at-large bid to the tournament after being upset by Purdue in the first round of the Big 10 tournament.

“It’s a good feeling,” UWM head coach Troy Fabiano said. “You look at the body of work of the ladies from the get-go and this was one of our goals. Just to be picked here and to follow up last year with this. It’s an amazing group of players – they deserve it. They work extremely hard, and when you have a target on your back and deliver like they did for the entire season, it’s amazing to me.”

In Saturday’s match, Rachel Phillpotts scored an early goal and Haley Johnson added an insurance strike in the second half to secure the 2-0 victory.

Phillpotts’ goal snapped the scoreless streak of UIC goalie Lena Kurz, the Horizon League Goalkeeper of the Year, at 343 straight minutes. She collected a ball off a corner kick scramble and blasted it to the far post to put UWM ahead just 8:53 into the match.

“Sometimes in a game like this pressure can build up,” Fabiano said. “But we got the goal. One of the things we preached this year was finding a second goal. In the past, those have been 1-0 games, but we found a second goal to put less pressure on us. They believe in themselves and have done it for 19 games this year.”

In net, UWM’s Elaina LaMacchia was credited with six saves to claim her ninth shutout of the season, and she saved the best for last. LaMacchia timed Tamae Douglas’ free kick effort perfectly, pushing the potential goal up and off the cross bar in the 81st minute. 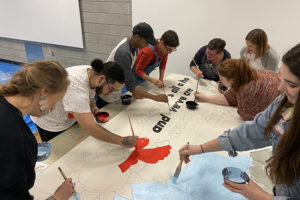