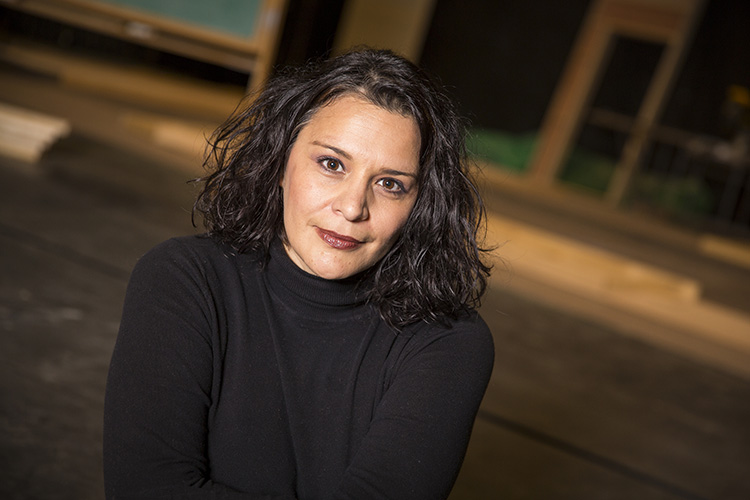 Voice teacher Michelle Lopez-Rios empowers Latino immigrants, women and others to tell their own stories. She will be recognized for her efforts Friday with an Outstanding Woman of Color in Education Award from the UW System. (UWM Photo/Derek Rickert)

Michelle Lopez-Rios has devoted her career to helping people and communities find their voice. Perhaps that’s not surprising, considering what’s been silenced.

Born of native Spanish-speakers from the border town of Brownsville, Texas, Lopez-Rios says her parents were from a generation “beaten for speaking Spanish.”

“Assimilation was really important,” she says. Her parents moved Lopez-Rios and her brother to The Woodlands, a Houston suburb with good schools but few children who looked like them or shared their Mexican-American culture.

After high school, Lopez-Rios enrolled in the University of Southern California, where she found other Mexican-American students and, finally, a sense of belonging. Arriving on campus, she remembers thinking, “Wow, there are people like me and they’re talking in Spanglish!”

USC also offered Lopez-Rios her first exposure to Latino theater — as well as a curriculum full of white male playwrights and actors. “I didn’t get to see my face on stage,” she says.

Now a voice professor in UWM’s Peck School of the Arts, Lopez-Rios has made it her mission to help people raise their voices — on stage and off. She will be recognized for her efforts Friday with an Outstanding Woman of Color in Education Award from the UW System. The award is an annual honor given to faculty, staff, students, or community members for their contributions to diversity and the status of women within the UW System.

Lopez-Rios’s contribution to diversity at UWM and beyond is impressive. When she arrived in Milwaukee in 2006 with her husband, Alvaro Saar Rios, also a member of the Peck theater faculty, she set out to uncover the stories of Latinos in her new hometown. The couple’s grant-funded project, “Nuestra Voz, Nuestra Historia/Our Voice, Our Story,” engaged people who were not professional actors or storytellers in a workshop designed to help them reclaim stories from their own lives. When the pair couldn’t find enough participants on campus, they recruited in Latino neighborhoods, schools and community centers.

“Our work is based in the idea that, if it’s not there, we go to it. No more excuses,” Lopez-Rios says.

Assembling the workshop members turned out to be the easy part. The bigger challenge was cajoling them onto the stage.

Rios says the storytellers were nervous, wondering, “‘Will people think my story is funny?’ or, ‘Will they care?’ Michelle took away all that anxiety.”

“Being involved in [Nuestra Voz] had such a strong effect on me that I became a theater student,” Sotelo Muñoz says. “I was also inspired by storytelling, performance and how theater can bring a voice to those who are often underrepresented in society.”

Turning up the volume

Underrepresented voices are what drive Lopez-Rios. As a voice teacher, she helps actors master Shakespearean English and coaches ministers, educators, and lawyers in effective communication. But it’s the opportunity to work with the unheard that stirs her most deeply.

“The work that’s really exciting to me is people who have lost their voice,” she says. “Abused women, immigrants who don’t have status. I help them find the strength of their voice and help them express themselves so they can be a part of whatever they want to in the community.”

In these cases, a voice has both literal and metaphorical meaning. “Their voice becomes so quiet and introverted that, physically, there is no sound,” Lopez-Rios says, “They feel invisible so they sound invisible.”

Angie Trudell Vasquez can attest to Lopez-Rios’s talent for helping people turn up the volume. A Milwaukee-based poet and activist, Vasquez says Lopez-Rios transformed her sense of herself as a performer.

“In one session with her, she changed how I read or perform my poems in public,” Vasquez says. “I was reborn by the experience as an artist. She taught me that delivery is an art in and of itself.”

The transformation was obvious to her teacher, too. “When I met Angela Vasquez, she didn’t have a lot of power in her voice,” Lopez-Rios says. “We worked on her power and it set her poetry on fire in a different way.”

That scarcity makes Lopez-Rios’ presence on campus vital for students like Sotelo Muñoz.

“When I first started theater in UWM, I felt like I didn’t fit in,” Sotelo Muñoz says. “Having Michelle as a professor served as a role model for me and an example of what I could accomplish.”

Lopez-Rios has contributed to the diversity of academic offerings at UWM, too. She designed Theatre 324: Theatre in the Americas, to give students the “opportunity to intimately study the intersection of history and theater in Latin America, Caribbean, and Latina/o culture.”

The course highlights the voices of Latinos, both past and present. Lopez-Rios might use a script to bring to life the legacy of Mexican farmworker strikes in California or the stories of the “disappeared” — victims of Argentina’s violent dictatorship. Studying these plays opens windows into the complex saga of the Americas. “The students say, ‘I can’t believe I didn’t know this history!’” she notes.

Lopez-Rios strives to bring Latino theater alive in other ways as well, including as a writer, an actor, and a director.

“All the roles feed into each other,” she says. “There’s this wonderful term in Spanish. It’s ‘teatrista,’ and I love that because it’s ‘a theater worker.’ It’s not a role — actor, director — it’s a ‘theater creator.’”

She wrote her first play last year, “500 Years,” about a 500-year-old Latina reflecting on her life and the people she met in places connected by the Conquest: Spain, Mexico, Milwaukee. “It was so terrifying, and so hard, but it made me appreciate the words in a whole new way as an actor.”

For all of Lopez-Rios’s efforts to raise the voices of Latino writers, of Latina performers, of everyday people who need to be heard, it’s clear that her real superpower is an ability to listen closely, with both head and heart.

“It’s definitely part of her nature,” Rios, her husband, says. “I think she is the person that people go to when it comes to certain problems. She is the one who listens. My office is right next to hers. She always has students coming to her office hours, with life problems, questions about staying in the program. She is the ear of the department.”