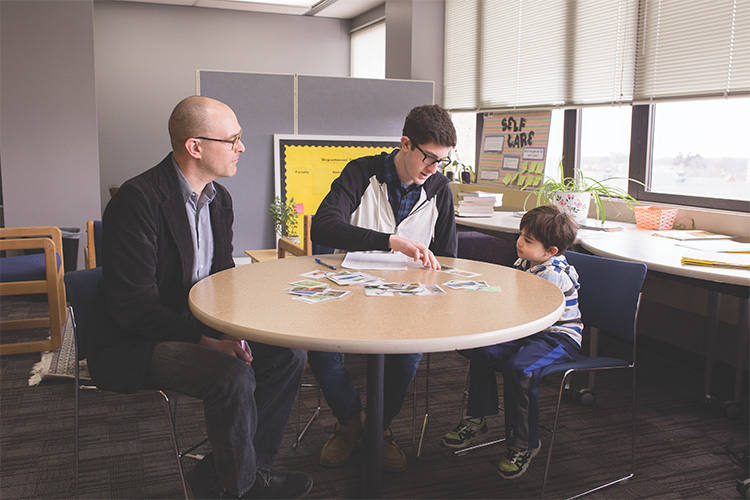 Noah Wolfe has been conducting research on learning in Associate Professor Chris Lawson’s lab on cognitive development in the Department of Educational Psychology. (UWM Photo/Alexis Amenson)

If anybody were destined to be a UWM student, it was Noah Wolfe: His grandmother, Cheryl Kader, was a faculty member. His parents met and fell in love at the campus Hillel Jewish organization. His mom got her bachelor’s in education from UWM. His brother goes to UWM.  His sister is arriving next fall. And he was born at the former Columbia St. Mary’s Hospital, now UWM’s Northwest Quadrant.

“UWM runs in my family.  Literally my whole life has been wrapped around UWM,” Wolfe said.

Wolfe, now a junior in exceptional education, grew up in Shorewood, just down the road from the campus, and took classes on campus when he was in high school. He looked at a few other schools when it was time to head off to college, but UWM was just the perfect fit for him, he said.

Finding out he would be able to do research as an undergraduate clinched the deal.

‘I literally fell in love with the work’

The summer before his first year, he initially applied to a lab that focused on autism, but it was full. So he talked to Kyla Esguerra at the Office of Undergraduate Research, who suggested Associate Professor Chris Lawson’s lab on cognitive development in the Department of Educational Psychology.

“So I met with him,” says Wolfe. “He’s very outgoing and really cool. He shot me an email that said we’d love to have you in the lab. I literally fell in love with the work. I found it very interesting, so here I am.”

Wolfe co-wrote an abstract with Lawson and another student, and has already presented a poster at the Midwestern Psychological Association conference in Chicago. He has also presented  as well at undergraduate research symposiums at UWM and other UW System campuses.

“I can’t say enough good things about him,” says Wolfe of his mentor. “We actually just launched an experiment that I’ve been working on since August, learning how to use websites and code and all that. Results have already started feeding in. I’ve been emailing back and forth with Dr. Lawson, and I called my dad. I was so happy.”

How the research is done

The new website allows him to connect with online participants called “workers,” who are paid a small stipend (about 25 cents) for completing  surveys. The survey was created through Qualtrics, an online website that allows people to create surveys and create data from them. Then the researchers used the Amazon Mechanical Turk  (MTurk for short) website that helps crowdsource “workers” to take the survey.

The research is similar to what he and Lawson have been doing with children, looking at how they learn information in one context and then apply that knowledge to new questions in a different context.

With children, the researchers generally use flash cards, but with undergraduates the research can be done with surveys. “When we test undergraduates, it takes a month to get 40 responses because you have to schedule it, and somebody has to be in the lab, so that’s why this (new website) is really useful technology.”

When he’s not studying or researching, Wolfe co-manages Stone Creek Coffee on Downer Avenue. “I like being busy. I always tell people that if have time to procrastinate I will.”

Wolfe, with Lawson’s encouragement, has added a minor in psychology to his studies as a result of his research, and is excited about eventually going on for a doctorate in educational psychology.

“I may try teaching or school administration first, but I’ve decided this is what I want to do,” Wolfe said. “I want to go on and eventually get a PhD in educational psychology. It’s been amazing to say the least.”