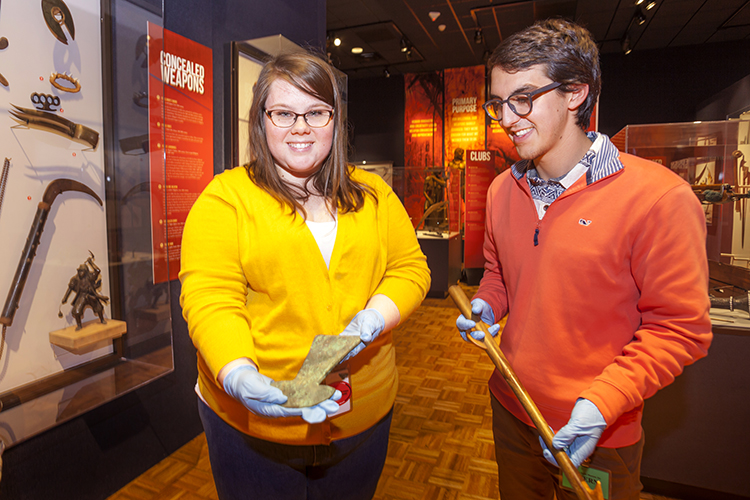 Anthropology graduate student Lauren Kiesewetter and anthropology major Armando Manresa examine two weapons that were not included in the Milwaukee Public Museum’s “Weapons: Beyond the Blade” exhibit. The museum interns are tasked with showing the extra weapons to visitors in the exhibit. (UWM Photo/Elora Hennessey)

Anthropology graduate student Lauren Kiesewetter’s nametag has a big red sticker that reads: “Ask me about my favorite weapon!”

Currently – her favorite changes every week, she jokes – it’s a piece of Indonesian armor crafted from parrotfish scales.

“The human ingenuity that went into that, and the time and artistry, is amazing,” she said.

The same can be said for almost every item filling the cases in the Milwaukee Public Museum’s “Weapons: Beyond the Blade” exhibit. Opened in October, the display features 188 artifacts from 50 countries that explore the history, purpose and cultural significance behind all kinds of weaponry.

“Weapons are some of the most provocative items that have shaped history,” said Dawn Scher Thomae, the curator of collections at the Milwaukee Public Museum as well as the co-coordinator of the UWM museum studies graduate certificate.

“Weapons: Beyond the Blade” is the brainchild of Scher Thomae, herself a graduate of UWM’s master’s degree program in anthropology, but it was born with a lot of help, much of it from an army of interns that included dozens of UWM undergraduate and graduate students. An entire class from the museum studies graduate certificate cohort even worked on the exhibit as part of their coursework.

Putting everything together was quite an undertaking. For almost two years, Scher Thomae and her team considered more than 3,000 artifacts for display. They researched in detail the backgrounds of each weapon that made it through the five rounds of elimination to be included in the final display.

The students “did a great amount of object research,” Scher Thomae said. “We discussed it and I pushed them to ask, ‘What was going on at the time that humans needed these weapons? What was it made of? Who donated it to the museum?’ They also worked with me on exhibit evaluations and to develop public programs. Everyone who interns with me does real work that has measurable outcomes.”

Kiesewetter, for instance, was part of a team that contributed to a section in the exhibit that challenges visitors to think about weapons in popular culture. From the Olympics (sports include shooting, archery and fencing) to playing cards (the king of diamonds wields an ax and the other three kings carry swords), weaponry is ubiquitous.

Kiesewetter helped to compile the research and distill it into panels that quiz viewers about how and why weapons appear in everything from literature to advertising. As she hopes to work in a museum after she graduates, the experience has been invaluable.

“Just getting your foot in the door here (at the Milwaukee Public Museum) is a way to open up your opportunities,” Kiesewetter said.

The first display inside “Weapons: Beyond the Blade” is an actual blade – a Chinese dao. Beside the sword is a label asking viewers how they think about weapons. Is a sword just a tool of violence, or could it have deeper meanings as a piece of art or a status symbol?

Further inside, weapons of all sorts, from Argentinian bolas to a European suit of armor, are on display. The descriptions of each item are listed on signs just outside of the cases so that nothing distracts from the weapons themselves. These were specifically created to harm others, and Scher Thomae doesn’t shy away from headings like “Blunt Force Trauma” to describe a wahaika from New Zealand used in hand-to-hand fighting.

“When I first walked through the exhibit, I was shocked at the size of it all,” admitted Armando Manresa, a UWM anthropology major and another of Scher Thomae’s interns.

Like Kiesewetter, Manresa’s internship includes interpreting select weapons for the public. Periodically he will take a few items that did not make the cut and show them to visitors, like a Ngala execution sword from the Congo or obsidian flakes used in a macuahuitl, a fierce Aztec club.

“The majority of these [weapons] are all from the Milwaukee Public Museum collection,” said Manresa. “It’s incredible seeing the pieces that didn’t make it into the exhibit.”

“Weapons: Beyond the Blade” has received an overwhelmingly positive response from the public, according to Scher Thomae. She’s gratified that the display has inspired people to look at weapons in a new light. Conversations about modern-day violence have a historical context, she stresses.

“[Weapons] are an important topic now as they were in the past. The exhibit does not sensationalize violence but offers an opportunity to explore how weapons evolved all over the world. It’s something that few people talk about.”

“Weapons: Beyond the Blade” runs through Jan. 1.

‘Beyond the Blade’ chock-full of UWM connections

A slew of UWM students and graduates helped put together the Milwaukee Public Museum’s “Weapons: Beyond the Blade” exhibit. They include:

Museum staff who are UWM alumni