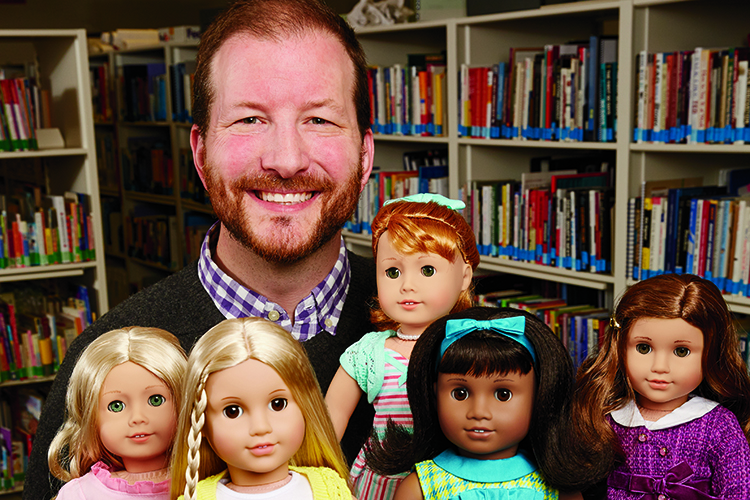 The newest American Girl historical doll is named Melody Ellison, an African-American girl growing up in 1960s Detroit amid the civil rights movement. Her backstory has its roots in a UWM public history class.

“Urban history was a topic I wasn’t familiar with, and it was some of the earliest reading from (UWM history professor Amanda Seligman’s) coursework that … informed the beginning of this character,” said Mark Speltz, a 2009 graduate with a master’s in public history.

Speltz is a senior historian at the American Girl company, which publishes fictional stories of young girls set in significant time periods in U.S. history. Speltz leads a research team responsible for crafting the historical details of each character’s story, from the food she eats to the clothes she wears. American Girl dolls are paired with books that help depict an era.

Melody was his latest project, which dovetailed nicely with his personal research, civil rights era photography.

“I’ve been focusing on the 20th century and the civil rights era now for the past 10 years, and I have a photography book coming out this fall from the Getty Museum in Los Angeles. The main focus is the movement beyond the South – places like Cleveland, Milwaukee, New York, Los Angeles, places we don’t think about when we hear ‘civil rights,’” Speltz said.

Speltz’s background knowledge may have started in UWM’s classrooms – he took one course a semester for five years to complete his degree – but his work for American Girl takes him all over the United States. Once a character’s setting and time period are decided, the historians research the era in detail.

To learn more about 1960s Detroit, Speltz organized tours at the Motown Museum, the Henry Ford Museum and the Charles H. Wright Museum of African American History in Detroit. He and his team talked with the Detroit Historical Society and visited neighborhoods and schools. An advisory panel included members who were experts on the time period, had grown up in Detroit or participated in the June 1963 Walk to Freedom alongside Martin Luther King Jr.

The author chosen to pen the new character’s series was along for the ride, and Speltz and a project editor were on hand to help the writer flesh out descriptions and background.

At the same time, the doll was being designed. Authenticity is very important to American Girl’s success, Speltz said.

“At our board meetings, we’d show some of our early ideas and concepts and people would critique them,” Speltz said. “There were a lot of great ideas that come out of those meetings. We work through anything that can be challenging on projects like this, such as skin color, background on the characters, hair texture and length, all of those design things.”

It takes two to three years for an idea for a character to grow from a concept to book series and doll. Melody’s series of books was completed in January, and the doll will be released in late summer or autumn. She is the seventh character that Speltz has worked on.

He’s been surprised at the amount of publicity Melody has received. That could be because her setting and time period are so compelling. The civil rights movement outside of the South is largely ignored in school curriculums.

“Many, many roots of problems in Milwaukee and Chicago and many urban, northern and western cities are related to race,” Speltz said. “It’s decades upon decades of people doing the same things: protesting at schools, sitting in on lunch counters, demonstrating outside of stores so they could be hired – many of the exact same southern things were taking place in northern communities.”