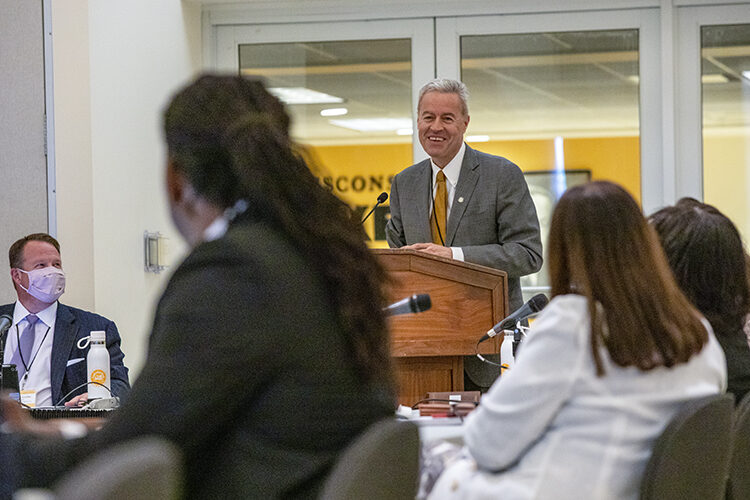 UWM Chancellor Mark Mone addresses the UW System Board of Regents during their meeting in Milwaukee at the Student Union on Thursday, June 3. (UWM Photo/Troye Fox)

The University of Wisconsin-Milwaukee is unique among UW System institutions as a top-tier research university with an access mission.

That was the focus of UWM Chancellor Mark Mone’s presentation to the Board of Regents Thursday, June 3, at the group’s meeting in Milwaukee.

The university is ranked as an R1 Carnegie research institution, and is also one of fewer than 400 included in the Carnegie Classification on Community Engagement.

UWM is the most diverse campus in the state on several dimensions. In addition to 6,025 underrepresented students, the university educates more veterans than any other institution of higher education in the state, and is recognized as an LGBTQ-friendly campus.

Mone shared other special qualities of the university with the regents, including the facts that UWM:

“These examples represent only a fraction of UWM’s special and unique offerings,” the chancellor added.

Key issues for the city are its racial, economic and health disparities.  A national “well-being” index put Milwaukee at or near the bottom for African Americans and Hispanic residents. The Metropolitan Milwaukee Association of Commerce ranked the city as having the largest prosperity gap out of 21 major cities between white and Hispanic/Black residents.

While graduation rates have improved in the city, education disparities continue to affect equity and the economy. Milwaukee is 50th out of 50 in the gap between Black/white high school graduation rates and 43rd out of 50 in the gap between Hispanic and white grads. Milwaukee has the third highest rate of Black incarceration in the state — 10 times that of whites — one of the highest infant mortality rates and the second lowest rate of Black homeownership.

“What (UWM professor emeritus and researcher) Marc Levine and others have shown is that if you’re born poor and black in Milwaukee, when you get to your adult early earning years you’re at 80% of your white counterparts,” said Mone.

Changing these dismal education  statistics is important to the entire state because improving the lives of all people can change the economic trajectory of not only the city, but the region and the state, Mone said.

“Put in the form of an analogy, a family is only as strong as its least strong member; you’re only as happy as the least happy family member. As goes Milwaukee, so goes the state; as goes UWM, so goes Milwaukee and the larger region.”

UWM is involved in efforts to address all these issues, but recognizes that many solutions need to involve partnerships with others. “Those challenges are more than any one institution can address,” said Mone.

Among the education partnerships  the university is involved in are M³ (UWM, MATC and MPS), HERA (Higher Education Regional Alliance), and the Moon Shot for Equity.

The university has joined with Marquette University, the Medical College of Wisconsin, Children’s Wisconsin, Froedtert, Ascension and Advocate in the Anchor Collaborative to diversify hiring and procurement in the city’s most vulnerable communities.

UWM is also partnering with business to develop innovative approaches and workforce development such as the Lubar Entrepreneurship Center, the Northwestern Mutual Data Science Institute, Tech Ed Frontiers, the Freshwater Collaborative and the Connected Systems Institute.

UWM is focused not only on the talent pipeline, but also the research and innovation needed to develop new businesses for the future and keep Wisconsin competitive globally. Mone noted that one study showed that the film industry in Wisconsin – involving many graduates from UWM’s film school –  now employs five times as many people as the brewing industry.

Alum Darian Dixon, who graduated in 2015 in Geosciences, now works on cameras on the Mars Perseverance rover. He is active in encouraging Black students to go into the STEM fields, and talked virtually to the regents about the difference UWM made in his life.

“I really don’t think I’d be where I am today without the education I received at UWM.”

Regents were positive about the chancellor’s message. Regent Kyle Weatherly, founder and CEO of Frontdesk, mentioned a number of his employees who were critical to the company’s success and ability to make it through the pandemic were UWM graduates. “If it weren’t for UWM, I don’t think my company would exist.”

Regent Hector Colón praised the university’s efforts to increase the number of Hispanic students, and become a Hispanic Serving Institution. “Milwaukee is the economic engine of the state.”

A moral imperative too

This isn’t just for individuals, he emphasized – greater equity benefits the state and communities with higher tax bases and stronger economic development. ”The data are incredibly compelling.”

Mone asked the regents for their support through advocacy and increased funding for UWM’s unique mission of research and access. “We are underfunded for the mission we are trying to accomplish. The more support we have, the more we can do.”