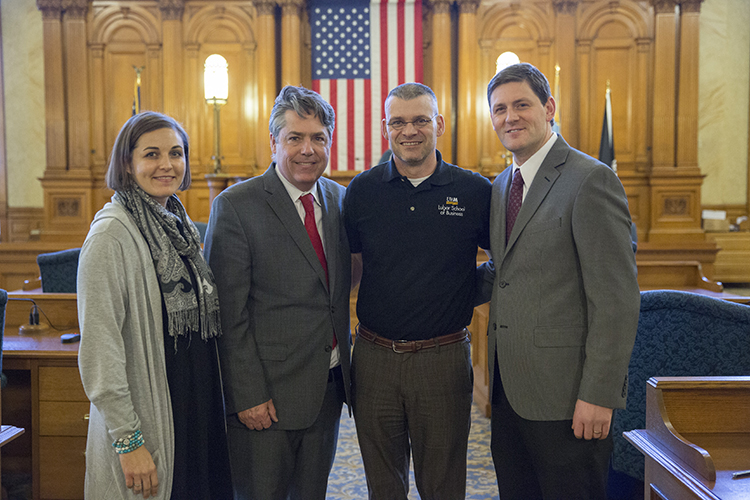 “It’s always exciting to take what you learn and apply it in the real world,” said Lochowicz, the project manager. “It reinforces what you learned and differentiates UWM’s EMBA program from others.”

The students found that cases of foodborne illnesses declined, and overall sanitation improved, in nearly all cities that used a food grading system. The new grading system, which took effect Jan. 2, uses the students’ algorithm and scores food establishments’ compliance with the Wisconsin Food Code. Violations that generate a higher risk of foodborne illness are given greater weight and result in higher deductions.

“I personally enjoyed taking all of the feedback received from all of the key stakeholders and using that to create an objective scoring tool that emphasized collaboration and partnership between the restaurant operators and health inspectors,” said Lochowicz.

The system will use A, B and C grades that correspond to overall compliance with the Food Code; a perfect score would be 100 points. A food establishment that earns an “A” grade, for example, would have a score of at least 80 points out of 100. Food establishments can also be temporarily closed if imminent health hazards are discovered upon inspection or if the score is too low to be considered safe.

The system also enables the possibility to earn points back based on timeliness of corrections, and places an importance on an establishment’s history of successful inspection. Both factors, coupled with the algorithm’s weighting method, are designed to provide an accurate, fair grade of an establishment, as opposed to a grade that reflects one moment in time.

“We found that the largest complaint from the food service industry was the single point in time inspection which, if it yielded a lower grade, could significantly affect business for a lengthy period of time,” said Deeken.

Placards that display that letter grade, or notice of temporary closure, will also be introduced as part of the new scoring system. Placement of such placards in clearly visible areas at establishments will be mandatory starting in 2019.

Claire Evers, director of consumer environmental health for the City of Milwaukee’s Health Department, said that working with food establishment operators was important to the process.

“We let operators become part of our test database to see what their grade in 2017 would have been,” she said. “A lot of them jumped on the opportunity. We didn’t want any surprises. We really wanted to make sure that (food establishment) operators understand that their Food Code requirements do not change, just that there will be placards displayed.”

The food grade system can lead to more positive outcomes for both food establishments and patrons alike. The students found that food establishments that consistently obtained a high grade saw business increase by five percent or more, based solely on the grade.

“The grading program can bring heightened awareness of the importance of sanitation in commercial food establishments and has been a win-win situation for all parties,” Deeken said. “Significant costs are also associated with the hospitalizations and lost work time due to food poisoning cases.”

The Health Department and Murphy had been pushing for a solution, like the one ultimately developed by the students, for several years.

“I travel quite a bit and see systems like this around the U.S. and around the world, really,” Murphy said. “Having the grade improves food safety in places where it is used correctly. We tried to model those grades in the right way for the unique food system we have in Milwaukee, really thinking about how to improve (food) safety.”

The Health Department would not have the resources to accomplish something like the algorithm so quickly, according to Murphy, if it weren’t for the students’ help developing the system.

“I’m incredibly grateful for them. Their algorithm is now at the core of Milwaukee’s food safety system moving forward,” Murphy said. “A lot of people don’t realize what a great treasure (UWM) is. They’re great.”

“The integrated management project is one of the very, very unique pieces to our executive MBA program. It’s really a live exam for 10 months,” Wickersham said. “There are two other EMBAs in Wisconsin, at UW-Madison and Marquette, and they don’t do this.”

UWM’s Executive MBA class is composed of senior business leaders from across Southeastern Wisconsin with years of management experience. Students in the executive MBA program come from multiple fields, including engineering, law, medicine and technology.

“We have an impressive group of people that are doing this, and those are the people that are going to act as consultants for anybody who puts in an application,” said Wickersham.

Applications undergo a minor vetting process to ensure that the project can be feasibly completed in a 10-month time frame.

Local nonprofits and business organizations that could benefit from working with a small team of Executive MBA students, for free, are welcome to contact Wickersham at afw3@uwm.edu for more information on how to become involved with the integrated management project.

“We work with a lot of nonprofits that tend to rise in the list because we know they don’t have the time or the money to be able to do this kind of stuff,” said Wickersham. “We’ve helped a lot of small businesses as well. Anybody who thinks they could use basically a year of free business consulting.”