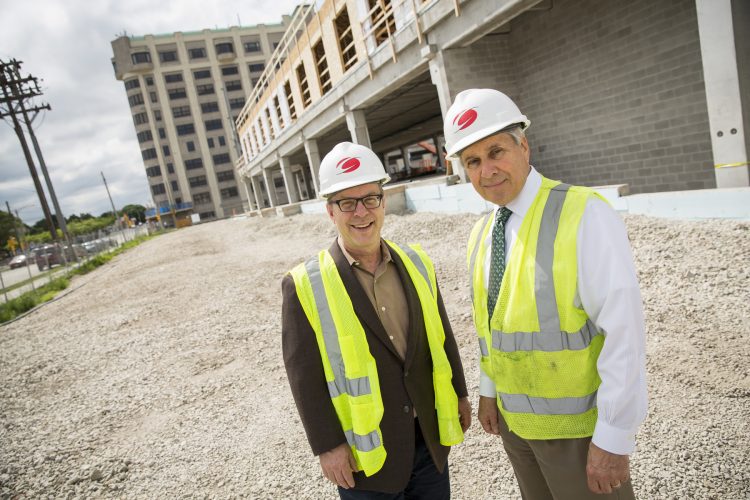 A fountain and green space at the Greenfield Avenue and First Street intersection will beautify the neighborhood while serving as an experiment in green infrastructure.

The project, to be completed in October, includes a 30,000-gallon, underground cistern and four reflecting pools flanked by planter boxes. In a technique called “forced wetland,” recirculating water will spill into the fountain after being forced up through the roots of the plants. Plant filtration removes many contaminants from polluted urban runoff, which often contains substances such as gasoline, fertilizers and harmful microbes from pet waste.

Called the Greenfield Avenue Gateway, the project is the first in a series of demonstration sites planned in the city’s harbor district to improve water quality in Milwaukee’s frail estuary and help keep storm water from overwhelming the sewers.

“It’s an ecological fountain for the 21st century, fed by rainwater,” said Jim Wasley, a UWM professor of architecture who designed the site. “This is the first time I’ve worked on a storm-water project that captures the water and recirculates it while also cleaning it.”

The fountain and public space sit between a new development with shopping and apartments, also under construction, and busy roads at the intersection. Storm water from the adjacent building’s rooftop will feed the fountain system.

Wasley hopes to raise funding that will allow the addition of three new water technologies, including one created by David Garman, UWM’s associate vice chancellor for water technology, research and development, and research associate Marcia Silva.

Their invention removes phosphorus from the water without the use of chlorine or other chemicals. This keeps algae from growing on the surfaces of the pools.

Garman and Silva propose adding a material called modified zeolite encased in a sort of “teabag” that will be suspended in the pools.

“It is doubly charged so it attracts elements like phosphorus, but also chemicals like ammonia,” Garman said. The patent-pending technology, developed through the Water Technology Accelerator at the School of Freshwater Sciences, has already been licensed to a Chinese company through the UWM Research Foundation.

Two other technologies that could be piloted at the fountain site include:

Contributors supporting the project include the City of Milwaukee, the Milwaukee Metropolitan Sewerage District and Wangard Partners, developers of the shopping center that hosts the fountain.