Imagine engines that conserve fuel by automatically dialing down internal friction, water pipes that seal their own cracks and iPhones that protect themselves when dropped. Metallurgist Pradeep Rohatgi has – and he invented the futuristic materials necessary to build these smart products.

For 40 years, Rohatgi has been steadily creating metal matrix composites, which combine standard metal alloys with completely different classes of material – ceramics, nanoparticles and even recycled waste – to give them “smart” qualities.

For all their potential, most of Rohatgi’s creations sat on the shelf for decades. But a flourishing entrepreneurial culture at UW-Milwaukee, the right partners and a national push for conservation and energy independence convinced him to make the leap into the commercial sphere. He’s doing so with a product line made using a self-lubricating composite, one he believes will cut friction in internal combustion engines significantly, saving gas while reducing emissions.

“The federal mandates to reduce carbon emissions and increase fuel efficiency could be the incentives that finally help these composites into the marketplace,” said engineering alumnus Chris Jordan, who worked in Rohatgi’s lab as an undergraduate. Jordan and lab mate Simon Beno have joined Rohatgi and two of his collaborators in a startup company, Intelligent Composites, which aims to get car parts made with the composite into commercial use.

If successful, the startup’s product line could reinvigorate Wisconsin foundries that have lost business to cheap labor overseas.

A career in composites

Rohatgi pioneered the development of metal matrix composites in the 1970s while working for the International Nickel Company’s U.S. lab. An official at General Motors suggested the lab develop a lightweight alternative to cast iron that would reduce the weight of vehicles and reduce the cost of shipping vehicles to showrooms.

But metal matrix composites were high-tech materials too complicated to mass-produce, and automakers balked at the cost, Rohatgi recalled. At the time, gas was cheap, so there was little motivation for them to pursue the research.

Rohatgi, however, persevered, believing the materials could improve lives and provide jobs.

“These composites can give old-line manufacturing the means to produce new, high-tech products that industries can’t find anywhere else,” he said.

Rohatgi and longtime collaborator David Weiss spent years testing composites with various smart qualities at Manitowoc’s Eck Industries, where Weiss is vice president of engineering. They resolved compatibility issues and devised a method to mass-produce composites in foundries, bringing down the cost.

Metal matrix composites have been the exclusive property of labs that custom-make them for use in projects like the Hubble spacecraft. Now, Eck will prove that same technology can be used to produce the engine part Intelligent Composites will sell.

“For years, Pradeep used to come to Eck, and we were trying to understand how we could scale up some of his inventions with the goal always of bringing them to the commercial market,” said Weiss, who is also acting CEO for Intelligent Composites. “What was missing was a business that could take the materials into production and sell them.” 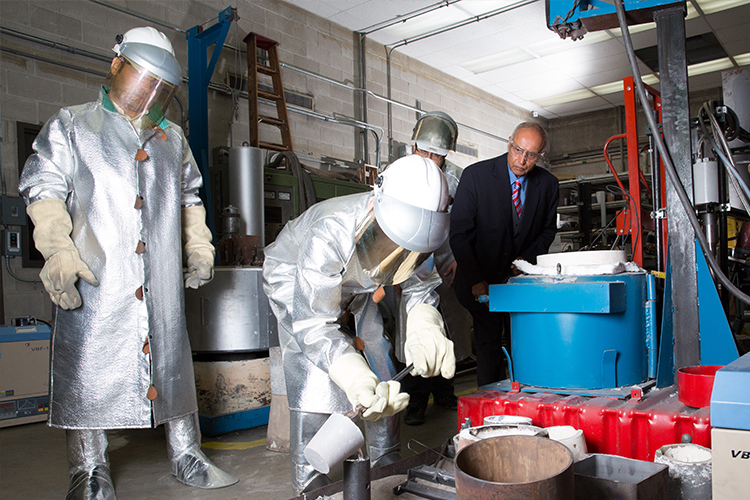 Jordan was already a successful Internet entrepreneur when he returned to college to finish his bachelor’s degree. He took a part-time job in Rohatgi’s lab in 2012, just as the professor decided to enter the self-lubricating composite in the Governor’s Business Plan competition.

“He said it was only an academic exercise when he asked me to get involved,” Jordan said. But within a week, Jordan was envisioning a profitable startup. He sought help from James Hunter, a Lubar School of Business entrepreneur-in-residence who signed on as the startup’s chief financial officer.

According to the team’s market research, engine and vehicle manufacturers facing stricter federal emissions regulations would sit up and take notice if presented with a cost-competitive method of reducing fuel consumption and emissions by 1 or 2 percent.

Prototypes of a rotary engine with a part made from self-lubricating composite have produced far better results. Independent testing reported a 35 percent reduction in fuel consumption compared to rotary engines made of traditional materials.

Jordan and Beno hope to see similar benefits when the composite reduces friction between pistons and cylinders in internal combustion engines. Piston engines are used in almost all cars and trucks, so the impact could be dramatic.

“If every car and truck in the country used Intelligent Composites cylinder liners, the United States could become energy independent,” Beno said.

His claim is supported by years of testing Rohatgi and Weiss did with manufacturing giants Ford, Briggs & Stratton and Oshkosh Corp. before Intelligent Composites formed.

Robert Hathaway, a UW-Milwaukee alumnus and vice president of Global Technology – Materials and Process Engineering at Oshkosh Corp., has collaborated on research projects with Rohatgi for two decades.

“We believe these materials have commercial merit,” Hathaway wrote in a letter supporting the startup’s application for a Small Business Technology Transfer grant. “Should Intelligent Composites achieve the goals outlined in the federal grant application, Oshkosh Corporation would be interested in giving this technology a closer look.”

Although much more testing is ahead, the team also is executing a two-pronged game plan to break into the market.

Weiss is introducing the composite parts to original equipment manufacturers, or OEMs. These companies, like the major automakers, outsource production of parts used in their final product and can influence others.

“These are disruptive materials that call for the suppliers to change manufacturing processes,” Weiss said. “And manufacturers are not as accepting of change as some of the high-tech companies are.”

Growth potential may help nudge them, Rohatgi said. There are at least 25 other vehicle parts that could become more energy-efficient if made with the composite.

Jordan and Beno are focusing on a second front. They plan to make and sell engine cylinder liners for power sport vehicles – ATVs, snowmobiles and watercraft.

“We first want to approach a group that could be early adopters,” Weiss said. “Racers are willing to do anything quickly that will give them a competitive advantage.

Winning over power sport vehicle users would help validate the technology and show other OEMs that customers want to see Intelligent Composites components in their vehicles, Jordan said.

Grateful for the university’s support, the Intelligent Composites team granted 1 percent equity in the startup to the UWM Research Foundation.

“I feel like the university environment allowed this work to grow,” Rohatgi said. “Our partnership holds an important tech-transfer lesson on the critical role of testing great academic ideas in the industry environment. Each one helps propel and hone the other.”
___