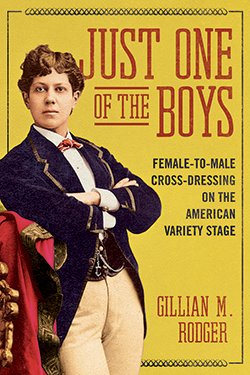 In 19th-century American theater, mature actresses and dancers seeking to extend their careers sometimes chose to perform female-to-male cross-dressing in variety shows. They engaged in the type of rowdy comedy acts previously reserved for men. Gillian M. Rodger, professor of musicology and ethnomusicology in the Peck School of the Arts, details the practice of male impersonation while examining the history of variety shows from the mid-19th to the early-20th century. As their working-class audiences increasingly identified with more restrictive middle- and upper-class cultures, Rodger writes, those audiences wanted the performers’ impersonations to be less realistic. To comply with those preferences, performer repertoires grew more like that of female singers.