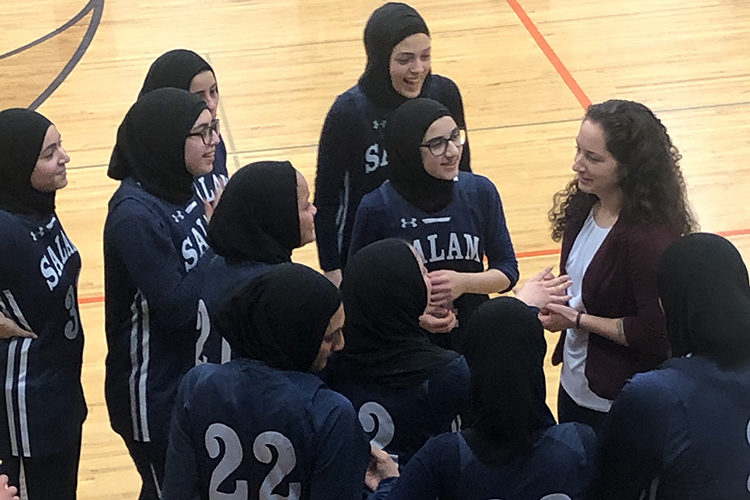 Kassidi Macak wasn’t quite sure what to expect five years ago when she interviewed for a basketball coaching position at Salam School, a Muslim preparatory school on Milwaukee’s south side.

Her former coach at St. Francis High School encouraged her to apply, so Macak went to the interview, but she was doubtful she’d accept the job.

“I went into the interview thinking I probably wouldn’t do it, but (Salam) Athletic Director Dave Petrick convinced me. I thoroughly enjoy it and think it’s one of the better decisions I ever made.”

Macak, who graduated from UWM with a BS in kinesiology in 2014, is now assistant athletic director and teaches physical education at Salam, as well as coaching one of the few all-Muslim female high school teams in the country.

The team, the Salam Stars, have attracted a great deal of attention. The team has been featured on CNN, CBS Sports and in the Washington Post, as well as in local media.

Since she is not Muslim, Macak faced a “long learning curve about religion and culture,” but the team’s focus has always been on basketball. “When we did the pre-hire, meet-the-coach thing, they were drilling me with basketball questions – ‘What are we going to do on defense, what are we going to do on offense, how long have you been playing?’ They wanted to see if I’d be a good basketball fit — they were definitely  wanting to get better at basketball.”

Macak relied on her players to help her with any questions she had about religion or culture.

“At first it was a super big learning curve, but I went to two seniors and said, ‘I don’t know anything about your religion or your culture.  Can I come to you if I have questions?’ They were super helpful.” The students told her not to worry: ‘Oh, no, anything you want to ask us, don’t feel stupid, a lot of people don’t know. Don’t feel weird,’” Macak said.

She made occasional funny missteps, Macak said. The team and coach often exchanged treats from their cultures to celebrate holidays. One year, Macak decided to bake Christmas cookies, using a recipe from her aunt and uncle in New Mexico. Being young and busy, she was mixing them at midnight when she discovered the recipe called for lard. As a novice baker, she texted her mom, “What is lard?” Her mom explained it is pork fat. Pork, of course, is not part of the diet for observant Muslims. She gave the cookies to her relatives and brought candy to her amused team the next day.

Like many other high school athletic teams, the Stars were saddened and disappointed when the school’s 2021 basketball season was canceled because of the COVID-19 pandemic. “When I told them, they were pretty disappointed, especially the seniors,” Macak said.

The Stars play in the newly created Lake City conference, which includes nine small prep and private schools. The other teams and their fans are used to the Stars taking to the court in long-sleeved jerseys, long pants and the traditional hijabs. The hijab – a scarf-like head covering – is one element of the uniform that sets them apart.

In recent years, athletic governing bodies have lifted prior bans on the hijab, eliminating a barrier that had forced many Muslim women to choose between their sports and their faith. Now, sports hijabs are available, replacing longer, looser versions. And the players have become adept at adjusting the head coverings on the fly, said Macak, even tucking them inside their jerseys if they need to.

While some of the media coverage attracted a few rude and nasty online comments, Macak said, other teams and fans they meet in person generally treat them as just another basketball team. One well-intended official did ask if the team would be offended if the national anthem was played. Macak explained team members were all Americans and they were playing in America.

“I didn’t say that was a dumb question because I probably had dumb questions of those two seniors my first year too. They were just trying to be courteous, and they didn’t know any better,” Macak said.

Macak was attracted to UWM by the strong sports fitness and kinesiology program, and has kept up ties with mentors and faculty in the College of Health Sciences. Professor Barbara Meyer, who’s an expert in sports psychology, has offered Macak’s team sessions on overcoming performance stress and anxiety.

Her experience at Salam has taught her a lot about Muslim religion and culture, but also about basketball, said Macak. “I wasn’t sure I wanted to be a coach or work with young people, but learning to be a coach has been fun.”

And while the team is all about basketball, team members also are proud of their role in representing their religion and culture to others, she added. They have taken media attention in stride, said Macak. They are nervous but poised while answering questions, seeing opportunities to overcome stereotypes. “With social media — Facebook and Instagram and TikTok – they see other Muslim women influencing sports, and say, ‘You know, we’re doing the same thing, and that’s really cool.’”