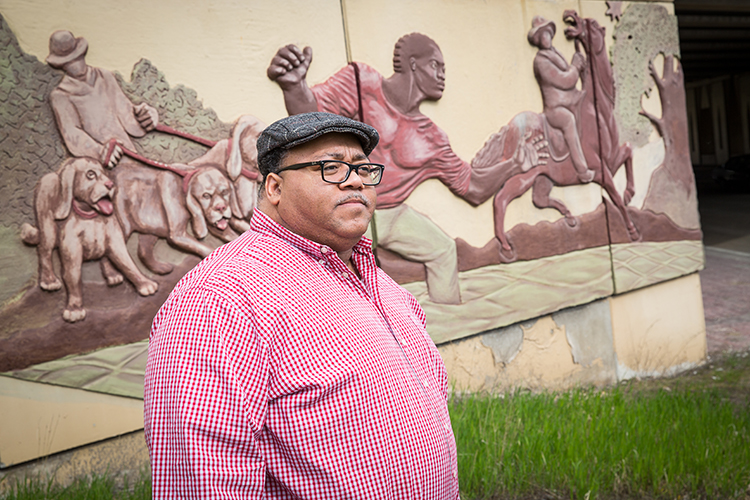 Steven Anthony (history) is researching untold and mis-told stories of African-American history. For his dissertation, he has documented the dynamics of race, class and labor that contributed to the 1919 race riot in Elaine, Arkansas, but were never acknowledged in historical accounts. Anthony asserts that, at the end of World War I, black Americans were “inspired by their sense of authentic citizenship” to push back against racism. The violence in Elaine, which took about 200 African-American lives, began when black sharecroppers were trying to form a labor union. Anthony found that inaccurate accounts have allowed racially based animosity to linger for nearly 100 years. (UWM Photo/Troye Fox) 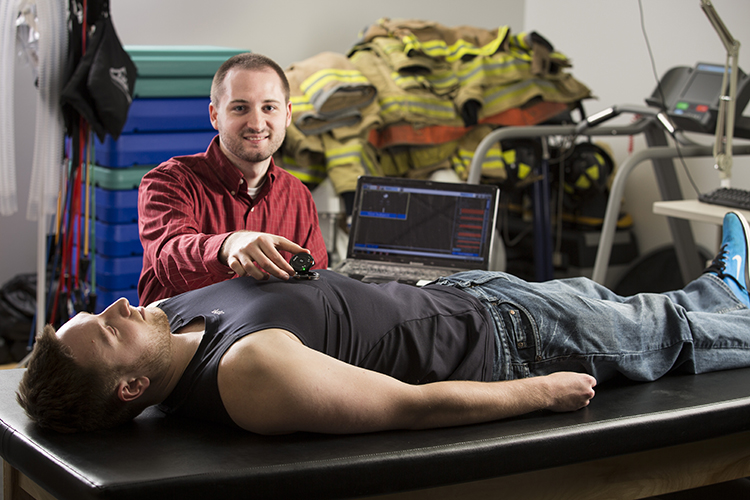 David Cornell (kinesiology and physical therapy) uses heart rate variability (HRV) – the change in the time between heartbeats – to assess cardiac function and measure physiological stress among professional baseball players. He plans to use HRV to better understand the demands of firefighting on the body and develop strategies to reduce injuries and prevent life-threatening cardiac problems. Cornell recently published a paper using HRV with professional baseball pitchers and will be a student physical therapist during the Milwaukee Brewers’ spring training in Arizona in 2018. (UWM Photo/Troye Fox) 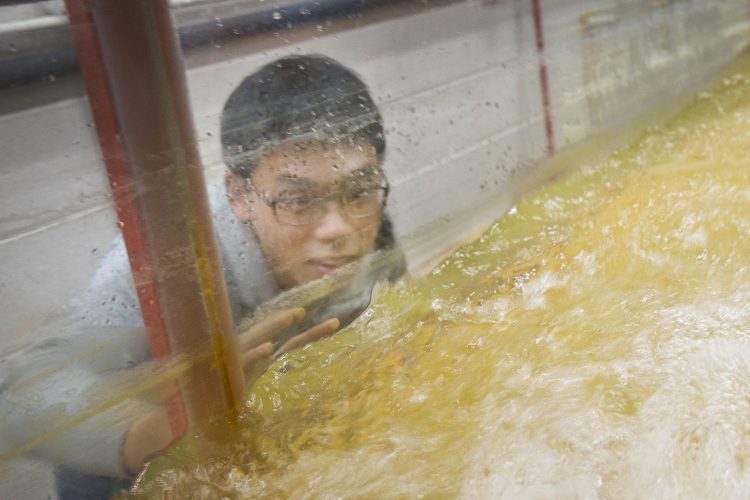 The physics of waves and wind-driven currents in water reveal a lot about the ecology and health of lakes. Special equipment developed in Qian Liao’s hydrology lab allows researchers to study the aspects of turbulence and water transport in the lake environment instead of the lab. With a particle image velocimetry system, graduate students such as Tong Jin (engineering) can track and take high-resolution pictures of how the water moves at various depths in Lake Michigan. This information will help scientists answer questions within and outside the lake such as, “Do lakes contribute or accumulate atmospheric carbon dioxide?” (UWM Photo/Troye Fox) 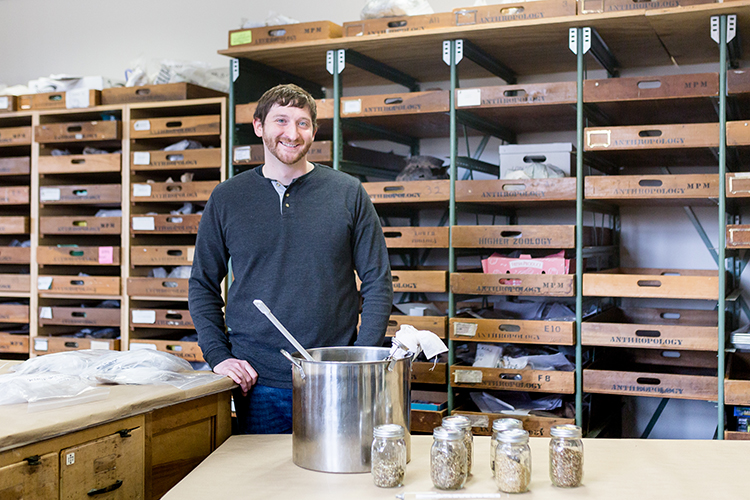 Iron Age people living in what is now Germany were buried with, among other things, their alcohol. UWM archaeologist Bettina Arnold retrieved some remnants of that while excavating graves. It was exactly the research that graduate student Joshua Driscoll (anthropology) was interested in. Driscoll helped Arnold re-create a 2,500-year-old brew, called a “braggot,” a pre-hopped barley and honey-based alcoholic beverage. The drink was flavored with botanicals such as meadowsweet and mint. “Alcohol’s a really important part of ritual,” Driscoll told National Public Radio. “It helps us kind of pay attention to a specific moment in time.” (UWM photo/Elora Hennessey) 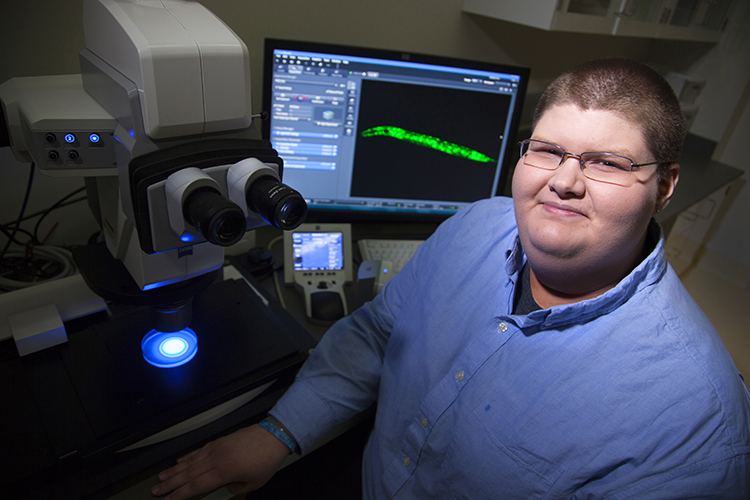 Katrina Lenz (public health) points to the many green fluorescent spots that appear on a worm under a microscope. They are areas of oxidative stress. “This is a highly stressed worm,” she says. But she isn’t surprised: The worm had been exposed to the chemical triclosan, an antimicrobial found in a range of consumer products. Oxidative stress is an indicator of a potential toxic effect from exposure to the chemical. And if it is harmful to the worm, it’s likely that it’s harmful to people. Lenz investigates how persistent environmental contaminants, such pharmaceuticals and personal care products, affect the endocrine and nervous systems using worm and fish models. Her hope is that this research can help steer public policy for chemical regulation. (UWM Photo/Troye Fox) 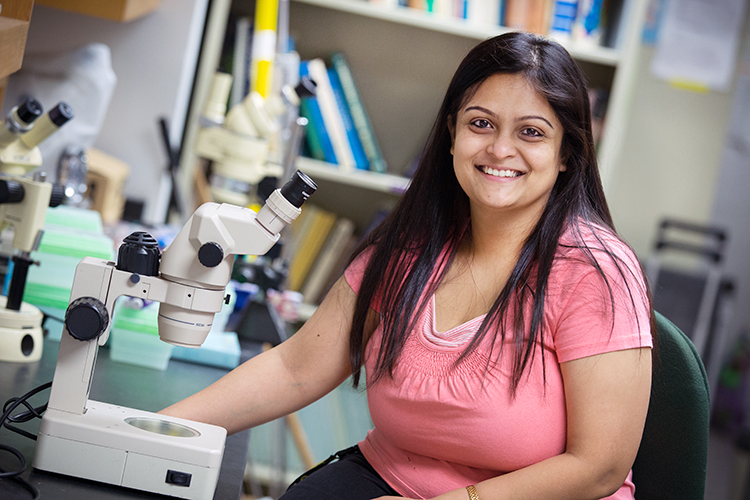 Many family businesses, toiling to join the middle class in India, make a living by dyeing the fabric used to make colorful saris, the traditional garment of Indian women. But Subhomita Ghosh Roy (biological sciences) says there’s a harmful downside: The resulting wastewater, contaminated with chemical dyes, is often dumped into the environment. Ghosh Roy’s research has shown that the growth of plants cultivated in contaminated soil is stunted. What alarms her even more, however, is that chemicals could make their way up the food chain and pose a threat to human health. She hopes to return to India and help improve environmental policy. (UWM Photo/Troye Fox) 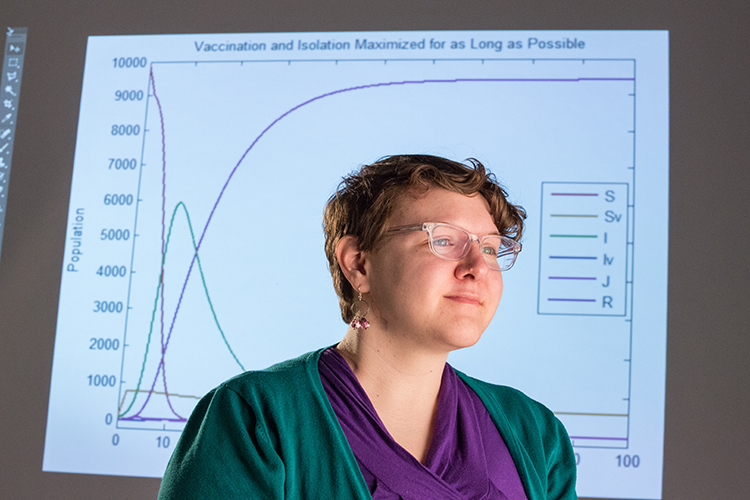 Epidemics are a threat to public health, especially in underdeveloped countries, where outbreaks of disease, from Ebola to bubonic plague, are prevalent. To manage these in a way that results in the fewest fatalities, Rachel Elizabeth TeWinkel (mathematical sciences) contends models are our best bet. The biology undergrad-turned-math-graduate-student studies optimal control models that can be used under a variety of conditions. These models make cause and effect clearly visible, says TeWinkel, helping responders decide, for example, who should be vaccinated first during an outbreak in order to have the greatest effect on mitigating the spread of disease. (UWM Photo/Troye Fox)

Graduate student inquiry forms the backbone of UWM’s productivity as a research institution. And the quality of that work has paid off. Last year UWM was named one of the nation’s top 115 research universities as recognized by the Carnegie Classification of Institutions of Higher Education.

In Wisconsin, only UWM and UW-Madison received this rating, often referred to as R1.

More than 4,600 graduate students conduct research at UWM in nearly 100 academic programs. Many are presenting their discoveries at academic conferences across the globe or publishing in high-profile journals. Others are applying their scholarship right here in the local community. Here are just a few of these projects born from UWM’s culture of innovation.