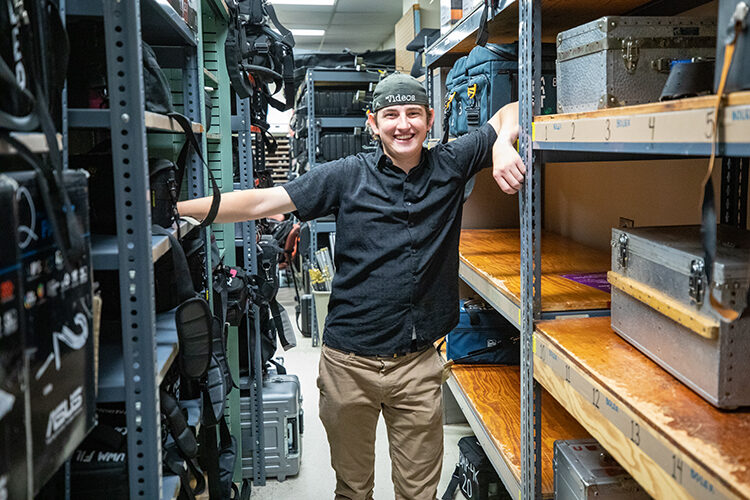 Caring for someone with dementia can be a difficult, loving journey.

UWM first-year film student Riley Killian captured that reality in a 45-minute documentary on the experiences of caregivers – “Unconditional: A Journey of Selfless Love.”

The documentary was shown at venues in the Fox Valley area during October, and Killian is working to get it set up on streaming services.

“I’d never had any prior experience with family caregiving or dementia,” said Killian, who is from Appleton. “It was really cool and interesting to dive into this project and discover all these amazing stories of what these family caregivers go through.”

His involvement with the documentary grew out of a video production business, RK Videos, that he started two years ago. Family Caregivers Rock, an Appleton-based agency (now dissolved) hired him to film a two-person play by John Weyers about his 15 years as caregiver for his wife with dementia. A board member then suggested Killian might want to do a documentary about caregivers.

“I had just started my gap year after high school, so I said, ‘Absolutely. I want to pursue this full-time during my gap year.’”

Working with a longtime friend and film colleague, Aidan Wallace, he began researching dementia and Alzheimer’s, reading the memoirs and journals of caregivers. One of the stories was “My Two Elaines,” written by former Wisconsin governor Martin Schreiber, about his Alzheimer’s experiences caring for his wife. Elaine Schreiber died in April of this year.

The documentary shows the journeys of four caregivers who shared their stories.

Families want to tell their stories

Killian prepared questions but was initially not sure how to approach interviews with them.

“I didn’t want to personally poke at things that were sensitive or that they didn’t want to talk about, but all of them said, “No, let’s talk about it, let’s show people what it really is to be a family caregiver.’”

The filmmakers included interviews as well as photos and footage of the caregivers’ lives. “We got to experience what they went through daily and how they reacted to different challenges that came up every day. They were very open with their personal lives, and we appreciated that.”

In two cases, Killian and Wallace had to rely on family photos rather than film because the spouse with dementia had died or was in a memory care unit where access was limited by COVID restrictions.

The documentary received financial support from the Green Bay Packers Foundation and an anonymous donor.

Killian’s interest in film started in fifth grade and grew out of his family’s weekly movie nights. After watching “Star Wars” one night, he was particularly interested in the extra features showing how the movie was made. “I told my mom and dad…I want to do that. That’s what I want to do for the rest of my life.”

He chose to come to UWM because it was only an hour and a half away from his hometown and was ranked one of the top film schools in the country.

“Unconditional: A Journey of Selfless Love” debuted in October just as Killian started his journey as a film student at UWM. So far, it’s been shown at community and senior centers, and it’s offered to agencies for the aging and nursing schools around the state. The showings are free.

When the documentary was shown at the Marcus Bay Park Cinema in Ashwaubenon in October, Killian had the chance to meet with the friends and families of those featured in the film as well as others making similar journeys.

“People came up to us afterwards and were hugging us with tears in their eyes, saying ‘thank you so much,’” Killian said.

“That’s really why I love film so much, because it resonates … You can connect with people on a personal level. That is super rewarding.”