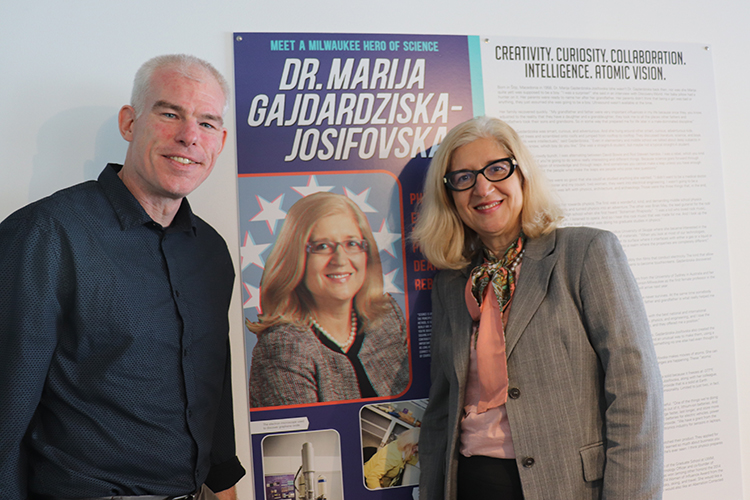 The dean of UWM’s Graduate School and physics professor Marija Gajdardziska-Josifovska has been selected to be featured in Discovery World’s “Heroes of Science” gallery.

A selection of 37 posters features the unsung heroes of science, engineering, astronautics and research. Two of the posters feature Milwaukee scientists, including Gajdardziska-Josifovska. Guests wear 3D glasses to tour the interactive gallery and uncover hidden messages.

“We wanted to highlight a few extraordinary people who have done some incredible science and have changed the world in some way,” said Ryan Kresse, Discovery World’s senior exhibit content strategist. “This experience tells the surprising stories of interesting people who did or are doing remarkable work.”

Gajdardziska-Josifovska was selected for her research on the behavior of nanomaterials used for sustainable energy and environmental applications. She and another UWM physics professor, Carol Hirschmugl, developed a material not found in nature called graphene monoxide, which is used as an electrode in the lithium-ion batteries that are found in electric cars and consumer technologies. Gajdardziska-Josifovska and Hirschmugl founded a startup company, SafeLi LLC, to commercialize the material and sell battery components that improve battery life and storage in electronic and wireless power devices.

As the founder and director of the Laboratory for High Resolution Transmission Electron Microscopy in UWM’s physics department, Gajdardziska-Josifovska is pictured in the gallery with her Hitachi microscope and statements about what fascinates her about physics and microscopy.

“It’s an honor,” Gajdardziska-Josifovska said in response to her selection. “I think it’s a huge privilege to work on a question that nobody in the whole world knows the answer to, and it still gives me goosebumps.”

Gajdardziska-Josifovska joined UWM’s physics department in 1993 as its first female faculty member and is the first woman to hold the position as the university’s graduate school dean.

“In physics, the science we work on is genderless,” Gajdardziska-Josifovska said. “I was lucky to grow up in a place where nobody told me that physics was just for boys.”

Scientists can be anybody

She is one of only two UWM recipients to win the Presidential Early Career Award for Scientists and Engineers in 1995, which is awarded by the U.S. government to professionals in the early stages of their research.

“Gajdardziska-Josifovska is probably the most successful scientist I’ve ever had the chance to talk with,” Kresse said. “She’s completely wonderful, and the technologies that she and her team are developing around graphene monoxide are fascinating.”

“Heroes of Science” aims to showcase the idea that scientists can be anybody. By humanizing the people behind the math and the research, the experience encourages curiosity, drive, determination, intelligence and interest community-wide, Kresse said.

Gajdardziska-Josifovska pondered the question of what a scientist looks like to her.

“I’ve always felt that scientists are portrayed by the media in the most erroneous way,” she said. “We’re either Dr. Goofball or Dr. Evil and nobody in between. I think a scientist is someone who gets excited when there is no answer to a question yet rather than being scared or disappointed.”

Open through end of the year

The gallery features other scientists such as Deborah Jin, who invented the first fermionic condensate; James Edward West, who created the type of microphone used in smartphones and speakers; Emmy Noether, who contributed to mathematical breakthroughs in quantum mechanics; and Walter Lincoln Hawkins, who developed a durable plastic additive.

Coinciding with Discovery World’s Girls & STEM event, the “Heroes of Science” experience promotes the idea that everyone is a “science person” with an intricate, curious brain that works to make sense of the complex and dynamic planet and universe, Kresse said. The gallery is expected to be open through the end of the year.

“When you do science, you end up playing like a kid who is learning about the world and asking questions,” Gajdardziska-Josifovska said. “Being published in journals everywhere on the planet is almost like a form of immortality because what you discover about how the world and how nature works will stay there.”