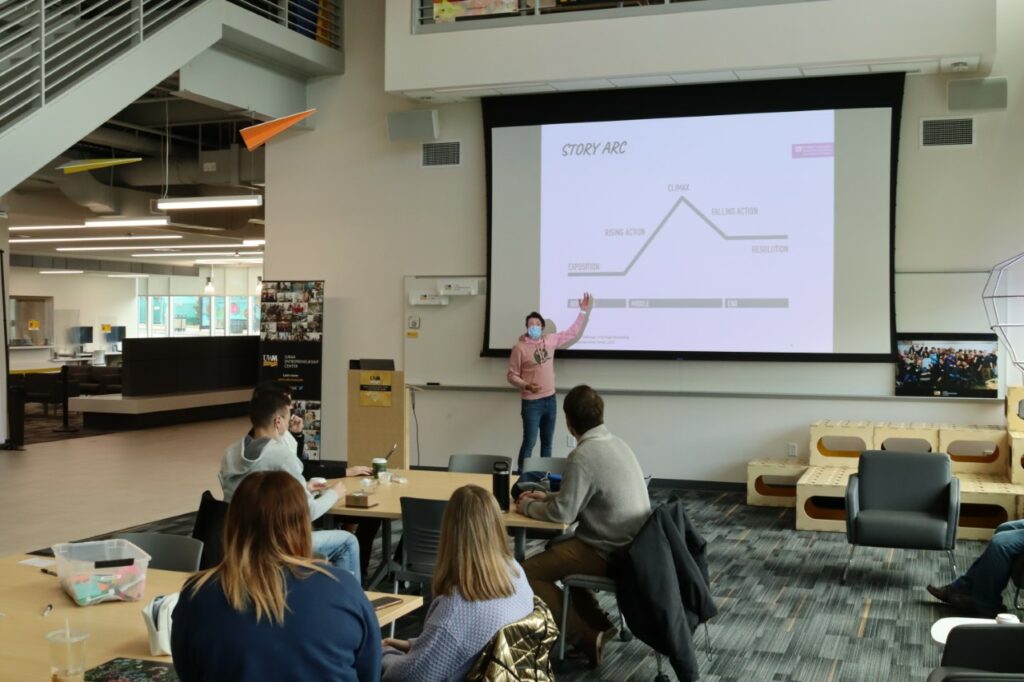 On December 4th, the Lubar Entrepreneurship Center kicked off the Pitching and Storytelling Startup Challenge Booster with mingling and refreshments. After each participant arrived, the booster began in full.

As with many LEC events, it started with a ‘stoke’ – a short icebreaker designed to make swift introductions and energize everyone up. This particular stoke was called ‘I’m late because,’ which involved participants giving fictitious excuses explaining why they were ‘late’ – such as referencing funny films from the past. Afterwards, a discussion was held that centered on dissecting “what makes for a good story?” Most people mentioned things like an interesting plot, emotional peaks, and characters. These elements were then put into action in the following activity: two-line stories. Two lines were formed – one for people who would be giving a single-line prompt, and one of people who would be giving a single-sentence response. This helped to get the participants into several frames of mind: being spontaneous, building a ‘who/what’ while explaining a ‘why,’ and expanding on what your partner was saying

Next, Startup Challenge Director Dr. Nathaniel Stern talked about story arcs, what they are, why they matter, and how they work. Examples of effective advertisements using elements of a story arc were given, with a focus on how they emotionally affected the viewer. Dr. Stern then covered how this could be used for a business pitch in order to make a more effective, personal story.

Following this, the participants got into the core of the event: sharing everyone’s startup story arc. Each person created their startup story arc on a whiteboard with their initial preconceptions, big changes to their understanding of a situation, and how they responded to those changes. LEC members mingled and worked with the participants, helping them to refine their ideas. After a talk by the College of Nursing’s Dr. Jennifer Kibicho, everyone began preparing for the next part of the day – elevator pitches. Each participant focused their pitches not to an ambiguous, ill-defined group or organization, but to one specific person. After twenty minutes of preparation, the pitching began. Pitches were supposed to be below two minutes, and after each presentation audience members gave feedback on positive elements and constructive criticisms. Finally, everything wrapped up with a review of what had been covered and a personal takeaway from everyone in attendance.

There may not be any more Boosters this year, but the next Startup Challenge is just around the corner and filled with more events. Check out the Startup Challenge page for important information on upcoming events and dates.