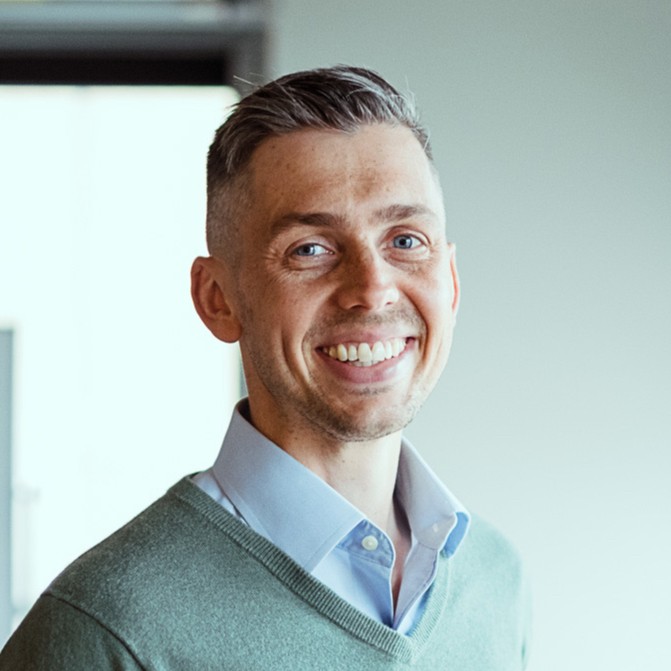 Startup Wisconsin Week, a networking event that brings tech founders, startups, investors, and talent together across the state, is right around the corner. So, we sat down with Kris Eul, UWM alum and Founder of Kinetic – the platform for Startup Wisconsin – to speak about his experiences with entrepreneurship.

Please give us a short introduction to yourself.

Kris Eul: “I graduated from UWM in 2009, which seems like a lifetime ago! I went to school for Marketing and was part of the UWM American Marketing Association throughout college. While I was a student at UWM, I started and sold my first company. That was kind of my ‘A-ha’ moment of entrepreneurship, and I tried to go the unconventional route and see if I could make a career out of building companies.”

Speaking of companies, could you also give us a description of Kinetic?

Kris: “What we do is we partner with different organizations and communities to help connect the right people at the right time. Based on aligned and complementary interests, we can help accelerate relationships and progress for members within the groups that they are a part of. This is great for the members because they can learn anytime, anywhere, but is also great for the community leaders that we support as we can bring value at scale in a much more effective and accurate manner.”

You started Kinetic after working at another job for a while after college. What was that experience like?

Kris: “I gave corporate the three-strike rule. I took five internships while I was at UWM, which was probably a bit overboard! I worked at GMR Marketing for three years; one year was in the office, and the following two years I was a Tour Manager for Nissan. Finally, I worked at Taste of Home, which is now a part of Trusted Media Brands. Each of those was great and I met some fantastic people, but I was always a little biased towards small business and starting a company because I grew up on it. My parents owned a restaurant for most of my upbringing, so I really wanted to get a feel for what that was like and get in a little bit earlier on some of these companies and ventures. It was quite a change of pace – of course, it didn’t pay the most, so I was willing to make a bit of a sacrifice there. After doing the three corporate gigs for a few years, I joined an early-stage company here in the Twin Cities on the sales team for five years and had success there.”

What has it been like being with Kinetic from the beginning?

Kris: “You see everything. When the pandemic happened, it was this inflection point where I could either keep doing the same thing I’ve always done or really bank on the idea that we’re never going to fully go back to the way that things were post-pandemic. Whatever this new norm is, we’re going to have to adjust our behaviors with work-from-home and hybrid working models being able to be more flexible.

When the pandemic began, we put a simple landing page up. It was a moment where we put up a website and hear what people have to say and see if anyone signs up. It had a form for a name and email, and then we’d follow up and do a customer interview with them. We were very much leaning into design thinking – listen to your prospective customers first before going off and building. Let’s find a problem instead of building a solution and looking for a problem. We had about 110 people sign up and I talked to every single one. What I found was this continuous theme where they were on LinkedIn, but they wanted to find ways to bring meaning back into their professional relationships. They would add someone on LinkedIn or Slack and it would end there, maybe exchange a few messages or like a post, but it was very surface level.

Two months later, we started matchmaking individuals based on aligned interest – what am I looking to learn, what am I looking to share, how does that complement other members that want these introductions. On paper, we only had about 100 groups, so we didn’t have the most aligned people to bring together. We would make these matches and I would send long-formatted messages describing why we were matching you and what you had aligned interests in. Some of the matches felt like they were never going to work, but we got feedback and they would say things like, ‘Hey, we didn’t necessarily align on paper, but I know this person and they’ll make an introduction here,” or, ‘they have experience in this space and referred me to a tool or resource.’ We found early on that everybody knows someone and something that we don’t, so the marketplace is knowledge – we’re exchanging knowledge. Share what you know, learn what you don’t was the common theme that we picked up on. People are really craving connection, right now especially.

We started as a B2C company, but in January 2021 we pivoted to B2B and focused on organizations and communities. We saw that there was a big opportunity with community leaders where they’re trying to support the masses, but they’re typically understaffed, and they don’t have a ton of resources. Hiring more people isn’t going to help scale. How can you be able to, in a systematic way, serve so many people at once? This is the solution we came up with.”

Did you feel that from the beginning there was a ‘yes, this is what we want to be doing’ or was there a tipping point along the way?

Kris: “It was more so ‘let’s let the interviews and feedback dictate what we build.’ I took a program a couple of years ago for entrepreneurship and something that resonated with me was ‘plan to discover.’ We all have this idea, this vision as entrepreneurs, of what we want to build, and there’s typically a delta between what we want to build and what’s needed. I really encourage entrepreneurs to lean into your customers and others who provide feedback; wherever there’s a pain point there’s a priority, and where there’s a priority there’s going to be profit.”

What is the most valuable thing you learned at Kinetic?

Kris: “There are a couple things. One, be patient. There can be a general narrative that being part of a startup will mean you blow up overnight or soon thereafter. Just stick close to the problem that you’re solving, which means sticking close to the customer or prospective customers that you’re serving or trying to serve. Let the problem that you’re solving be your north star. There other thing is that you don’t have to be a unicorn to be successful. Once you start making money or raise that first round of cash, it’s easy to say, ‘we’ve made it, close the books.’ That’s when the work is just starting. The narrative around raising capital being something other than an instrument in the field of growth to the next stage can be misleading. There is life after raising money. You’ve hit a milestone, but there’s still a lot of work to be done and you’re just getting started.”

Let’s transition to Startup Wisconsin Week. Could you give us a description of what it is and how you got involved?

Kris: “Kinetic is the official platform for Startup Wisconsin. It’s happening from November 14th through the 18th both in-person and virtual and covers eight different cities throughout the state. It’s a celebration of entrepreneurship statewide. We get stakeholders and ecosystem leaders to come together through the events and networking sessions. Different this year, which I’m really excited for, is that it’s also going to be offered year-round. Through the Startup Wisconsin community page on Kinetic, we can have weekly introductions amongst other ecosystem leaders and builders and investors. We can have these office hours where we talk about MVP feedback. customer interviews, fundraising, dos and don’ts – and I will tell you all the don’ts there are to know, because I’ve learned them firsthand. There are also monthly industry coffee clubs where we have a monthly design coffee club and a monthly first-time founders coffee club. The same people meet every month and it’s used as their sounding board to help get to that next stage. Regardless of the age and stage of your startup, we can work together to be a resource for one another. What we find is that even though a lot of the challenges that we see as part of an ecosystem seem unique, they are not. Someone has gone through what we’re going through right now that we can lean on, ask questions of, get help from, and be the resource we wish we had 15 years ago. A rising tide lifts all boats, and that’s a really good thing for the startup ecosystem.”

Interested in connecting with Kris or attending Startup Wisconsin Week? Check out the links below to learn more.