First, let’s start off with the most frequently asked questions about Personal Gender Pronouns (PGPs).

What if I make a mistake?

It’s okay! Everyone slips up from time to time. The best thing to do if you use the wrong pronoun for someone is to say something right away, like “Sorry, I meant (insert pronoun)”.

If you realize your mistake after the fact, apologize in private and move on.

A lot of the time it can be tempting to go on and on about how bad you feel that you messed up or how hard it is for you to get it right. Please don’t! It is inappropriate and makes the person who was misgendered feel awkward and responsible for comforting you, which is absolutely not their job.

Taking an active role in your classes, you may hear one of your students using the wrong pronoun for someone. In most cases, it is appropriate to gently correct them without further embarrassing the individual who has been misgendered. This means saying something like “Alex uses the pronoun she,” and then moving on. If other students or faculty are consistently using the wrong pronouns for someone, do not ignore it! It is important to let your student know that you are their ally.

It may be appropriate to approach them and say something like “I noticed that you were getting referred to with the wrong pronoun earlier, and I know that that can be really hurtful. Would you be okay with me taking them aside and reminding them about your pronouns?” Follow up if necessary, but take your cues from the comfort level of your student. Your actions will be greatly appreciated.

How do I ask someone what pronouns they use?

Try asking: “What pronouns do you use?” or “Can you remind me what pronouns you use?” It can feel awkward at first, but it is not half as awkward as making a hurtful assumption. Also asking about when you can use those pronouns helps protect people from being outed; this can sound like “Are there any situations where you don’t want me to use these pronouns?”

If you are asking as part of an introduction exercise and you want to quickly explain what gender pronouns are, you can try something like this: “Tell us your name, where you come from, and your pronouns. That means the pronouns that you use in reference to yourself. For example, I’m Xena, I’m from Amazon Island, and I like to be referred to with she, her, and hers pronouns. So you could say, ‘she went to her car’ if you were talking about me.”

It is important to remember that by consistently asking people for their pronouns, you can help create a more normalized and safe way for others to share their pronouns, which they may not have been able to do before.

Why is it important to respect people’s pronouns?

When someone is referred to with the wrong pronoun, it can make them feel disrespected, invalidated, dismissed, alienated, or dysphoric (often all of the above). All major professional American psychological and psychiatric associations recognize that inclusive language usage for LGBTQ+ youth and adults drastically decreases experiences of depression, social anxiety, suicidal ideation, and other negative mental health factors.

It is a privilege to not have to worry about which pronoun someone is going to use for you based on how they perceive your gender. If you have this privilege, yet fail to respect someone else’s gender identity, it is not only disrespectful and hurtful, but also oppressive.

What are some commonly used pronouns?

There are also lots of other pronouns in use, some of them more gender neutral. Here are a few you might hear:

Some people also use more than one set of pronouns. This can be denoted as “they/she” or “they/them/theirs and she/her/hers”. When someone uses multiple sets of pronouns, it could mean that they are okay with either one being used, or that they accept both, but have a preference towards the one that is listed first. If you have any questions, respectfully ask the person! A person of any gender can use multiple sets of pronouns.

Purposefully misgendering (using the wrong pronouns, ignoring someone’s pronouns in use, or using incorrect gendered language for someone) is offensive and disrespectful to anyone, but especially to trans and gender non-confirming individuals.

What is a pronoun?

A pronoun is a word that refers to either the people talking (“I” or “you”) or someone or something that is being talked about (like “she”, “it”, “them”, and “this”). Gender pronouns (he/she/they/ze etc.) specifically refer to the person you are referring to.

Pronouns are part of someone’s gender expression, and people can have multiple sets of pronouns for themselves (such as using both he/him/his and they/them/theirs). Pronouns are not “preferred” but instead are required for respectful communication. Not only transgender or nonbinary communities use pronouns, as it is something we all use and have since we were little.

Pronouns – A How To Guide 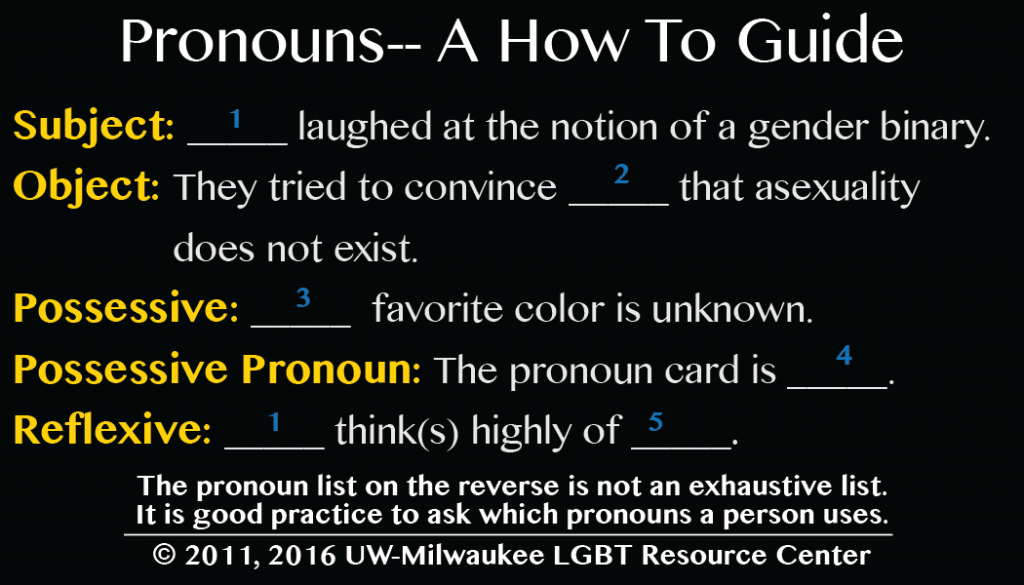 Note: the top line is meant to indicate two separate – but similarly spelled – sets of pronouns. They are ae/aer/aers and fae/faer/faers.

A gender neutral or gender inclusive pronoun is a pronoun which does not associate a gender with the individual who is being discussed.

Some languages, such as English, do not have a gender neutral or third gender pronoun available, and this has been criticized, since in many instances, writers, speakers, etc. use “he/his” when referring to a generic individual in the third person. Also, the dichotomy of “he and she” in English does not leave room for other gender identities, which is a source of frustration to the transgender and gender queer communities.

People who are limited by languages which do not include gender neutral pronouns have attempted to create them, in the interest of greater equality.

“Ou, a”: Native English Gender-Neutral Pronouns. According to Dennis Baron’s Grammar and Gender:

He goes on to describe how relics of these sex-neutral terms survive in some British dialects of Modern English, and sometimes a pronoun of one gender might be applied to a person or animal of the opposite gender.

In 1770, Robert Baker suggested use of “one, ones” instead of “one, his”, since there was no equivalent “one, hers”. Others shared this sentiment in 1868, 1884, 1979, and even now. Others throughout this period disagreed, finding it too pedantic.

Around 1795, the language authorities Lindley Murray, Joseph Priestly, and Hugh Blair, amongst others, campaigned against pronoun irregularities in pronoun use, such as lack of agreement in gender and number. Without coining words, this can only be done in the third person singular by use of compound terms like “his or her”. Grammarians in 1879, 1922, 1931, 1957, and the 1970s have accepted “they” as a singular term that could be used in place of “he” or “he or she”, though sometimes limiting it to informal constructions. Others in 1795, 1825, 1863, 1898, 1926, and 1982 argued against it for various reasons. And whatever the grammarians might argue, people have been using the singular “they” for about the last 600 years, though (as mentioned earlier) it can only be applied in certain cases. If new gender-neutral pronouns are not adopted, i’m sure that singular “they” will still be a point of contention for centuries to come. For further information on the use of singular “their” throughout the centuries, see the large body of information that Henry Churchyard has compiled on the subject.

This work is licensed under a Creative Commons Attribution-NonCommercial 4.0 International License.