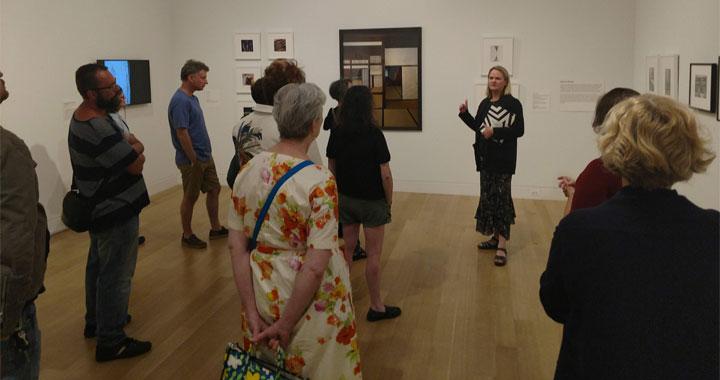 UWM History professor Jasmine Alinder delivers a gallery talk at DePaul Art Museum in Chicago on Sept 6 for the opening of the Someday, Chicago exhibit she co-curated. The exhibit explores the work of Japanese American photographer Yasuhiro Ishimoto. Photo courtesy of Jasmine Alinder.

When Japanese Americans were incarcerated in prison camps during World War II, contraband included items like weapons, ammunition, and cameras.

Luckily for Yasuhiro Ishimoto, the rules on cameras were relaxed in compounds outside of the U.S. west coast. Held in the Amache camp in Colorado, Ishimoto gained access to a camera and began forming an artistic eye that would become the basis of a prolific photography career.

Today, Ishimoto, who passed away in 2012, is celebrated as a gifted artist and his photographs hang on the walls of the DePaul Art Museum in Chicago as part of the Yasuhiro Ishimoto: Someday, Chicago exhibition showcasing his work. The exhibition is co-curated by UWM History professor Jasmine Alinder. As an expert on photography and on Japanese American war-time incarceration, Alinder hopes that audiences will not only appreciate the images, but also ask themselves an important question: What does it mean to be American?

“How do we make claims to American-ness? Who decides who is American and who isn’t American? What does citizenship mean?” Alinder asked. “Those were all questions that were put to Ishimoto during his World War II incarceration that we’re still asking today.”

Yasuhiro Ishimoto was born in 1924 in San Francisco to Japanese immigrants. He spent his childhood in Japan and returned to the U.S. as a teenager. After the Japanese bombed Pearl Harbor in 1941, Ishimoto was among the thousands Japanese Americans swept up in prison camps after the American government questioned their loyalty as citizens.

The War Relocation Authority, in charge of running the prison camps and resettling their prisoners, relocated Ishimoto to Chicago after his release. There, he found a supportive community of photographers who encouraged him to enroll in Chicago’s Institute of Design. Established as the new Bauhaus in 1939, the photography program was run by famous photographer Harry Callahan.

“There aren’t very many places in the country where you could study photography, especially as an art form. In some ways, it’s extremely fortuitous that Ishimoto ends up in Chicago and becomes a product of the Institute of Design,” Alinder said.

After graduation, Ishimoto spent the rest of his life traveling back and forth between the United States and Japan. He loved Chicago, and its people became the subjects of his photography.

He published his best-known photography book, Chicago, Chicago, in 1969, the same year that he became a Japanese citizen. Alinder speculates that doing so was easier for his visas, given that his wife was a Japanese national – and because Ishimoto’s incarceration left a psychological mark.

“What I think is still lingering from the legacy of the way that the U.S. government portrayed Japanese-Americans during World War II is that people couldn’t be Japanese and American at the same time,” she said. “Those two identities were irreconcilable. Understanding Ishimoto, it’s really important that we acknowledge his American-ness and his Japanese-ness. Those identities can exist side-by-side and are important for understanding his work.”

Bringing the exhibit to life

The Someday, Chicago exhibit was born out of a chance remark. In 2016, Alinder was working on another project called the Virtual Asian American Art Museum (that project launches at DePaul in October). At an advisory meeting for the project, a board member suggested that Alinder team up with another board member curate a show about Ishimoto at the DePaul Art Museum.

Two years later, Alinder and her co-curator, John Tain from the Asia Art Archive in Hong Kong, opened the Someday, Chicago exhibition. The show includes dozens of black-and-white photographs, two cases with books and pamphlets, three films, one screen cycling through digital photographs, and one iPad.

Alinder and Tain were responsible for selecting photographs for display, as well as compiling the gallery notes and writing extensive essays analyzing Ishimoto’s life and work. One research trip took Alinder to the National Archives in Washington, D.C., where she found Ishimoto’s case file from his time in the Amache prison camp.

Most interesting was his leave clearance interview: Like all incarcerated Japanese Americans, Ishimoto was required to take a loyalty test which asked if he was willing to serve in the U.S. military and if he renounced all loyalty to the Japanese emperor.

In these transcripts, Alinder said, “You get a sense of Ishimoto creating a political sensibility. In the hearing, he is asked about his loyalty to the U.S. and if he would fight for the U.S., and he says, ‘I don’t know what I’m fighting for.’ He articulates the development of a political conscience that we didn’t really have evidence of before. That I think ends up informing the kind of work that he does later in Chicago.”

Another trip took Alinder to Ishimoto’s family home in Kochi, Japan. Ishimoto donated most of his work to the Kochi Art Museum.

“We found a photo album that Ishimoto had made pretty early on. The first half of the images are all of Amache. He took photographs of Amache, and not just any photographs – photographs that are visually compelling. … It’s important from an artistic perspective because we can see he’s starting to develop this interesting artistic vision before he gets to Chicago and goes to the Institute of Design. He’s already thinking in terms of light and texture and composition.”

The photographs in the exhibit reveal Ishimoto’s deep love for Chicago and its citizens.

“He also gives us a glimpse into late 1940s through early 1960s Chicago, and he focuses on groups of people that often go un-pictured. He spends a lot of time, in this highly-segregated city like Milwaukee, in African American neighborhoods,” Alinder noted. “He really invests his subjects with humanity.”

But Alinder suspects that even his feelings for Chicago and Japan didn’t erase the fractures in Ishimoto’s identity.

Those questions echo today as America still grapples with ideas of race, citizenship, and what it means to be American. Inspiring viewers to think about those questions may be one of the greatest legacies of Ishimoto’s work.