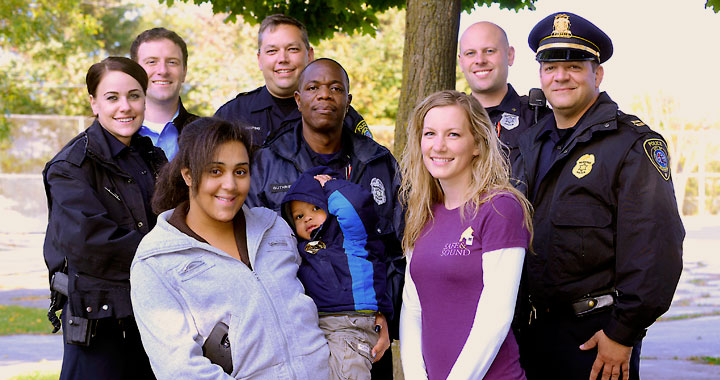 Mandy Potapenko has a deep and abiding love for the city of Milwaukee and its residents. It’s why she wants to do whatever she can to make the community healthier and safer in her new role as the Director of Milwaukee’s Community Justice Council. It’s the latest job in a career dedicated to helping people working for, and caught up in, the Milwaukee County’s justice system.

Potapenko graduated from UWM in December 2007 with a Bachelor’s degree. It was in fulfi lling the requirements of her Women’s Studies major that she discovered her passion for helping others.

“Women’s Studies required me to complete a 90-hour internship prior to graduating. I chose what was then the Task Force on Family Violence, which is now Sojourner Family Peace Center, in their restraining order clinic,” Potapenko said.

“My Women’s Studies degree really exposed me to the nonprofit community in Milwaukee. Prior to, I had never really thought about working in nonprofits.”

Her internship experience helped net her a job even before she graduated. After she walked the stage, Potapenko started with an organization known as Justice 2000, now Justice Point. Potapenko was a case manager working with individuals who, while released from jail to await their criminal hearings, had to attend classes, drug treatment, or other counseling. They met with Potapenko regularly, who reported on their progress to the District Attorney and judges.

After two and a half years, Potapenko made the switch to the private sector where she worked for an insurance agency setting up policies for nonprofit organizations. The lure of working with the actual nonprofits proved too strong, and within 10 months, Potapenko was back working with community justice organizations – this time with Safe and Sound (www.safesound.org), a nonprofit working with law enforcement to strengthen neighborhoods.

“I was provided offi ce space at District 3’s police station and worked with a group of offi cers that can be best described as a neighborhood problem-solving team,” Potapenko said. “I worked as a liaison between law enforcement and residents, as well as stakeholders and other organizations, working to build relationships around community safety.”

In addition, Potapenko served as a point of contact between the police department and neighborhood residents who, for whatever reason, felt uncomfortable talking with police. She also worked with the DA’s offi ce to fi nd creative ways to shut down drug houses and other illegal activities by targeting the houses’ code violations or declaring certain properties a nuisance.

Potapenko’s team has been recognized across the country for their innovative ways of addressing neighborhood disorder. On Aug. 18, it was announced that her team at the Milwaukee Police Department is one of two fi nalists for the prestigous Herman Goldstein Award for Excellence in Problem Oriented Policing.

Potapenko’s work and dedication to Milwaukee’s communities made others take notice. Two months ago, she was asked to step into her new role as Director of the Community Justice Council. The mission of the Council is to ensure interagency collaboration to create a more fair, effi cient and effective justice system for Milwaukee County. She now oversees eight subcommittees, each dedicated to a facet of criminal justice, like mental health, programs and interventions, community engagement, and more. In addition, she reports to the Council’s executive committee, whose members include District Attorney John Chisholm, Milwaukee County Sheriff David Clarke, Milwaukee Police Chief Edward Flynn, County Executive Chris Abele and Milwaukee Mayor Tom Barrett.

Her first order of business is to coordinate partners for the Safety and Justice Challenge award from the MacArthur Foundation that the CJC was awarded shortly before Potapenko came aboard. The grant will help the CJC examine data generated by Milwaukee’s justice system to fi nd ways to reduce the over-reliance on jails for non-violent offenders who could be safely monitored and/or rehabilitated in a community-based setting.

“One of the areas we have found a need for additional community resources is for individuals with mental illness. For example, with this MacArthur grant, we’re taking a look at how we could better intervene with those individuals, possibly before they enter the system,” Potapenko said. “Additionally, we are working with the police department on opportunities to get community services as opposed to relying on the jail, or possibly doing additional screenings for individuals when they are in the jails to further determine need.”

It’s a big job, but Potapenko’s up for it. She’s also encouraging of other Women’s Studies majors, especially those who are wondering about their career prospects. “My advice would be to be creative with it, and never be afraid to reach out to other individuals to ask how they got where they are or ask for that mentorship,” she said. “Being able to connect with someone who can connect you to others – I think that’s one of the most rewarding pieces of the work that I’ve done, is be that connector.”