L&S / All News / Why does North Korea want nukes, and what can we do about it? 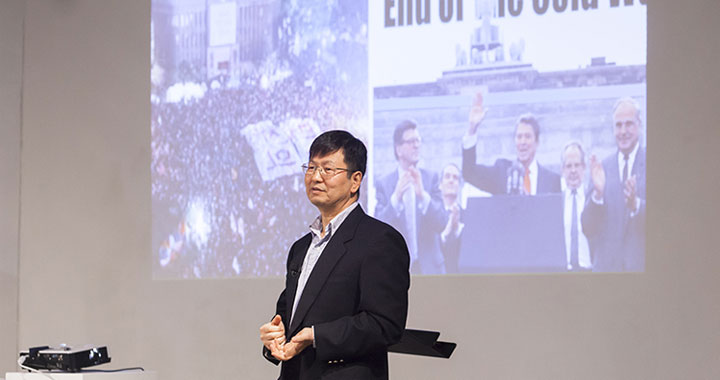 UWM Distinguished Professor of Political Science Uk Heo delivers his talk, “Why Does North Korea Want the Bomb?” to a packed room at the Kenilworth Square East Gallery on Feb. 12. (UWM Photo/Elora Hennessey)

The cough drops keep Heo’s vocal cords in shape. His painstaking research process and analytical skills do the rest of the work. He said he’s writing book No. 6 faster than he’s written anything in his 22-year career.

“If anything new happens on the Korean Peninsula while I am writing and my book is outdated, then it will not be meaningful,” Heo said. He strikes a calm, matter-of-fact tone whether he’s describing his writing process or authoritarian dictators like North Korea’s Kim Jong-un.

Politics on the Korean peninsula are keeping all the experts busy. In early March, North Korean dictator Kim Jong-un reportedly made an offer, relayed through the South Korean national security advisor, to have a meeting with U.S. President Donald Trump. He indicated that North Korea’s increasingly sophisticated nuclear weapons program would be “on the table” for discussion. (In September 2017, North Korea startled the world with an underground nuclear test so powerful it literally displaced a mountaintop.)

These would be the first talks between a sitting American president and leader of the Hermit Kingdom, a moniker North Korea has earned for its secrecy, rigid military dictatorship, and relative lack of industrial or technological development in many sectors. In late March, the world learned that Kim had secretly traveled to Beijing to meet with China’s leader – and that North Korea was evidently expanding its nuclear capabilities.

Heo says that if North Korea can develop a nuclearized missile reliably capable of reaching the mainland United States, “I would call it a game-changer.”

Like many in the foreign policy community, this political affairs expert isn’t sure when or if the Trump-Kim meeting will occur.

“I am not sure anyone can answer that question,” Heo said. “The outcome of Kim’s visit to China will have significant implications. If China sides with North Korea and reduces the pressure, a possibility due to the current trade war, Pyongyang is unlikely to meet Washington’s expectations, making the meeting less likely.”

Instead, Heo is looking to the past for insight into North Korea’s future.

Yet it’s difficult to see much of anything from North Korea’s perspective. The Kim family has retained firm control of the “Hermit Kingdom” for three generations, dating back to 1948. “There’s no human intelligence coming from North Korea,” Heo said. “It’s a completely controlled and closed society.”

Heo relies on history and political science theories to explain why the regime prioritizes missiles while its economy ranks somewhere near those of Azerbaijan and Andorra, and famine and drought plague many of its 25 million citizens.

Heo looks back to the Korean War, when Kim Jong-un’s grandfather, Kim Il-sung “almost lost his country” when U.N. troops advanced north to the Yalu River, which borders North Korea and China. The siren song of nuclear power, urged on by Joseph Stalin, became a kind of “regime insurance” for the Kim dynasty in its early days even after the U.N. and U.S. left North Korea.

Peninsular geography further complicates matters. Seoul, South Korea’s economic and population center, sits about 40 miles from the Korean Demilitarized Zone. If the north demonstrates a credible ability to strike the mainland U.S., Heo said, America has two possible paths: “To get seriously involved in the Korean Peninsula or to pull out.”

More than 28,000 American troops are stationed in South Korea today. If and when U.S. troops leave, a wealthy and democratic South Korea would be deeply vulnerable to monetary demands and military aggression from the north.

Heo hopes his book will offer policymakers a new way to view the unfolding crisis and propose non-military solutions. “I’m trying to learn from history, apply theories and come up with potential policy solutions. The U.S. could simultaneously sign intertwined treaties with North Korea, South Korea, Russia and China so none of them can use force against each other. Use that for a security guarantee, and then you talk about North Korean economic aid to dismantle North Korea’s nuclear program.”

He cautions that this can happen only after treaty members verify that North Korea’s nuclear program is completely dismantled. Trust is an issue between the U.S. and Pyongyang, and this is why any policy solution must be negotiated with participation from other world leaders. Trump’s recent decision to name John Bolton his new national security advisor only raises the temperature.

“Bolton’s appointment sends a signal to North Korea that Trump’s administration is different from previous ones. Trump is also implying that unless North Korea meets American demands, they may face use of force. So, he is increasing pressure.”

An international outlook defines Heo’s own “compatriotic” perspective. Born and raised in a South Korean military family: “I care about North Korean citizens and see them as fellow Koreans. They did not choose to be North Korean. They were born there and they are the ones paying the price.

“When you consider what the authoritarian regime does to its own people, it’s easy to imagine what they might do to others. That is why I agree with the view that North Korea is a prime enemy and security threat.”