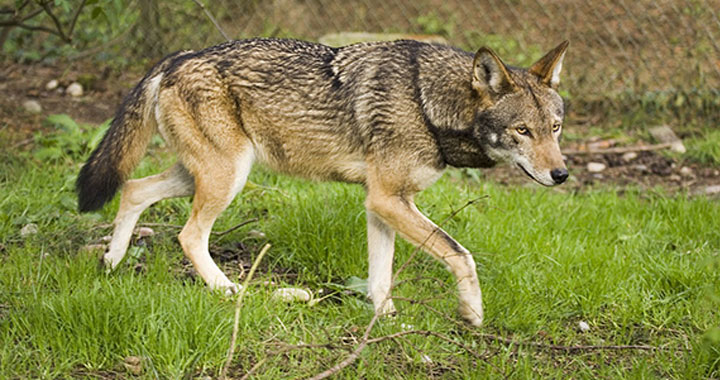 Red wolves are considered a distinct species of wolf and are currently protected under the Endangered Species Act. UWM biologist Emily Latch was asked to help with an independent assessment determining whether red wolves and Mexican gray wolves are correctly classified.

It’s right there in the name: The Endangered Species Act is meant to protect endangered species of animals.

“Or they have to be a sub-species, or for vertebrates, they can be a distinct population segment,” said UWM Biological Sciences associate professor Emily Latch. “It’s important to delineate taxonomic groups appropriately, because taxonomic classifications have important implications for conservation efforts and ESA protection.”

That means there could be high stakes for red wolves and Mexican gray wolves as the U.S. Fish and Wildlife Service conducts an assessment on the taxonomic status of each breed. Taxonomy refers to an animal’s classification – its genus, species, etc.

Currently, red wolves are classed as a separate species from the ubiquitous gray wolf that most people are familiar with. Mexican gray wolves are considered a sub-species of the gray wolf. As part of an appropriations bill passed earlier this year, Congress directed USFWS to determine if those designations are correct. The outcome could impact conservation efforts for each animal.

Congress directed the USFWS to conduct an independent assessment of each wolf, so the USFWS turned to the National Academy of Sciences, Engineering, and Medicine. The scientists convened an independent group of experts, including Latch, to give the Academy a crash course in wolf taxonomy. Because wolf conservation can be a controversial topic, each expert is a scientist who has a good understanding of genetics or animal behavior, but has not been previously involved in wolf conservation debates.

“We’ve presented information at a series of meetings and webinars. The webinars have been on topics like, ‘What constitutes a species or a sub-species?’” Latch said. “I talked about how hybridization occurs, how hybrids are maintained, and what approaches we might use to evaluate hybridization in species in the wild. Those are the sorts of things my lab does. We use genetic tools to help understand how animals use landscapes and how changes to those landscapes affect evolution.”

Most people are already familiar with hybridization, if only because they’ve seen purebred dogs versus mutts – hybrids between two or more breeds.

“But they’re all one species: Dogs,” Latch explained. “One of the purest definitions of a species is that they’re two things that don’t interbreed. So once they start to interbreed, it becomes challenging to determine what is a species.”

Hybrids are not afforded protection under the ESA.

She’s talking specifically about red wolves. Today, red wolves can only be found in a recovery area in eastern North Carolina. Red wolves frequently interbreed with coyotes and produce hybrid pups. Sometimes, hybrid offspring are sterile and cannot produce babies of its own, like with mules, hybrids between horses and donkeys. But red wolf x coyote hybrids are fertile, challenging managers to keep the populations from mixing and to remove hybrid pups from the wild. With only about 30 red wolves left in the wild, Latch said, it’s an ongoing struggle.

success, though it has been hard-won and recovery remains a challenge. At one point, the subspecies was extinct in the wild, and the initial captive population was started with just 5 wolves. Through careful breeding efforts, said Latch, the population began to grow and researchers began releasing wolves back into the environment. Today, there are 114 individual Mexican gray wolves in the wild in the US and a good captive breeding program, according to the Wolf Conservation Center.

The future of conservation efforts for both breeds is uncertain as the government debates their taxonomic status. Latch isn’t sure of her own opinion either – the fact that red wolves can hybridize with coyotes makes determining a designation tricky, and the evolutionary history of wolves is complex – but she’s enjoyed learning from her colleagues around the country as she’s listened to their webinars.

And if she was able to shed some light on hybridization, so much the better.

“I was honored to be able to help the National Academies with this difficult charge, and happy to apply my lab’s work and experience to a new and important conservation problem,” Latch said.