L&S / All News / The view from the bench: History alum lays down law 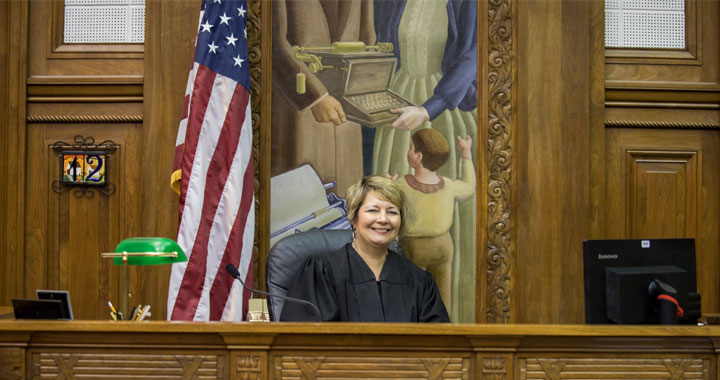 Go down to the courthouse and duck into Judge Janet Protasiewicz’s courtroom. You might find her overseeing a jury trial, setting someone’s bail, or hearing a plea from a defendant in a child neglect case.

“There is no greater honor, in my opinion, than to have this job where the public trusts you with making important decisions every single day,” she said. “I like these cases and I find them interesting. I hope I can help people, the victims and defendants alike.”

Judge Protasiewicz was elected to her seat on the Milwaukee County Circuit Court in 2014. Before that, you could still find her in the courtroom, arguing in front of the bench as a Milwaukee County Assistant District Attorney.

Before that, she was a history student at UWM.

Protasiewicz’s mother attended UWM to earn a Bachelor’s degree to augment her teaching career. As a child, Protasiewicz often accompanied her around campus, so UWM had always felt like home. She enjoyed her own time at college and loved history so much that she was set to pursue a Master’s degree after she graduated in 1985.

However, law seemed to be calling, and UWM gave her a good start.

“The liberal arts give you the evaluation and analysis abilities you need to be successful in law school. It makes you look at both sides of an issue and the history around it,” Protasiewicz said. 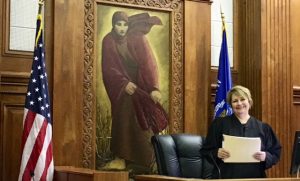 Protasiewicz encourages students interested in the court and legal system to contact her to observe courtroom proceedings for
a day. Photo courtesy of Janet Protasiewicz. Above photo by UWM/Derek Rickert.

Protasiewicz graduated in 1988 from Marquette University Law School and spent the next 26 years as a Milwaukee County ADA. She started out prosecuting domestic violence cases before she eventually wound up dealing with general felonies – anything from armed robberies to violent crimes.

“Some of those armed robbery cases, we had to work really hard. Like, a bank wouldn’t have a good video of a particular armed robbery. We would try (to find a video) at the gas station across the street to see if we can identify them,” Protasiewicz recalled. “There were many different ways to build a case and put it together.”

Eventually, she grew tired of arguing in front of judges and lobbying for decisions that she thought were appropriate. Wouldn’t it be nice, Protasiewicz thought, to be able to make those decisions herself?

With that thought, she ran for Circuit Court in 2013. The race was politically charged; her opponent was governor-appointed Judge Rebecca Bradley, and Protasiewicz lost by a slim margin. The next year she ran unopposed, and is now serving a six-year term that will end in 2020.

Sitting on the bench gave Protasiewicz a new perspective on court proceedings.

“You go from being an advocate to a magistrate. Any time I sentence anybody, I look at a number of factors: how serious the crime is, the need to protect the public, and what I know about the character of the person I’m sentencing,” she said. “You have a lot of discretion to do what you think is right.”

Protasiewicz does get her share of dangerous defendants, but she often sees defendants whose circumstances who need assistance more than punishment.

Those are the cases that reveal what she sees as the strengths and weaknesses of the justice system. The courts have many helpful programs in place – drug treatment courts, for example – to help offenders become more productive members of society. Unfortunately, there aren’t enough resources to serve everyone’s needs.

Protasiewicz particularly remembers a mother charged with child neglect who had not completed her court-ordered programming. She had been evicted because of her conviction and worked two jobs to cover the cost of her hotel room, leaving her no time for classes. There were few community resources to help her find affordable housing.

“People have some serious challenges that I think it’s important that we stay aware of,” Protasiewicz said, but, “You have to take yourself out of the advocate role and be a neutral magistrate, listening to both sides and drawing your conclusions, judging as though you have no horse in the race.”

After her term is over, Protasiewicz has a few options. She loves her job, but her dream is to one day run for Congress. If the circumstances are right in a few years, she said, she’ll consider running. Until then, you’ll find her down in the county courthouse.