L&S / All News / UWM students learn the business behind journalism 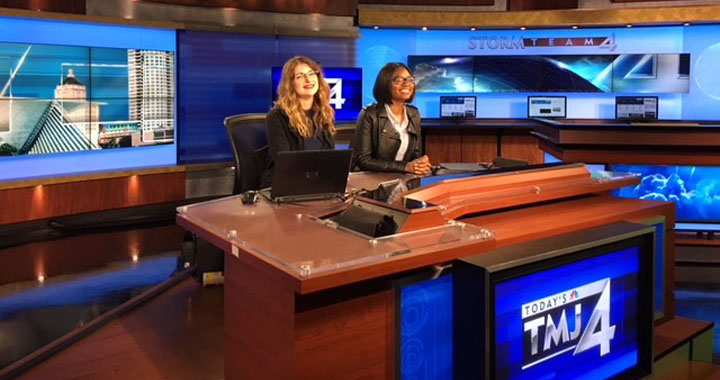 This story is reprinted with permission and originally appeared on RTDNA.org at https://bit.ly/2MWAmKd.

Graduating journalists across the country are scrambling, competing for that first job opportunity. Most are armed with fresh résumés and YouTube or web links directing future employers to their limited work. They have likely interned with some kind of news organization, but still have limited exposure to newsrooms and the business side of news.

You do not have to look far for a headline about media mergers, dropping revenues and in some cases corporate-dictated content. Graduating students may know about newsgathering, but what do they know about the news business as a whole?

UWM journalism instructor Jessie Garcia Marble saw an opportunity. She wanted to give students an eyes-wide-open approach to the journalism business.

“I consider this a master class in television operations. Some universities have TV studios; UWM does not, but even if they did, I feel this takes learning to a new level because you are hearing directly from professionals each week and observing all facets of a real station,” Garcia Marble says. She partnered with WTMJ-TV, the local E. W. Scripps station, for the 2017 and 2018 spring sessions.

During the semester, her journalism class, “The Making of Television News,” ditches the traditional campus classroom to meet in WTMJ’s conference room. The class meets once per week for two hours.

“In order to really show them how a television operation works, we felt we needed to be in the building. There would be no way to schedule our guest speakers by remaining on campus. Plus, we are able to have them watch live newscasts, observe every technical aspect from the control room and beyond, and put what they learn into practice.”

Why it works for students

Each week a different department head gives a presentation to students about their area of expertise, leaving time for Q & A. Students have called it “a second internship,” “an invaluable experience” and critical for their careers.

Guests often come with handouts, PowerPoints and examples of their work, but most importantly, the speakers come armed with real-life experiences. Students learn about budgeting, revenue, programming, sales, promotions, graphics, engineering and all facets of news production and on-air/online presentation.

Homework coincides with that week’s speaker. For example, if the promotions department explains how they write a promo, students will be tasked with writing a successful promo for a different, real-life story.

Students are graded on attendance, punctuality and class participation, as well as weekly homework assignments and a final paper summarizing what they learned each week.

“We have run the class twice now and tweaked it to include even more hands-on learning. On the week that MMJs (multi-media journalists) and photographers presented, for example, students had to shoot, write and edit an entire story as an MMJ, including a creative MMJ standup,” says Garcia Marble.

Students comment nearly weekly about how they learned new things about television that they never knew, and how the experience has opened their eyes to the possibility of different avenues in TV. Some who thought they only wanted to be on air discovered producing, marketing or sales, and many followed up with emails to the presenters asking to learn more.

How it works for the station

Garcia Marble works with WTMJ-TV’s Production Supervisor, Ryan Scott, to create the class, which is only offered during the spring semester each year so as not to overburden the station. The two sit down a few months before the semester starts to map out what areas they think would be valuable to the students. Scott then sets the schedule with all needed parties so they know well ahead of time when they’re due to speak to the students – and the time spent by presenters counts as Employee Engagement Opportunities benefitting the community. Garcia Marble plans homework assignments with input from Scott and presenters.

The class is deliberately timed to run from 11:15 a.m.-1:15 p.m. so that students can be there over the noon newscast. The only times that changes is when the class watches “The Morning Blend,” an advertiser content driven show, which runs from 9-10 a.m., and during Engineering and Production week.

During Engineering and Production week, the class conducts two mock newscasts after the station’s noon newscast. Students are randomly assigned duties ranging from anchor to prompter to live trucks. They work alongside a professional to perform their duties, using a segment from a previous day’s show as the script.

Working with an active newsroom does come with uncertainty. Everything in the class is subject to speakers’ availability that could be changed or canceled due to breaking news. However, the class roster has been full with a waiting list each time.