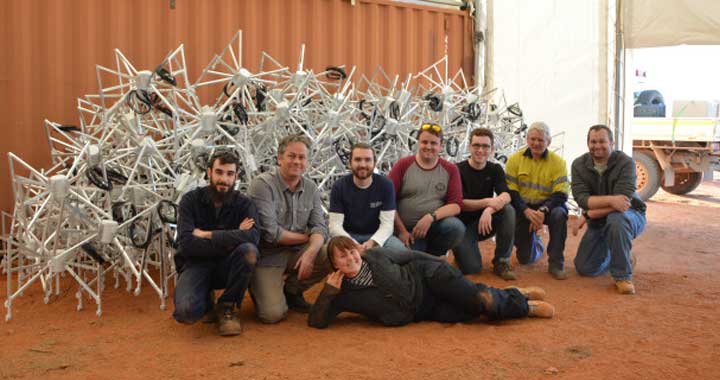 In the Australian outback sits a forest of spider-like antennas, gathering data from the distant reaches of the universe. It’s the Murchison Widefield Array, a radio telescope array that uses low-frequency radio waves to detect and study things like hydrogen emissions, the ionosphere, supernovae, and more.

Physics majors Rusty Mundorf, Kaleb Maraccini, William Fiore and Robert Bavisotto are all undergraduate researchers who work with UWM Physics professor David Kaplan. When Kaplan needed a crew to work on expanding the MWA, they each applied.

“We were responsible for the hex, which is a section of the telescope,” Mundorf explained. “We built 576 of those little antennas and went and put them out on the field and wired them so they could be hooked up to the computers for analysis.”

It’s a small thing now, but it could generate big results later. The MWA is an international collaboration among several universities and organizations, each studying different astronomical phenomena. Kaplan’s group at UWM uses the data collected from the array and other locations to search for pulsars. 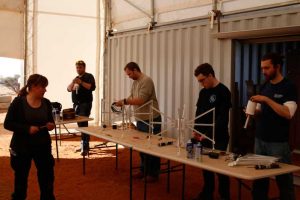 “Pulsars are rapidly spinning neutron stars (leftovers from supernova explosions) which emit radio waves from their poles, creating a lighthouse effect whereby if the Earth is in the path of the pulsar’s beam of radiation, we see a “pulse” of radio waves,” Fiore said. “Pulsars are the densest objects in the universe apart from black holes, and are typically about the size of Milwaukee.”

Sometime in the future, the MWA, and the antennas built by the UWM students, might be able to use the pulsars to detect gravitational waves, ripples in the fabric of space-time predicted by Albert Einstein and recently proved to exist by a team from the Laser Interferometer Gravitational-Wave Observatory (LIGO), which included scientists from UWM.

“The LIGO announcement was really exciting. That was really cool thinking about all of the years that went into that project,” Maraccini said. “When NANOGrav (the organization Kaplan belongs to searching for pulsars) discovers gravitational waves, it’ll be really cool to be a part of that.”

“It’s always interesting to see the practical side of science, and there is a sense of pride in seeing something that you’ve built after a week of work, knowing that someone will use it to study something meaningful in the future,” Fiore added.

The students spent five days on the project in the Outback. The area around the MWA is a “radio quiet” area, meaning all radio transmissions, from car radios to microwaves to cellphone signals, must be silenced so they don’t interfere with the MWA’s data collection. The area itself is isolated and can only be reached via a long ride on dirt roads.

The work was repetitive, so much so that Mundorf bragged he could assemble a dipole antenna blindfolded by the end of it. He couldn’t, but did come close, he reported with a laugh. The students would be working on-site by 7:30 in the morning and work until about 4 or 4:30 p.m.

“For me, it was really fun, and really cool, learning more about how the MWA works,” said Maraccini. “I was taken aback by all the logistics of working on telescopes like these.”

The MWA involves miles of wire to carry data back to computers for analysis, and the instruments are very sensitive. That’s good for research but can be a problem when it comes to maintenance. Maraccini learned how the iron in Australian soil can corrode the array, especially during a wet season.

After the project ended, Fiore and Maraccini stayed behind in Australia for more research while Mundorf and Bavisotto returned to the United States. The project was a cool opportunity for research, and one that will look great on a resume, Maraccini said.

“I want to go to graduate school and get into research,” he added. “This is a great place to start.”