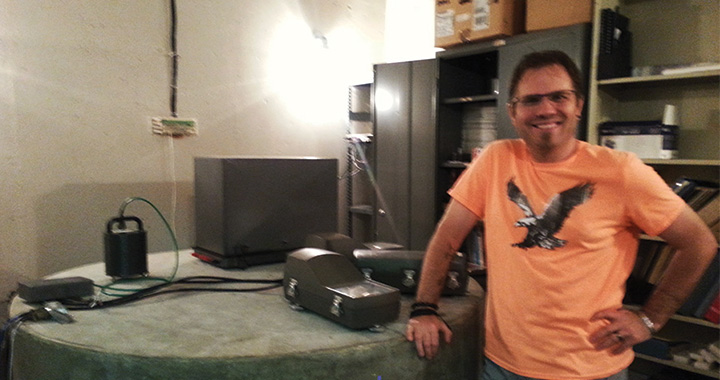 On June 14 at 2 a.m. central time, a 6.9-magnitude earthquake rocked the small Central American country of Guatemala. Over 2,700 miles away, the UWM Seismology Center registered the shaking.

The Seismology Center is literally a hidden gem on the UWM campus, tucked away in a vault beneath Lapham Hall. Surrounded by thick layers of concrete to isolate the sensitive equipment from the traffic of a bustling city, the Center boasts a seismometer sensitive enough to detect vibrations on the order of microns – movements in the earth thinner than a sheet of paper. The equipment constantly feeds data computers that show, 24/7, exactly what is going on beneath our feet.

The Center marks its 45th year on the UWM campus this fall. For the past 16 years, it’s been Brett Ketter’s domain. A senior information processing consultant in the Geosciences Department, and a UWM Geosciences alum, Ketter monitors and maintains the Center’s equipment, recording each time an earthquake occurs. Depending on its strength, he’s picked up quakes from the other side of the world.

“I think the record is about 11,999 miles away. So literally, the absolutely opposite end of the world from where we are,” Ketter said.

The seismic vault beneath Lapham Hall is cool and quiet. In its center stands a huge concrete pillar that descends 25 feet beneath the ground. Scattered around are relics of seismology past – analog machines that use old-fashioned ink and paper to record vibrations in the earth. Those have been made obsolete by digital detectors that relay second-by-second data to Ketter’s computer.

The digital reader that rests atop the pillar is also connected to a GPS unit that uses satellite data to constantly check the time. By measure how quickly vibrations are traveling through the earth, Ketter can determine where an earthquake originated and how strong it was. 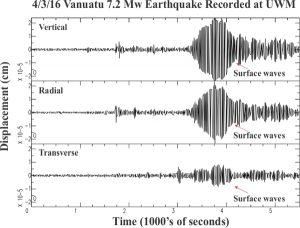 The image above describes a recent earthquake
in the Vanuatu Islands recorded at UWM. Read more on the
recent findings of UWM’s Seismology Center here. http://bit.ly/2utKwco

Earthquakes can occur along any crack in the earth’s tectonic plates – not just at the boundaries where plates meet. That’s why even the Midwest, which is nowhere near any plate boundaries, can occasionally get earthquakes, though they’re rare. The last earthquake to shake Milwaukee occurred in 1947.

“Some of the stuff we get here in the upper Midwest might be associated with what we call ‘glacial rebound,’” Ketter said. “Ten thousand years ago, you had this massive amount of ice miles thick covering this entire region. You take away all of that weight and then the earth slowly comes back up. When it does that, there are all these creaks and groans.”

Despite the sophisticated detection equipment, there’s no way to predict when and where an earthquake will occur. The only thing scientists can do it measure it afterward – but there’s a wealth of knowledge in those measurements.

The UWM Seismology Center may be small, but every bit of data that it picks up is added to the files in the National Earthquake Information Center, a national repository of earthquake data in Colorado.

“The seismologists are interested in this neck of the woods because we are so far from earthquakes,” Ketter said. “They’re interested in how the energy travels under areas that aren’t affected so much by earthquakes. The reason being is that geophysics is the one way we have to look at the inside of the earth without actually having to go there. By having all of this information as to how earthquakes travel under this neck of the woods, it gives us a better picture of what’s going on.”

Most of the eastern United States, including Wisconsin, lies on a bedrock foundation that transfers seismic energy with very little impediment. When there’s an earthquake in the east, the seismic waves can travel for, and be felt, for hundreds of miles. Compare that to a region like Los Angeles, which lies in a geologic basin. The unconsolidated sediments beneath the city act like a big bowl of Jell-O, shaking and vibrating in a constrained space.

By analyzing and comparing earthquake data from across the country, scientists gain a better understanding of the composition of the earth and how it’s constantly changing.

“That’s the ultimate goal for having these massive data sets,” Ketter said. “They use what’s called ‘tomography’ – the same sort of thing as an MRI. They take all of this data and create this 3-dimensional picture of what’s inside the earth. We play a small part of that, along with thousands of other seismic stations around the world.”

American Indian studies grad sees a responsibility to others