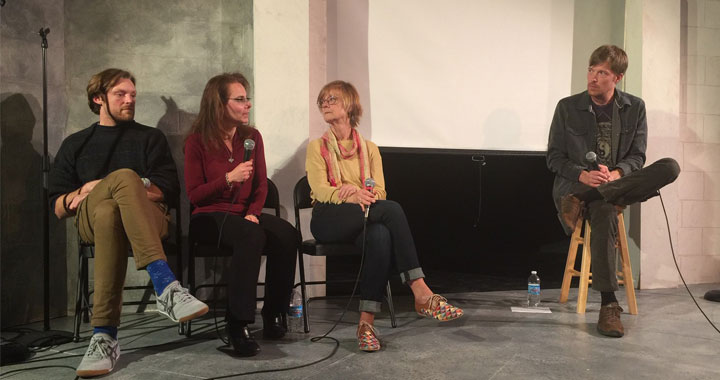 A historian, a psychologist, and a comedian walk into a comedy club.

And boy, did they deliver.

“It sold out days in advance. It was a huge success. I thought everyone had a great time,” Mauss said.

Mauss is a Wisconsin native who has found great success as a comic, appearing multiple times as a guest of Conan O’Brien and Jimmy Kimmel, and on “Showtime,” and “Comedy Central ‘Presents.’” He’s also the host of his own podcast, called “Here We Are” (www.herewearepodcast.com) where he interviews scientists about everything from consumer behavior to the meaning of life.

Comedy and science might seem light-years apart, but Mauss is fascinated by science and has built a network of scientist acquaintances to appear on his podcast. Stand Up Science was another way to marry his two loves.

“I’ve always liked the TED Talk type of formula, and I wanted to give academics a space to talk a little more about the things they’re most interested in,” Mauss said. “And I wanted a place to share some of my more thought-provoking ideas and not have to pander to the lowest denominator to get through a show. That’s how the idea of Stand Up Science came about.”

Milwaukee was Mauss’ third test market out of eight for the experimental format. Shows are 90 minutes long and feature a stand-up routine sandwiched between two presentations from scientists.

Mauss reached out to Wiesner-Hanks and Frick after seeing examples of their work on YouTube and the UWM website and asked them to be a part of the show. Comedy, they said, is definitely not in their wheelhouse, but both were intrigued by Mauss’ invitation.

“I’ve often said, if this teaching gig didn’t work out – which it did, so I didn’t have to worry about it – what I could do with the least amount of retraining is stand-up,” Wiesner-Hanks joked. “I teach up to 200 students at times. So it’s stand-up. You’ve got to gauge your audience, you’ve got to tell occasional jokes, you’ve got to know what’s going on and what the Packers did yesterday. It’s a little bit like that.”

She started her presentation with the question, ‘Is history a science?’ and took audiences on a journey through world history, pointing out the big patterns that stretch across centuries. Frick talked about her work research Alzheimer’s Disease – what it is, its symptoms, and why it affects women more frequently than men.

“It was different being in a comedy club atmosphere. It was very casual and welcoming, but I just didn’t know what kind of reaction to expect from the audience,” Frick said. “They’re coming for a comedy show and I’m going to be talking about Alzheimer’s Disease, which is a little bit of a downer.”

Downer or not, the audience enjoyed the show; the crowd stayed after for a Q&A session and peppered both professors with questions about their work.

“It may have inspired people to read something or go to a museum, or just to think about history in a different way,” Wiesner-Hanks said. “That would be great.”

She and Frick enjoyed connecting with the Milwaukee community in a new way.

“People don’t have a good sense that research is happening here. … But (our research) is exciting; it’s federally-funded, and it’s really important,” Frick said. “It was a great opportunity for Merry and I to be able to go out into the community and reach even a relatively small group of people to say, yeah, cool stuff is going on here.”

Stand Up Science has left the city, but Mauss, encouraged by the success of the show’s test run, plans to embark on a national tour and he might just be planning another stop in Milwaukee. Mauss himself will be back in the city for a New Year’s Eve show featuring some science and philosophy, all about humanity’s search for meaning in life. Visit https://bit.ly/2DCfPZh for details.