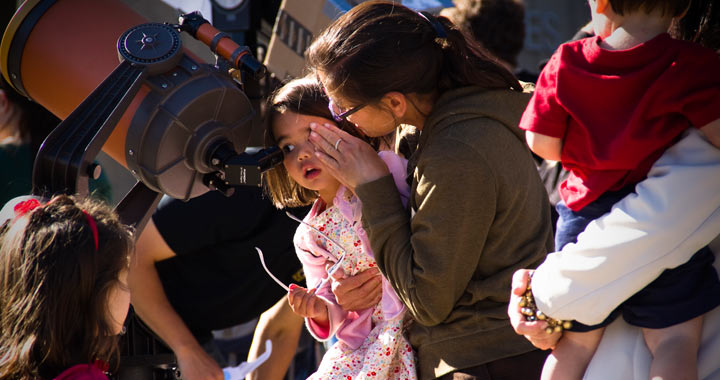 In the last 50 years, NASA put a man on the moon. Sally Ride became the first American woman in space. The Mars Curiosity rover began transmitting images of the Martian surface, and this past summer, New Horizons flew by Pluto, one of the furthest-flung bodies in the solar system.

The UWM Planetarium was there for it all.

The Manfred Olson Planetarium marks its 50th anniversary in 2016 with celebrations throughout the year highlighting its role on the UWM campus and in the Milwaukee community. Anniversary events, in addition to regular Friday night shows, AstroBreaks, and outdoor stargazing, include a Valentine’s Day show, a gala dinner in April, and a t-shirt tie-dying afternoon in August.

“I like to think that the Planetarium is a place that people can come and enjoy the beauty of the night sky, but also learn something about the cosmos, ” said UWM Planetarium Director Jean Creighton. “The goal is to try and get something for everyone that is interesting enough, exciting enough, and yet include some substance, to attract a very broad audience. I don’t think we have enough of that, especially in the sciences.”

Creighton was appointed director nine years ago and has spent her time making the Planetarium an integral part of life in Milwaukee. Since she’s taken over, the Planetarium’s yearly attendance has increased to 10 thousand visitors a year between school groups, UWM-exclusive shows, and the Friday-night shows open to the public.

She’s been doing it all with the Planetarium’s original equipment – a 50-year-old Spitz AP3 projector, which was supposed to have had a lifespan of just 15 years.

“Clearly they don’t make them like they used to,” Creighton joked.

Creighton’s hoping to use the 50th anniversary as a fundraising opportunity to have a contingency fund should something happen to the projector, and also buy digital software that will simulate space flight so audiences can be even more immersed in the shows.

Those shows have become quite popular over the years. Creighton and her student workers host five throughout the year, open to the public on Friday nights for just $3. Topics range from the northern lights to Greek mythology in constellations to Einstein’s last prediction, and she wants to see those shows grow.

“I love the idea of keeping the Planetarium inexpensive. … However, it’s that balance of ensuring that the programs are accessible to everyone while still giving the hours that my students would like and I think they should have,” Creighton said. “There’s always the issue of how to keep attracting and reaching new audiences. You can never rest on your laurels.”

Her efforts are, in a large part, supplemented by student workers. Creighton hires student designers and marketing assistants to help her plan and advertise the shows. Not only does it keep the Planetarium running smoothly, but it also gives undergraduate students production and design experience they take with them into the job market.

Creighton’s also partnered with several units across campus to bring more diversity to the Planetarium shows. For example, she’s working with the Center for Latin American and Caribbean Studies to do a “A Night under the Caribbean Sky” show featuring stars of the tropics alongside percussion music and dancing as part of the 50th anniversary celebrations. She also is collaborating with the UWM Theatre professor Robin Mello to develop and teach a storytelling course “Tale of Scale” asking students to convey the size of the universe to an audience.

“It’s kind of an unlikely collaboration – physics and astronomy and theater don’t normally go together. It’s been nice to work with someone who is so open to that kind of learning,” Creighton said.

In addition to collaborating across the colleges, Creighton hopes to have the Planetarium become even more of a fixture in the community – her goal is 20,000 visitors a year by 2022. She has a solid foundation; the Planetarium regularly hosts birthday parties and scouting events, making it a popular place for kids and adults. It’s even been the site of a proposal or two.

“One of those times, I think he was so confident that this was going to be a yes that he asked me to make favors for the audience. They were given a free ticket to the next production,” Creighton said. “She said yes. I thought that was really sweet.”

For a complete list of 50th anniversary events, visit https://uwm.edu/planetarium.