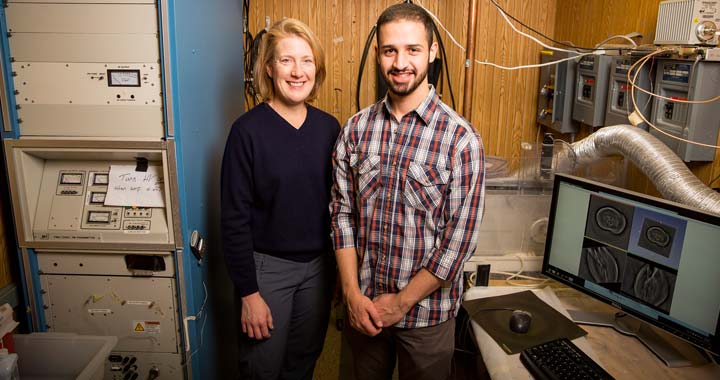 The science of cancer diagnosis has come a long way. Exploratory surgery has been mostly replaced with noninvasive diagnostic imaging to detect cancerous growths.

UWM Physics Professor Sarah Patch is working on developing the next generation of those diagnostic tools: thermoacoustic imaging.

“I intentionally heat up an object a little bit, and it wants to expand because it’s heating up, so it generates an outgoing pressure pulse. We measure those pressure pulses with ultrasound receivers,” Patch explained.

“A few years ago we landed a grant through UWM’s instrumentation award program to purchase a research-friendly ultrasound system. Now I can use a transducer just like those used in hospitals to ‘listen’ for the signal.”

Patch is using the technology to create 3D images of prostates in hopes of creating a diagnostic tool for detecting prostate cancer – one without the risks associated with biopsies. She started the process by imaging cancerous prostates immediately after they were removed from patients undergoing treatment at Froedtert and the Medical College of Wisconsin.
“Lots of folks at MCW have been very supportive of this project, from Dr. See in urology, to the MCW Tissue Bank and MCW’s Clinical & Translational Science Institute,” she said.

If thermoacoustic imaging proves as effective as more costly techniques, Patch hopes to image prostates while still inside the patient. The process would be similar to the current transrectal biopsy used now for diagnosing tumors.

“We are currently looking for surgeons in town to help us move to the next level. To drum up funds to build a prototype, we’ll need to have surgeons on board who will commit to sending patients to our system for thermoacoustic imaging at the time of biopsy,” Patch said.

Longer term, she hopes to image other abdominal organs, like the liver and pancreas.

Thermoacoustic imaging may do more than just detect cancer, however: It could also be an instrument for treating it.

Proton therapy is a method of cancer treatment in which doctors direct a beam of charged particles at a tumor. Unlike regular radiation treatments where x-rays enter the body and attenuate exponentially, particle beams deposit most of their energy at a certain point, known as the Bragg peak, and then die away almost completely. In principle, treatment can be localized on the tumor, leaving the healthy tissue beyond the Bragg peak untouched. Positioning errors, however, result in treating healthy tissue and under-treating the tumor.

Detecting thermoacoustic emissions from the Bragg peak is a new project for Patch and scientists working on the Lawrence Berkeley National Lab’s (LBNL) 88-inch cyclotron, which accelerates protons to approximately one-third the speed of light. This summer, Patch went back to Berkeley to test her newest ultrasound equipment with an upgraded cyclotron.

“LBNL donated a day’s worth of time of on the cyclotron. We did some experiments and it worked better than I thought it would,” Patch said. LBNL also provided staff support, including technicians who modified electronics, one scientist coaxed out of retirement, and operators who controlled the beam.

Their experiment involved pulsing a proton beam at a “phantom,” a model of human tissue that can be used for ultrasound. They designed a phantom with a cavity that mimicked a portion of the intestine, because gas pockets wreak havoc with treatment plans. Scientists George Noid and Allen Li at MCW took CT scans of the phantom, from which Patch could estimate the Bragg peak locations when the cavity was empty and filled with olive oil.

“The beam could penetrate 2 centimeters in the oil, but when the cavity is empty, the beam flies right through and doesn’t slow until it enters phantom material. With my ultrasound transducers, we can see that difference pretty accurately,” Patch said.

Patch warns that her initial results are preliminary. However, if she and collaborators continue to obtain positive results, Patch thinks thermoacoustics may improve the accuracy of proton therapy.