UWM opens the doors of its newest building 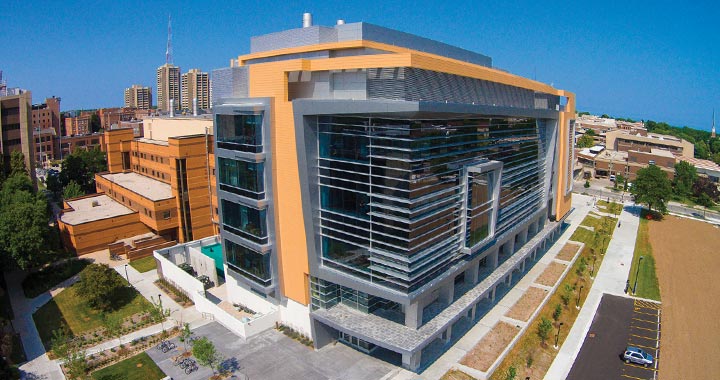 KIRC at a Glance

The Kenwood Interdisciplinary Research Complex is a beautiful place to make world-changing discoveries.

The complex, known as the KIRC, will be dedicated Friday, October 2, 2015. Designed to foster innovation, it is expected to become a center for world-class research and a guiding force in Wisconsin industry.

“The Kenwood IRC is a landmark project for UWM – and the first new all-academic building on our East Side campus since 1995 when Lubar Hall was constructed. It significantly advances our abilities in the areas of scientific creative collaboration, ingenious partnership, and critical thinking through research and innovation,” Chancellor Mark Mone said. “I am humbled by the generosity and the diligent efforts that so many with ties to UWM have put forth to officially open its doors.”

Primarily home to the physics department, KIRC also houses researchers from the Joseph J. Zilber School of Public Health, and the Shimadzu Laboratory for Advanced Applied and Analytical Chemistry, which is used by many different research group.

With support from the Energy and Defense Departments and the National Science Foundation, physicists on the third floor grow unique crystals in an effort to uncover the secrets of new states of matter. The materials have properties that will revolutionize the production of batteries, data storage devices and superconductors. Unlike copper and other traditional conductors, superconductors can carry electrical currents indefinitely without losing energy.

Meanwhile, researchers in the Leonard E. Parker Center for Gravitation, Cosmology, and Astrophysics on the fourth floor are exploring the bounds of space by searching for gravitational waves, elusive ripples in the fabric of space and time that Albert Einstein predicted almost a century ago.

One floor up, professors and students in the Joseph J. Zilber School of Public Health delve into environmental health sciences, examining the biological and ecological impact of contaminants in air and water.

The space on these floors is designed to foster the interdisciplinary teamwork needed to address complex scientific questions. Open areas and nooks where faculty and students can meet or study encourage constant interaction, while the positioning of labs eases the transfer of samples between researchers.

“Modern research demands collaboration between disciplines – biologists working with physicists working with engineers working with chemists and so on,” said Rodney Swain, dean of the College of Letters and Science. “Our new building supports this type of essential collaboration, giving UWM researchers, students, and members of the research community at large access to the latest equipment and space to work together to find answers to important questions.”

KIRC’s modern equipment gives scientists the means to advance research in drug discovery, biomedical imaging, astrophysics and new material development. Electron microscopes with high resolution down to the atomic level aid in the study of matter’s electronic and structural properties, leading to new knowledge and potentially new materials that could be used in the energy or technology sectors.

The High Performance Computing Data Center contains a collection of computers working together to deliver exponentially greater performance power than any single server could. The HPC cluster, known as Mortimer, processes data for areas such as the digital humanities and bioinformatics in ways that were previously impossible.

Other equipment includes multiple mass spectrometers, which use electric and magnetic fields to measure the mass of charged particles; fluorescent microscopes; and chromatography systems that use gas or liquid to separate chemical compounds.

“It’s really a great advantage to us as students to have access to these different instruments because we can get a variety of research experiences that we haven’t before,” said Margaret Guthrie, who is in her third year of graduate work in chemistry. Guthrie spends much of her time in the Shimadzu Laboratory, working with Assistant Professor Alexander Arnold and the Milwaukee Institute for Drug Discovery on a study that could lead a pill to treat asthma.

An engine for economic development

Several researchers at KIRC work under the umbrella of the Science and Technology Center, a group funded by one of the National Science Foundation’s most prestigious awards. They use powerful lasers and advanced microscopes to study the structure of proteins and viruses and how they work within the human body.

Physics Professor Valerica Raicu built his own equipment, piecing together different lasers, microscopes, and computers so the team of biologists and biophysicists could study “in vivo” cells. Medical imaging has traditionally relied on “in vitro” cells, samples that are only partially intact or dead. Raicu’s system can look at “in vivo” cells, which are still alive and interacting with their surroundings. The ability to compare living and dead cells provides opportunities for novel interdisciplinary work in medicine and environmental science.

Raicu founded Aurora Spectral Technologies, which packages the technology with a user-friendly interface for use by others.

“Federal dollars like the National Science Foundation’s grant for the Science Technology Center directly lead to economic activity in our community,” Swain said. “They generate new innovation and new jobs.”

The Small Business Collaboratory, funded by two National Science Foundation grants, has a multiphoton microscope that allows researchers to create 3-D images of miniscule organisms and structures like proteins, tissue and antibodies. The lab is available to businesses, start-ups and researchers worldwide who would not otherwise have access to that type of equipment.

The Leonard E. Parker Center, founded with a generous donation by Drs. Isabel and Alfred Bader, allows members of the public to help in the search for gravitational waves. A program called Einstein@Home has volunteers all over the world using their computer’s idle time to collect weak astrophysical signals from spinning neutron stars, often called pulsars. These volunteers have already discovered about 50 new neutron stars.

“There is so much going on in KIRC — from the Zilber School of Public Health’s work identifying the impact of the chemicals in our environment on pregnancy, to the search for information on the formation of black holes, to the advances in new materials that might lead to better batteries, smarter computers and superconducting materials. I have no doubt that KIRC will attract new talent to the university and the city itself,” Swain said. “We’ve heard so much about ‘brain-drain’ in our state; this building will serve as a resource for ‘brain-gain.’ It will attract students and researchers from around the country and the world.”

Math and science come together for Diabetes research

A Philosophy professor asks, do you want to live forever?