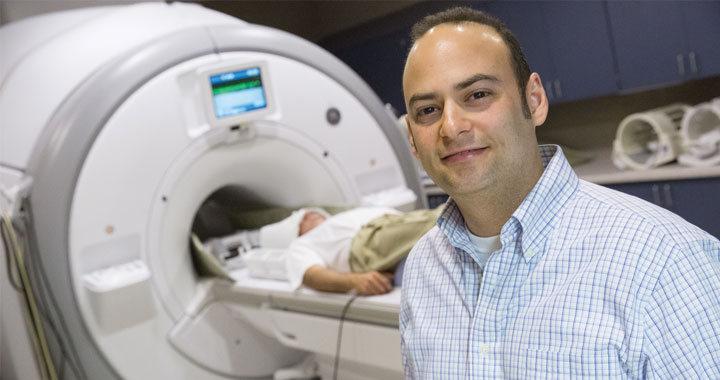 UWM neuroscientist Adam Greenberg was recently awarded a grant that will allow him to study the effects of, and possible treatments for, “chemobrain,” cognitive impairment that is sometimes a side effect of the most common treatment for cancer.

Cancer can be a devastating diagnosis and to add insult to injury, one of the most common treatments, chemotherapy, comes with a host of nasty side-effects. One of those is post-chemotherapy cognitive impairment, known colloquially as “chemobrain.”

Common symptoms include problems with motor control, memory, and attention. About half of all patients who undergo chemotherapy will experience chemobrain symptoms.

One UWM neuroscientist is hoping to help with that.

UWM Psychology professor Adam Greenberg and his lab have received a three-year grant from the Greater Milwaukee Foundation to study chemobrain, paying close attention to who it affects and how severely. Working with the Medical College of Wisconsin and recruiting cancer patients from Froedtert hospital, Greenberg hopes that he’ll be able to shed some light on what has, so far, been a poorly studied side effect of chemotherapy.

“Only in the last 12 to 18 months has the field turned its efforts toward funding research to try and understand what chemobrain is, and then ultimately see if we can find ways to get around this problem and get people a better quality of life after they finish treatment,” Greenberg said.

Greenberg’s research is two-fold. The first step is an experiment to gain a better understanding of what chemobrain actually is and how it affects patients. To that end, Greenberg is conducting a longitudinal study by recruiting people who have just received a cancer diagnosis to undergo a range of behavioral and neuropsychological tests before they begin chemotherapy – what he calls Time Point 1 – and then repeat the tests three to six months later, after their treatment is complete, at Time Point 2.

The tests measure patients’ focus and timing, and can measure how quickly a patient responds to visual and sound stimuli before their treatment, compared to after treatment.

This is one of the first times a study of this type has been conducted, Greenberg added.

The second part of Greenberg’s research adds another component. This time, when he administers behavioral tests before chemotherapy begins, he’ll also ask patients to sit for an MRI scan.

“We’re going to try and understand whether any of these metrics that we can find that are predictive of the symptoms or the severity of the symptoms also have a neural correlate,” Greenberg said. “Are there biological differences that we can find in someone’s brain? … Does that tell us something about whether they will be affected by the chemotherapy and what symptoms they might have?”

Though there is very little research into chemobrain, what research has been done shows that its symptoms can last for years, even after a patient is declared cancer free. It’s a grim reminder of a traumatic disease that can affect a person’s work performance and social life, even up to five years after treatment has ended.

That’s one reason Greenberg is hopeful that his research can be used to predict who might be at risk for developing chemobrain.

“The pie-in-the-sky ideal is that we’ve collected enough data to not just better understand what chemobrain is – can we make a better definition of chemobrain for physicians to use?” he said. “The second hope is to inform the scientific and medical community about what types of patients would be more susceptible to chemobrain symptoms (so) that physicians can inform patients about the potential for these symptoms and give them an opportunity to reduce the impact of those symptoms long-term.”

That might mean that a physician can prescribe his or her patient mental exercises or brain training games to reduce the impact chemobrain might have on their short-term memory, or there might be drugs that can help a patient maintain their motor
abilities.

“If we can help to make those chemobrain symptoms go away quicker or have them not be present at all, I think it will help people get back to their normal lives quicker,” Greenberg said.