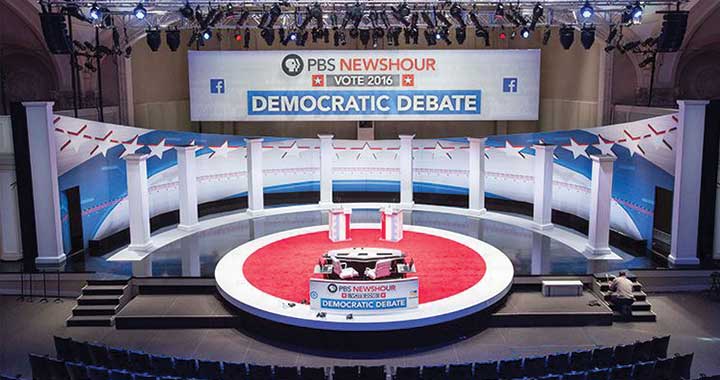 Eyes across the nation turned toward UWM on Feb. 11 as candidates for the Democratic presidential nomination Bernie Sanders and Hillary Clinton took to the stage in the UWM Zelazo Center for the latest in a series of debates outlining their policies and political agendas. UWM professors gave some insight into the political process.

Political scientist Thomas Holbrook has been studying presidential campaigns and voter behavior for more than 25 years. His forthcoming book, “Altered States: Changing Populations, Changing Parties, and the Transformation of the American Political Landscape” (Oxford University Press), looks at how voting patterns have changed from state to state. His research interests are rooted in understanding how factors such as the national economy influence election results.

Is this election particularly challenging in terms of your work in forecasting?

The Republican field is so different from what we’ve seen before, both in terms of numbers and the type of candidates.

For one thing, it’s simply harder to poll. Moreover, two of the candidates, Donald Trump and Ben Carson, haven’t run for office before.

The Democratic side is fairly standard – a conventional candidate with a challenger who’s significantly farther to the left. So that’s easier to think about than the Republican side.

Do you see any departures from how candidates have campaigned in the past?

One big difference is that Donald Trump has hardly done any advertising at all. He hasn’t had to, he’s got the media advertising.

But in terms of what’s happening under the hood, most campaigns are continuing the trend of micro-targeting, using big data to try to find voters, match them with candidates, assess the probability of turnout.

I think a big change is that parties have started to realize that advertising is fine, but you really have to get voters out, and you have to get your voters out. In recent years, voter turnout has gone up. Some may say that it’s due to increased polarization, but I suspect this emphasis on mobilization.

Your recent work has been a state-by-state inquiry into changing voting patterns.

Nevada than there used to be.

But the thesis I’m pursuing is that – using Nevada as an example – it’s not just that there are more Latinos, but being Latino now matters more than it used to. In other words, Latinos have become more likely to vote Democratic, so you wouldn’t need more Latinos to have the observed change.

Another example – increases in religiosity don’t seem to have been significant, but religiosity itself matters a lot. States that have greater concentrations of religious congregations have become more Republican, though the number of congregations hasn’t necessarily changed.

What that means is that the relationships between demographics and voting patterns have intensified in some cases, which can be helpful to both Democrats and Republicans, and this varies from state to state.

A lot of your work is concerned with predicting electoral outcomes. How does your work differ from that of analysts like New York Times blogger Nate Silver?

Most academics are trying to develop a model they can use to make a prediction. For the general election, they’ll make a prediction and stick with it to test their model. A lot of the models you see in the media are based on polls.

Political scientist Kathleen Dolan specializes in the role of women in politics, and she shared her thoughts about the past, present and likely future of American women who run for elected office.

George McGovern famously said it would be easier to elect a black man president than a white women. We’ve elected a black man…

And we may elect a woman. We will have to see. But it is important to keep in mind that Hillary Clinton didn’t lose the Democratic nomination in 2008 because she was a woman. There were lots of traditional political influences at work – alongside the race and sex of the candidates – that shaped that election.

With regard to electing a woman president, one important explanation is the “pipeline” theory of candidacy. In general, successful presidential candidates are people who have served either in the U.S. Senate or as governors, and who served in lower state offices prior to that. While we’ve had – and have – women in those offices, there haven’t been as many of them as there have been men and they haven’t been serving as long. So to have more credible women candidates for president, we need more women with experience as senators or governors.

Do we have enough women running for office?

Other nations have elected women to their highest offices: What makes the U.S. different?

First is our presidential system. Many other countries use a parliamentary system for selecting their leaders.

In proportional systems, women can get more representation because it’s a smaller number of people who have to be convinced that women are viable candidates.

Finally, a lot of other countries have quota systems, in which a certain percentage of candidates have to be women.

Now, we see that when women are approached and asked to run for office, they are much more likely to do it. That suggests that a quota system might have an impact.

What about women voters?

Lots of people assume that women vote for women because of some shared gender identity. There is no evidence to support that. Now, the vast majority women who run for office in the

If she does win the nomination, it will be because she is able to convince men and women to vote for her.