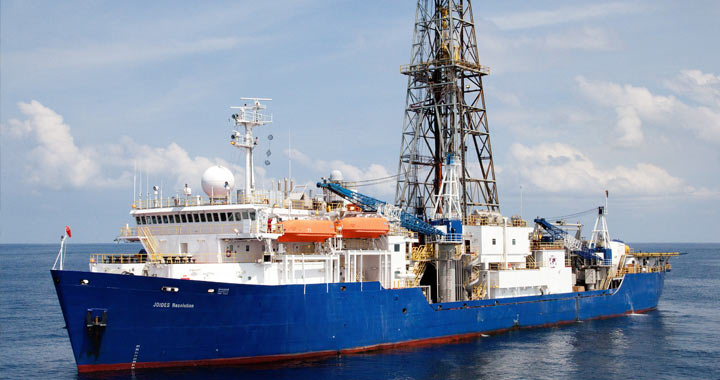 Julie Bowles will soon be pulling into port after two months at sea on an expedition to drill into the Earth’s crust, putting Jules Verne to shame.

Bowles is a professor of Geosciences at UWM who, since Nov. 30, has been working on the JOIDES Resolution research vessel alongside an international cohort of geoscientists and others to drill into the earth’s crust and analyze the core samples taken from the drilling hole. She and her colleagues hope to learn more about the earth’s geological composition. Beneath oceans and continents, the earth is composed of four layers: The crust, the mantle, and the outer and inner core.

“The expedition was designed to answer a lot of fundamental questions that we don’t really have answers to. This includes the structure and composition of oceanic lower crust, as well as the nature of the transition from crust to mantle. Our estimates of how thick ocean crust is come mostly from indirect observations of seismic waves. Current thinking is that at in some settings, these estimates are too deep,” Bowles said. “This is one of the big questions – will we drill through the crust-mantle boundary before we reach the seismic boundary? The seismic boundary is about 5 km below the sea surface. We don’t know how deep the crust-mantle boundary might be, but we know we’re almost certainly not going to get there on this expedition. This is just the first of three planned legs.”

Drilling through the crust

The JOIDES crew has been drilling into the Atlantis Bank in the Indian Ocean where the first few kilometers of the Earth’s crust have been removed through a faulting process, meaning the mantle is (presumably) easier to reach.

The JOIDES crew set a goal to reach 1,300 meters into the Earth’s crust, the third-deepest depth ever reached in sea floor drilling into the crust. The drill, housed in a series of pipes that reach to the ocean floor, has a bit covered in nubs of tungsten carbide, second only to diamonds in terms of its hardness.

Even so, the drill bit must be replaced after 40 hours of drilling.

Each time the drill goes down, it returns with core samples. The whole cores are photographed and some physical properties are measured before they are cut in half so crew members can make observations – the mineral composition of the samples, their structure, and so on. In the physical properties lab, scientists measure the core’s density, its magnetic susceptibility, and how fast seismic waves can travel through the rock. Microbiologists examine the core samples for signs of life so they can see if there are any organisms capable of living in the Earth’s crust.

“The Earth’s crust can be divided into oceanic crust and continental crust. Oceanic crust covers about two-thirds of the earth’s surface and it plays a major role in the geochemical cycle of earth. Oceanic crust is formed at mid-ocean ridges – essentially long chains of volcanoes that snake through the ocean,” Bowles explained. “The structure of the crust that’s formed at these ridges differs depending on how fast the ridge spreads apart. We’re drilling into crust that was formed at a slow-moving ridge. People have lots of different models for what they think it might look like, but it’s been so rarely tested that any extra bit of data we can get is important.”

Magnets in the crust

Bowles is specifically interested in the magnetic aspect of the crust. When the crust was originally formed, it was at least partly molten and it all cooled from very high temperatures. During this cooling process, some minerals in the rock, like magnetite, can record the direction of the earth’s current magnetic field.

“That’s useful for a number of reasons. When you use a compass, you think about it pointing north. In addition to pointing north, it’s going to point either up or down as well. The degree to which it points up or down depends on the latitude you’re at,” Bowles said. “We know these rocks erupted at a particular latitude, and we can measure the ‘inclination’ of the field in the rocks. If we don’t get the inclination that we would expect at that latitude, we know that the rocks have tilted. That information helps us to reconstruct how these rocks have rotated, which gets back to understanding the nature of the crust.”

In addition to looking at the inclination of the rocks, Bowles hoped to drill through a polarity reversal – a level of rock formed at a time when the Earth’s magnetic fields had reversed, meaning your compass would point to the south pole instead of the north. These reversals occur throughout Earth’s history and they get recorded in ocean crust as stripes of “normal” and “reverse” polarity as the crust forms and moves away from the mid-ocean ridges.

“We can measure the stripes from ships on the sea surface. However, this would be the first time we actually drilled through a magnetic reversal in the lower crust directly beneath one of the sea floor stripes,” Bowles said. “It will allow us to test our models of how that reversal boundary is actually recorded in the lower ocean crust.”

The importance of drilling

Despite scientific advances in our understanding of earth science, there is still much we don’t know about the Earth’s deeper structure and composition. Bowles hopes this expedition – and the next two expeditions that will hopefully follow, funding permitting – will increase mankind’s understanding about the geochemical cycles of our planet.

Bowles and her colleagues are scheduled to return to port on Jan. 30. The next two expeditions to continue drilling in hopes of reaching the earth’s mantle have not yet been scheduled – but Bowles hopes that if and when the JOIDES Resolution next sets sail, she’ll be on board.

You can learn more about the expedition at joidesresolution.org.